Laurel Hill has an average elevation of 2,700 ft (820 m) along its length, while there are individual "knobs" that rise above 2,900 ft (880 m). The highest point is above the Seven Springs Mountain Resort at 2,994 ft (913 m). Laurel Hill is flanked on its north end by the Conemaugh Gorge and on its south end by the Youghiogheny Gorge, both water gaps being approximately 1,700 ft (520 m) in depth. The ridge continues north of the Conemaugh Gorge for several miles as Rager Mountain, which reaches an elevation of 2,580 feet (790 m). South of the Youghiogheny Gorge, a short ridge, generally still labeled Laurel Hill, at the edge of Ohiopyle State Park, reaches above 2,920 feet (890 m).

The industrial city of Johnstown and historic borough of Ligonier are located near its northern end, while the recreational boroughs of Confluence and Ohiopyle are located towards its southern end. Two major highways cross Laurel Hill, the Pennsylvania Turnpike and U.S. Route 30. The abandoned Laurel Hill Tunnel goes beneath Laurel Hill. A number of smaller state roads cross at other points on the mountain.

Laurel Hill is made up of Mississippian and Pennsylvanian clastic sedimentary rocks, consisting mostly of conglomerate, sandstone, and shale. Formations include the Burgoon, Mauch Chunk, Pottsville, and Allegheny. The mountain is anticlinal in structure.

The Laurel Hill region shares the humid continental climate of the Mid-Atlantic region in which it is located.

The mountain ridge is oriented at right angles to approaching weather systems, forcing prevailing westerly airflows upward. As rising air cools, moisture in the air mass condenses; once reaching the saturation point, precipitation results. Laurel Hill may also act as a barrier to weather systems and slow the movement of storms, which has an impact on the local area and forms a microclimate. Although the mountain is not high enough to create its own weather, its orography is enough to gently nudge weather from hot to warm, cool to cold, and from rain to snow; along with moisture from the Great Lakes, the latter can result in heavy snowfall during winter months. The mountain ridge can be 5 to 10 °F (−15 to −12 °C) cooler than surrounding towns and valleys, depending on other weather variables.

Laurel Hill has a diversity of habitats, and with that comes a variety of birds and mammals. Ravens and wild turkeys are frequently seen, while the hermit thrush, Canada warbler, brown creeper, and winter wren all nest near the bog at Spruce Flats. During the summer, black-throated blue warblers, blue-headed and red-eyed vireos can be seen. Raptors on the mountain include the broad-winged, red-tailed and red-shouldered hawks, and barred owls.

Commonly seen mammals on the mountain include white-tailed deer, chipmunks, and red and gray squirrels. More elusive animals include the woodchuck, raccoon, and opossum. Black bear have also been seen, but are shy and reclusive and not likely to be encountered.

Snakes including the timber rattler and copperhead also make their home on Laurel Hill around rocks and scree areas.

Somerset County is a county located in the U.S. state of Pennsylvania. As of the 2010 census, the population was 77,742. Its county seat is Somerset. The county was created from part of Bedford County on April 17, 1795, and named after the county of Somerset in England.

The Allegheny Front is the major southeast- or east-facing escarpment in the Allegheny Mountains in southern Pennsylvania, western Maryland, eastern West Virginia, and western Virginia, USA. The Allegheny Front forms the boundary between the Ridge-and-Valley Appalachians to its east and the Appalachian Plateau to its west. The Front is closely associated with the Appalachian Mountains' Eastern Continental Divide, which in this area divides the waters of the Ohio/Mississippi river system, flowing to the Gulf of Mexico, from rivers flowing into Chesapeake Bay and from there into the Atlantic Ocean.

The Potomac Heritage Trail, also known as the Potomac Heritage National Scenic Trail or the PHT, is a designated National Scenic Trail corridor spanning parts of the mid-Atlantic region of the United States that will connect various trails and historic sites in Virginia, Maryland, Pennsylvania, and the District of Columbia. The trail network includes 710 miles (1,140 km) of existing and planned sections, tracing the natural, historical, and cultural features of the Potomac River corridor, the upper Ohio River watershed in Pennsylvania and western Maryland, and a portion of the Rappahannock River watershed in Virginia. The trail is managed by the National Park Service. 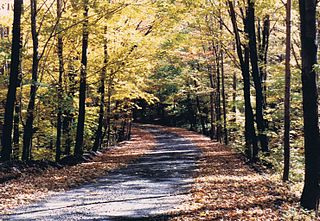 The Laurel Highlands is a region in southwestern Pennsylvania made up of Fayette County, Somerset County and Westmoreland County. It has a population of about 600,000 people.

Mount Davis is the highest point in Pennsylvania. Located in the 5,685-acre (2,301 ha) Forbes State Forest near the hamlet of Markleton in Elk Lick Township, Somerset County; it lies on a gentle crest of a 30-mile (50 km) ridge line extending from central Somerset County southward into Garrett County, Maryland known as Negro Mountain.

Bear Run is a 5.0-mile-long (8.0 km) tributary of the Youghiogheny River in Fayette County, Pennsylvania, in the United States. 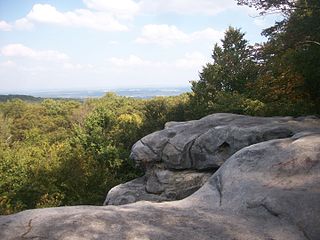 Indian Creek is a 31.0-mile-long (49.9 km) tributary of the Youghiogheny River in Fayette County, Pennsylvania in the United States. 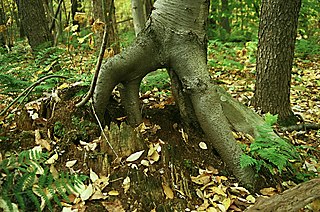 The Laurel Highlands Hiking Trail is a 70-mile (110 km) hiking trail in southwestern Pennsylvania, which largely follows the Laurel Hill geologic formation. Some of the trail is within the boundaries of various tracts of Laurel Ridge State Park. The trail begins at Ohiopyle State Park and travels generally to the northeast, and ends at Conemaugh Gorge near Johnstown. The trail goes through state forests, state parks, state game lands, and some privately owned lands. Laurel Highlands Hiking Trail is open year-round and is marked with yellow blazes, with large wooden signs at every major highway crossing. Connector trails are marked with blue blazes; those trails connect the main trail with parking and shelter areas. Six parking lots at the highway crossings provide starting points; some have access to drinking water. Construction of the trail began in 1970. 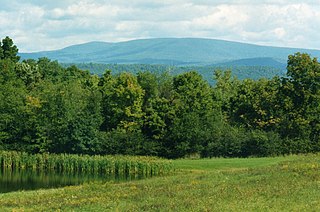 Blue Knob is a Pennsylvania summit with a broad dome that is the northernmost 3,000-footer in the range of Allegheny Mountains. It is the highest point in Bedford County.

Kentuck Knob, also known as the Hagan House, is a house designed by the American architect Frank Lloyd Wright in rural Stewart Township near the village of Chalk Hill, Fayette County, Pennsylvania, USA, 45 miles (72 km) southeast of Pittsburgh. It was designated a National Historic Landmark in 2000 for the quality of its architecture.

Woody's Knob, at an elevation of 4,170 feet, is a summit or "knob" in the Blue Ridge Mountains and one of the highest points in the unincorporated village of Little Switzerland and in Mitchell County, North Carolina.

The Pennsylvanian Pottsville Formation is a mapped bedrock unit in Pennsylvania, western Maryland, West Virginia, Ohio, and Alabama. It is a major ridge-former in the Ridge-and-Valley Appalachians of the eastern United States. The Pottsville Formation is conspicuous at many sites along the Allegheny Front, the eastern escarpment of the Allegheny or Appalachian Plateau. 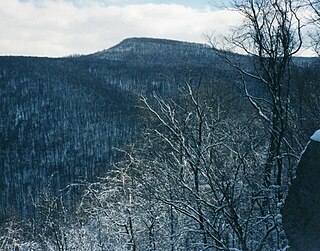 Sugarloaf Knob is a well-known summit within Ohiopyle State Park on the south end of the Laurel Ridge. This mountain has a unique profile and can easily be recognized at different lookouts in the park and surrounding area. The Youghiogheny River cuts beneath the "knob" and Laurel Hill creating a 1,700-foot (520 m) deep chasm. The highest peak in the area is the south end of the Laurel Hill Ridge as it reaches 2,920 ft (890 m) above sea level.