Laurence Monroe Klauber (December 21, 1883 in San Diego, California – May 8, 1968), was an American herpetologist and the foremost authority on rattlesnakes. He was the first curator of reptiles and amphibians at the San Diego Natural History Museum [1] and Consulting Curator of Reptiles for the San Diego Zoo. [2] He was also a businessman, inventor, and contributed to mathematics in his study of the distribution of prime numbers.

The youngest of Theresa Epstein and Abraham Klauber's twelve children, Klauber was born on December 21, 1883 in San Diego, California. He received his A.B. degree (Electrical Engineering) from Stanford University in 1908 and completed a Westinghouse graduate apprenticeship course in 1910. He married Grace Gould in 1911, and in that same year began his career with San Diego Gas & Electric Company. He received an honorary LL.D. from the University of California, Los Angeles in 1941. [3] Klauber died on May 8, 1968 in San Diego. [4]

Before becoming a herpetologist, Klauber worked for many years with the San Diego Gas & Electric Company. He worked his way up in the company from his first job as electric sign salesman thru electrical engineering positions; ultimately he became president in 1947, then Chairman of the Board of Directors, a position he held from 1950 until his retirement in 1953. [2] Klauber held 9 U.S. patents (2 jointly) for inventions relating to energy transmission.

In 1923, Dr. Harry M. Wegeforth of the newly opened San Diego Zoo asked Klauber to identify several species of snake recently acquired. [2] Even though reptiles were not much more than a hobby to him at the time, he took the job and eventually became Consulting Curator of Reptiles. In addition, he became a member of the Zoological Society's Board of Trustees in 1945, and served as its President from 1949 to 1951. [2] As curator, he dedicated the following 35 years of his life to the study of reptiles, and rattlesnakes in particular. The end result of that considerable amount of time and amassed data was his magnum opus, the two-volume book entitled Rattlesnakes: Their Habits, Life Histories and Influence on Mankind, published in 1956. It is still considered to be the most complete and authoritative resource ever written on rattlesnakes. [5]

In his research and field work, Klauber is credited with identifying 53 new taxa of reptiles and amphibians (such as Arizona elegans candida , Sonora palarostris , Pituophis catenifer pumilis , and Charina bottae umbratica ) and has been recognized by his fellow herpetologists by having had 14 new taxa named after him (such as Chionactis occipitalis klauberi , Crotalus lepidus klauberi , Ensatina eschscholtzii klauberi , Hemidactylus klauberi , Hypsiglena torquata klauberi , Sauromalus klauberi , Sphaerodactylus klauberi , and Terrapene nelsoni klauberi ). [6] He donated approximately 36,000 specimens to the San Diego Natural History Museum, and his extensive personal library and field notes were donated there upon his death.

In the early 1930s, Klauber proposed a geometric arrangement of primes not unlike Ulam's spiral. [8] In 1932, Klauber presented a paper on a triangular, non-spiral matrix to the Mathematical Association of America demonstrating geometric regularity in the distribution of the primes. [9] The lines of primes in the Klauber triangle meet at 60° angles, while in an Ulam Spiral, they meet at 90° angles. [10] [11]

Klauber's interest in mathematics—and the extensive samples of rattlesnakes that he accumulated for study—led to his most significant contribution to herpetology, the application of statistical methods to aid in the classification of reptiles. He pioneered the use of quantitative analysis in herpetology to determine variation in snakes and to weight the differences between species and subspecies. [12] [13] [14]

The Ulam spiral or prime spiral is a graphical depiction of the set of prime numbers, devised by mathematician Stanisław Ulam in 1963 and popularized in Martin Gardner's Mathematical Games column in Scientific American a short time later. It is constructed by writing the positive integers in a square spiral and specially marking the prime numbers. 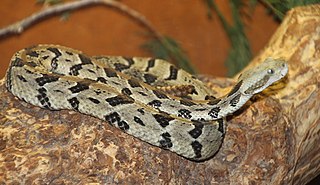 Crotalus is a genus of venomous pit vipers in the family Viperidae, known as rattlesnakes or rattlers. The genus is found only in the Americas from southern Canada to northern Argentina, and member species are colloquially known as rattlesnakes. The generic name Crotalus is derived from the Greek word κρόταλονkrótalοn, which means "rattle" or "castanet", and refers to the rattle on the end of the tail, which makes this group so distinctive. Currently, 32 to 45 species are recognized as being valid. 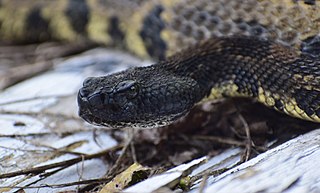 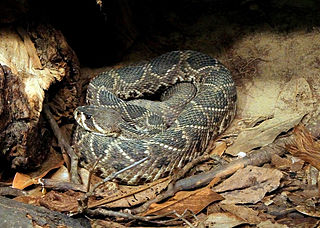 The eastern diamondback rattlesnake is a species of venomous pit viper in the family Viperidae. The species is endemic to the Southeastern United States. It is one of the heaviest venomous snakes in the Americas and the largest rattlesnake. No subspecies are recognized. 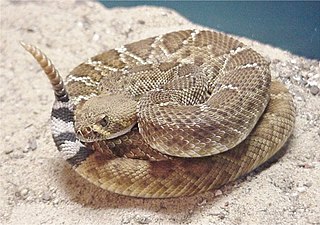 Crotalus ruber is a venomous pit viper species found in southwestern California in the United States and Baja California in Mexico. Three subspecies are currently recognized, including the nominate subspecies described here.

Crotalus mitchellii is a venomous pit viper species in the family Viperidae. The species is endemic to the Southwestern United States and adjacent northern Mexico. The species was named in honor of Silas Weir Mitchell (1829–1914), an American medical doctor who also studied rattlesnake venoms. Five subspecies are currently recognized, including the nominate subspecies described here. 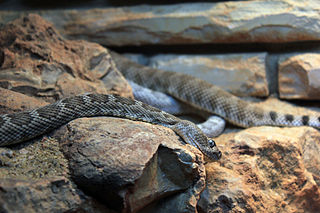 The Santa Catalina rattlesnake is a species of venomous pit viper endemic to Isla Santa Catalina in the Gulf of California just off the east coast of the state of Baja California Sur, Mexico. No subspecies are currently recognized. A relatively small and slender species, its most distinctive characteristic is that it lacks a rattle. 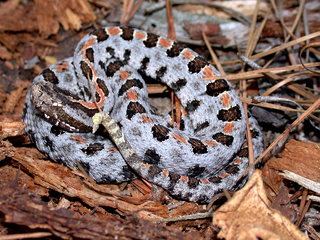 Sistrurus miliarius, commonly called the pygmy rattlesnake, is a species of venomous snake in the subfamily Crotalinae of the family Viperidae. The species is endemic to the Southeastern United States. Three subspecies are currently recognized.

Chapman Grant was an American herpetologist, historian, and publisher. He was the last living grandson of United States President Ulysses S. Grant.

Hobart Muir Smith, born Frederick William Stouffer, was an American herpetologist. He is credited with describing more than 100 new species of American reptiles and amphibians. In addition, he has been honored by having at least six species named after him, including the southwestern blackhead snake, Smith's earth snake, Smith's arboreal alligator lizard, Hobart's anadia, Hobart Smith's anole, and Smith's rose-bellied lizard. At 100 years of age, Smith continued to be an active and productive herpetologist. Although he published on a wide range of herpetological subjects, his main focus throughout his career was on the amphibians and reptiles of Mexico, including taxonomy, bibliographies, and history. Having published more than 1,600 manuscripts, he surpassed all contemporaries and remains the most published herpetologist of all time.

Charles Mitchill Bogert was an American herpetologist, and curator of herpetology and researcher for the American Museum of Natural History. 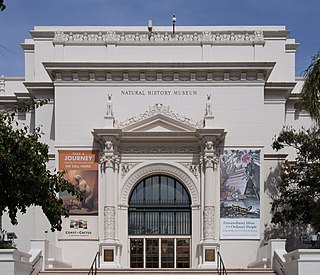 The San Diego Natural History Museum is a museum located in Balboa Park in San Diego, California. It was founded in 1874 as the San Diego Society of Natural History. It is the second oldest scientific institution west of the Mississippi and the oldest in Southern California. The present location of the museum was dedicated on January 14, 1933. A major addition to the museum was dedicated in April 2001, doubling exhibit space.

Crotalus atrox tortugensis is a venomous pit viper subspecies found only on Tortuga Island in the Gulf of California.

Herpetological society is a commonly used term for a club or organized group of reptile and amphibian enthusiasts. The term is derived from herpetology - the branch of zoology dealing with the study of those organisms. 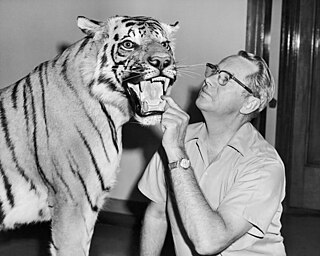 Wilmer Webster Tanner was an American zoologist, professor and curator. He was associated with Brigham Young University (BYU), in Provo, Utah for much of his life and published extensively on the snakes and salamanders of the Great Basin.

Sauromalus klauberi, commonly called the Catalina chuckwalla or the spotted chuckwalla, is a species of chuckwalla, a lizard in the family Iguanidae. The species was first identified in 1941.

Margaret R. Wood Bancroft, was an American naturalist and explorer of Baja California. She was also a social leader.