Eleutherios is an epithet may refer to:

Magnesia, Ancient Greek: Magnēsía, deriving from the tribe name Magnetes, is one of the regional units of Greece. It is part of the region of Thessaly. Its capital is the city of Volos. About 70% of the population of Magnesia live in the Greater Volos area, which is the second-largest city in Thessaly and the third busiest commercial port in Greece.

Papadopoulos, sometimes transliterated as Papadopulos, is the most common Greek surname. It is used in Greece, Cyprus and countries of the Greek diaspora as well, such as the USA, United Kingdom, Australia and Scandinavian countries. It means "son of a priest". Its female version is Papadopoulou (Παπαδοπούλου).

Miltos Sachtouris or Miltos Sahtouris was a Greek poet. He was a descendant of Georgios Sachtouris which had origins from Ydra island. When he was young he aborted his law studies to follow his real passion, poetry, and adopted the pen name Miltos Chrysanthis. Sachtouris then wrote his first poem, The Music Of My Islands, under his pen name, in 1941.

Lefter Küçükandonyadis was a Turkish professional footballer of Greek descent, who played as a forward. He is often recognized as one of the greatest strikers to play for Fenerbahçe and Turkey. Having won several regional and national championship titles with Fenerbahçe and becoming Turkish top scorer twice in his career, he left an imprint on the history of the club. Lefter is one of a few players whose names are included in the Fenerbahçe Anthem.

Caterina is a feminine given name. It is an Italian and Catalan form of the name Katherine. It may refer to:

Lefteris Pantazis who is often called by the nickname LEPA by the media and his fans, is a Greek singer. He was born Eleftherios Pagkozidis on 27 March 1955 to Pontic Greek parents in Tashkent, Uzbek SSR, in the USSR. His parents repatriated to Greece as refugees in the 1960s.

Niki Volos Football Club is a Greek professional football club based in the city of Volos, in the region of Magnesia, Greece. The club currently competes in Gamma Ethniki, the 3rd league of Greek football. It is the most historic team in Volos since it holds 26 local titles in its potential, although it has only 6 entries in the First National Division.

ONAR, composed of Lefteris Pliatsikas and Penny Ramadani, is a renowned Greek pop rock group. The band's name seems to be a reference to the ancient Greek word ὄναρ "dream".

Κάλπικη λίρα is a Greek comedy-drama film, produced in 1955, written and directed by Giorgos Tzavellas and starring Dimitris Horn, Ilia Livykou and Vassilis Logothetidis. At the 2006 International Thessaloniki Film Festival, the film was announced as among the 10 all-time best Greek films by the PHUCC.

Madalena is a 1960 Greek comedy film directed by Dinos Dimopoulos. It was entered into the 1961 Cannes Film Festival. The film won three awards in the 1st Thessaloniki Film Festival

The Policeman of the 16th Precinct is a 1959 Greek comedy film directed by Alekos Sakellarios.

We Have Only One Life is a 1958 Greek comedy film directed by George Tzavellas.

A Hero in His Slippers is a 1958 Greek comedy film directed by Alekos Sakellarios. 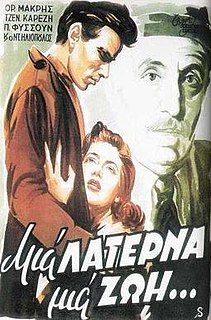 One Street Organ, One Life or Mia laterna, Mia Zoi is a 1958 Greek film directed by Sokrates Kapsaskis and written by Yorgos Javellas. It stars Orestis Makris, Jenny Karezi, Petros Fyssoun, Dinos Iliopoulos, Nitsa Tsaganea and Lavrentis Dianellos. The film is about a street musician who loses his wife during childbirth and puts his baby daughter up for adoption, but comes to bitterly regret it.

Lavrentis is a Greek given name and surname