Lawrence Sidney Eagleburger (August 1, 1930 – June 4, 2011) was an American statesman and career diplomat, who served briefly as the Secretary of State under President George H. W. Bush. Previously, he had served in lesser capacities under Presidents Richard Nixon, Jimmy Carter, and Ronald Reagan, and as Deputy Secretary of State under George H. W. Bush.

Eagleburger is the only career Foreign Service Officer to have served as Secretary of State. [1]

He had three sons, all of whom are named Lawrence Eagleburger, though they have different middle names (Scott, Andrew and Jason). [3] The eldest is from his first marriage, which ended in divorce. The other two are from his second marriage, which was to Marlene Ann Heinemann from 1966 until her death in 2010. [4]

In 1957, Eagleburger joined the United States Foreign Service, and served in various posts in embassies, consulates, and the Department of State. From 1961 to 1965 he served as a staffer at the U.S. Embassy in Belgrade, Yugoslavia. He was known as the person who handled the Skopje 1963 earthquake crisis, and managed the first US-Soviet humanitarian cooperation, after which he was nicknamed Lawrence of Macedonia.

Starting in 1969, he served in the Nixon administration as an assistant to National Security Advisor Henry Kissinger. He stayed in this appointment until 1971; thereafter he took on several positions, including advisor to the U.S. Mission to NATO in Brussels, and, following Kissinger's appointment as Secretary of State, a number of additional posts in the State Department and Deputy Assistant Secretary of Defense (1971–73).

Following Nixon's resignation, he briefly left government service. He was then named the Executive Secretary to the Secretary of State from 1975 to 1977, [5] and subsequently was appointed as ambassador to Yugoslavia by President Jimmy Carter, a post he held from 1977 to 1980. While working as Executive Secretary to Kissinger in 1975 he carried out secret talks with the Cubans in New York City. [6]

From May 14, 1981, to January 26, 1982, Eagleburger was Assistant Secretary of State for European Affairs. [5] In 1982, Reagan appointed him as Undersecretary of State for Political Affairs (the State Department's third-ranking position), a position he held for several years. He then became president of Kissinger Associates, a consultancy firm which provided firms with advice on international politics. [7] In 1989, President George H. W. Bush appointed him Deputy Secretary of State (the Department's second-ranking position); he also served as the President's primary advisor for affairs relating to the quickly disintegrating Yugoslavia. On August 23, 1992, James Baker resigned as Secretary of State (to manage Bush's unsuccessful re-election campaign), and Eagleburger served as Acting Secretary of State until Bush gave him a recess appointment for the remainder of the Bush administration.

His period as advisor for Yugoslavian affairs from 1989 to 1992 was controversial as he gained a reputation for being a strong Serbian partisan. This perceived partisanship led the European press to dub him Lawrence of Serbia [8] (a reference to Lawrence of Arabia). Eagleburger had controversial ties to Yugoslavia both in promoting loans to Yugoslavia as a government official and later serving on the board of a Yugoslav bank as well as with Yugo Motors, USA. [9]

In 1991, President Bush awarded him the Presidential Citizens Medal. He was a member of the board of directors of the International Republican Institute. [10]

Eagleburger became chairman of the International Commission on Holocaust Era Insurance Claims, or ICHEIC, which was set up in 1998. The purpose of the Commission was to resolve unpaid Nazi-era insurance claims for survivors of the Holocaust. In 2005, Eagleburger announced that the ICHEIC was offering approximately 16 million dollars to Holocaust victims and their heirs, noting as he did so the research ability of the ICHEIC staff which allowed them to evaluate claims from companies which no longer existed. [11] [ clarification needed ] In the years prior to this there had been some controversy about the Commission, including reports that it was over-budgeted and too slow, and that insurance companies which had previously agreed to work with the ICHEIC had failed to disclose policyholder lists. [12] Eagleburger responded to these accusations by saying, among other things, that it was difficult to work quickly when many of the claimants lacked basic information such as the name of the insurance company involved. [13]

After serving in the Foreign Service for 27 years, Eagleburger retained an interest in foreign policy and was a familiar figure on current events talk shows. He caused some discussion with public comments about President George W. Bush's foreign policy. In August 2002, Eagleburger questioned the timing of possible military action in Iraq, saying, "I am not at all convinced now that this is something we have to do this very moment." [14] He did indicate he believed that Iraqi regime change could be a legitimate U.S. endeavor at some point, but that at that time he did not believe the administration was fully prepared for such a conflict. [15] In April 2003, following warnings by the Bush administration to the government of Syria, Eagleburger condemned the possibility of military action in Syria or Iran, saying that public opinion would not support such a move and that "If President Bush were to try it now, even I would feel he should be skinned alive." [16]

On January 5, 2006, he participated in a meeting at the White House of former Secretaries of Defense and State to discuss United States foreign policy with Bush administration officials. On November 10, 2006 it was announced that he would replace Secretary of Defense designate Robert Gates in the Iraq Study Group. [17]

After the election of Iranian president Mahmoud Ahmadinejad, Eagleburger seemed to think that Iran was moving in a direction which may at some point call for military action, saying in an interview that while "we should try everything else we can first", at some point it would probably be necessary to use force to ensure that Iran did not obtain or use nuclear weapons. [18]

He was Chairman of the Board of Trustees for The Forum for International Policy, and a member of the Washington Institute for Near East Policy (WINEP) Board of Advisors.

Before the Republican primaries, Eagleburger endorsed John McCain for President. [19] In an NPR interview on October 30, 2008, he described McCain's running-mate Sarah Palin as "not prepared" for top office. He also stated that many vice presidents have not been ready. [20] The next day, in an interview on Fox News, he retracted his comments about Palin. [21]

On October 30, 2008, on the Fox News Channel, Eagleburger referred to Democratic presidential nominee Barack Obama as a "charlatan", citing his fundraising methods and other aspects of his presidential campaign. [22]

Eagleburger died of pneumonia at the University of Virginia Medical Center in Charlottesville, Virginia, on June 4, 2011. [23] [24] He was 80 and had lived outside Charlottesville since 1990. He is survived by his three sons. [4]

President Barack Obama described Eagleburger as a "distinguished diplomat and public servant who devoted his life to the security of our nation and to strengthening our ties with allies and partners." Former President George H. W. Bush described Eagleburger as "a tireless patriot, principled to the core, selflessly devoted to America and his duty." [25] Vice President Joe Biden remarked "The post-Cold War world...is more stable and secure because of Eagleburger's service." "Larry believed in the strength of America's values, and he fought for them around the world," said Secretary of State Hillary Clinton. [26]

Lawrence and his wife Marlene Ann are both interred at Arlington National Cemetery.

This article is about the history of the United States National Security Council during the first Bush Administration, 1989–1993.

Paul Dundes Wolfowitz is an American political scientist and diplomat who served as the 10th President of the World Bank, U.S. Deputy Secretary of Defense, U.S. Ambassador to Indonesia, and former dean of Johns Hopkins SAIS. He is currently a visiting scholar at the American Enterprise Institute. 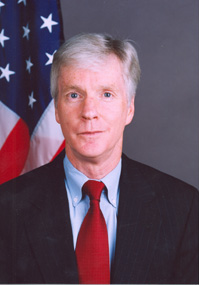 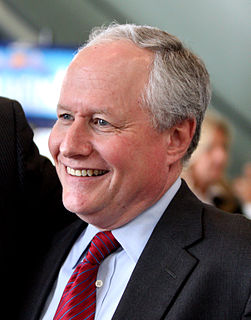 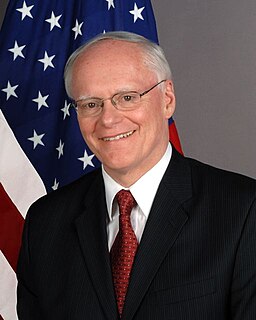 James Franklin Jeffrey is an American diplomat who serves as the United States Special Representative for Syria Engagement and the Special Envoy for the Global Coalition to Defeat ISIL. He is a senior American diplomat and expert in political, security, and energy issues in the Middle East, Turkey, Germany, and the Balkans.

Kissinger Associates, Inc. is a New York City-based international geopolitical consulting firm, founded and run by Henry Kissinger since 1982. The firm assists its clients in identifying strategic partners and investment opportunities and advising them on government relations.

John Dimitri Negroponte is an American diplomat. He is currently a James R. Schlesinger Distinguished Professor at the Miller Center for Public Affairs at the University of Virginia. He is a former J.B. and Maurice C. Shapiro Professor of International Affairs at the George Washington University's Elliott School of International Affairs. Prior to this appointment, he served as a research fellow and lecturer in international affairs at Yale University's Jackson Institute for Global Affairs, United States Deputy Secretary of State (2007–2009), and the first ever Director of National Intelligence (2005–2007).

Elliott Abrams is an American diplomat and lawyer, who has served in foreign policy positions for Presidents Ronald Reagan, George W. Bush, and Donald Trump. Abrams is considered to be a neoconservative. He is currently a senior fellow for Middle Eastern studies at the Council on Foreign Relations. On January 25, 2019, he was appointed as Special Representative for Venezuela. 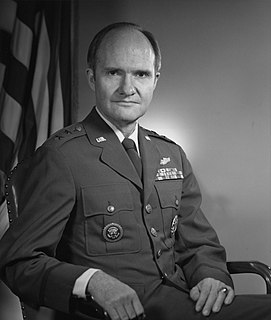 Brent Scowcroft was a United States Air Force officer who was a two-time United States National Security Advisor, first under U.S. President Gerald Ford and then under George H. W. Bush. He served as Military Assistant to President Richard Nixon and as Deputy Assistant to the President for National Security Affairs in the Nixon and Ford administrations. He served as Chairman of the President's Foreign Intelligence Advisory Board under President George W. Bush from 2001 to 2005 and assisted President Barack Obama in choosing his national security team.

Sir David Geoffrey Manning, is a former British diplomat, who was the British Ambassador to the United States from 2003 to 2007. He authored the so-called "Manning Memo" summarising the details of a January 2003 meeting between American president George W. Bush and British prime minister Tony Blair during the run-up to the invasion of Iraq. Until 2019 he was appointed to the Household of TRH the Duke and Duchess of Cambridge and the Duke and Duchess of Sussex.

Robert Dean Blackwill is a retired American diplomat, author, senior fellow at the Council of Foreign Relations, and lobbyist. Blackwill served as the United States Ambassador to India under President George W. Bush from 2001 to 2003 and as United States National Security Council Deputy for Iraq from 2003 to 2004, where he was a liaison between Paul Bremer and Condoleezza Rice.

Kenneth Lee Adelman is an American diplomat, political writer, policy analyst and William Shakespeare scholar. Adelman has been a member of the board of directors of the global data collection company RIWI Corp. since June 2016.

The Iraq Study Group (ISG) also known as the Baker-Hamilton Commission was a ten-person bipartisan panel appointed on March 15, 2006, by the United States Congress, that was charged with assessing the situation in Iraq and the US-led Iraq War and making policy recommendations. The panel was led by former Secretary of State James Baker and former Democratic congressman from Indiana, Lee H. Hamilton and was first proposed by Virginia Republican Representative Frank Wolf. 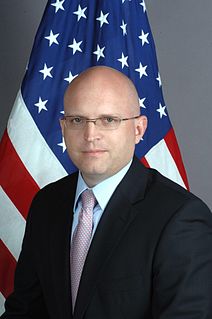 Richard Harvey Solomon was an American diplomat and academic who served as Director of Policy Planning from 1986 to 1989, Assistant Secretary of State for East Asian and Pacific Affairs from 1989 to 1992, and U.S. Ambassador to the Philippines from 1992 to 1993. In September 1993, he became president of the United States Institute of Peace, a position he held until September 2012. He subsequently joined the RAND Corporation as a Senior Fellow. 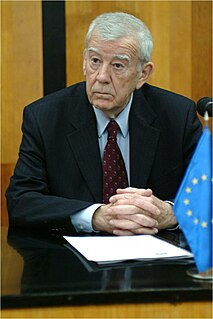