Leslie was born in Edinburgh. As a boy, he was run over by a truck and advised by doctors that he may not regain the ability to walk. [6]

Leslie began playing football with Hawkhill Amateurs. In the early 1950s, he turned semi-pro and joined Newtongrange Star. He played for his regimental side at Oswestry after joining the Royal Artillery in 1956. Lawrie signed pro forms with Hibernian following a trial that Army compatriot and Hibs player Jock Buchanan had suggested he apply for. After initially competing for his place with Tommy Younger, he became the club's first choice 'keeper and was in the Hibs side that reached the 1958 Scottish Cup Final, which they lost 1–0 to Clyde. [7] After playing 98 matches for the Easter Road side he moved to Airdrie in November 1959 for £4,475. Leslie spent two seasons at Broomfield Park and became club captain. [6] He was later inducted into the club's Hall of Fame. [8]

Leslie moved to West Ham United in 1961 for £14,000. He won 'Hammer of the Year' at the end of his first season, becoming the first goalkeeper to earn the accolade. [7] The following season, Leslie suffered a broken leg in a game against Bolton Wanderers on 3 November 1962, but managed to regain fitness for the final four games of the campaign. After falling out of favour at West Ham at the start of the 1963–64 season - by this time Leslie's replacement, Jim Standen had established himself as the Hammers' first choice goalkeeper-, he requested a transfer. [6]

After 61 league and cup appearances for the east London club, [9] Leslie joined Stoke City for a fee of £14,000 in October 1963 and in his first season helped the club to reach the League Cup Final. [5] Leslie played in the first leg of the final at Stoke's Victoria Ground, a 1–1 draw, but he was injured for the decisive second leg. Reserve 'keeper Bobby Irvine stepped in and Stoke lost the game 3–2. [5] In the 1964–65 season, Leslie made the number one spot his own as the missed just two matches out of 50. [5] He lost his first choice status in 1965–66 due to the emergence of John Farmer and he left in the summer of 1966 for Millwall. [5] He spent two seasons at The Den before finishing his career with Southend United. [1]

Leslie won five caps for the Scottish national team while with Airdrie, all during the 1960–61 season. [10] His international debut came on 22 October 1960, against Wales; Scotland lost the game 2–0, but his performance earned many plaudits. He was due to play for Scotland in the infamous 9–3 defeat by England at Wembley, but he was injured one week beforehand and Frank Haffey was selected instead. [7]

After his retirement from playing, Leslie coached at Southend and went on to a role as trainer-coach at Millwall. He was later involved in coaching schools football. [6] [7] 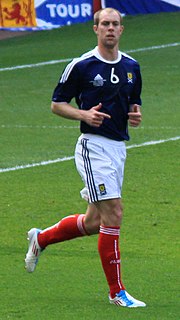 Steven Gordon Whittaker is a Scottish professional footballer who plays as a defender for Dunfermline Athletic.

Lawrance Reilly was a Scottish footballer. He was one of the "Famous Five", the Hibernian forward line during the late 1940s and early 1950s, along with Bobby Johnstone, Gordon Smith, Eddie Turnbull, and Willie Ormond. Reilly is rated amongst the top forwards in Scottish football history and was inducted into the Scottish Football Hall of Fame in 2005.

The 1996–97 season was the 100th season of competitive football in Scotland. This season saw a playoff system introduced between the second bottom club in the Premier Division and the second top club in Division One.

Darren McCormack is a Scottish professional footballer who plays as a defender.

Gareth John Evans is an English football player and coach. He played for Coventry City, Rotherham United, Hibernian, Stoke City, Northampton Town, Partick Thistle, Airdrie and Alloa Athletic. Evans has been the caretaker manager of Hibernian and Livingston, and was head coach of the Scotland women's under-19 national team for four years. 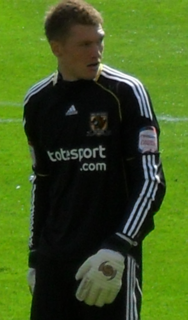 Mark Thomas Oxley is an English professional footballer who plays as a goalkeeper for Southend United.

William Fraser Russell was a Scottish professional footballer who played as an inside right. He scored both goals for Airdrieonians in the 1924 Scottish Cup Final.

Ross Laidlaw is a Scottish footballer who plays as a goalkeeper for Ross County. He has previously played for Raith Rovers, Elgin City, Hibernian and Dundee United. 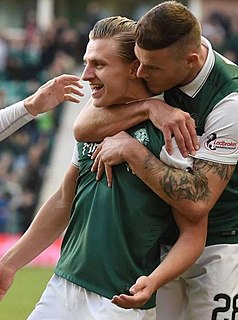 Jason Steven Cummings is a Scottish professional footballer who plays as a striker for Dundee.

Scott Stewart is a Scottish footballer who plays for Arbroath as a full-back or midfielder. He began his career at Airdrieonians.