Le Figaro (French pronunciation: ​ [lə fiɡaʁo] ) is a French daily morning newspaper founded in 1826. It is headquartered on Boulevard Haussmann in the 9th arrondissement of Paris. [9] The oldest national newspaper in France, Le Figaro is one of three French newspapers of record, along with Le Monde and Libération . [9]

It was named after Figaro, a character in a play by polymath Beaumarchais (1732–1799); one of his lines became the paper's motto: "Sans la liberté de blâmer, il n'est point d'éloge flatteur" ("Without the freedom to criticise, there is no flattering praise"). With a centre-right editorial line, it is the largest national newspaper in France, ahead of Le Parisien and Le Monde . In 2019, the paper had an average circulation of 321,116 copies per issue. [7] The paper is published in Berliner format.

Since 2012 its editor (directeur de la rédaction) has been Alexis Brézet. The newspaper has been owned by Dassault Group since 2004. [10] Other Groupe Figaro publications include Le Figaro Magazine , TV Magazine and Evene.

Le Figaro was founded as a satirical weekly in 1826, [11] [12] taking its name and motto from Le Mariage de Figaro , the 1778 play by Pierre Beaumarchais that poked fun at privilege. Its motto, from Figaro's monologue in the play's final act, is "Sans la liberté de blâmer, il n'est point d'éloge flatteur" ("Without the freedom to criticise, there is no flattering praise"). In 1833, editor Nestor Roqueplan fought a duel with a Colonel Gallois, who was offended by an article in Le Figaro, and was wounded but recovered. [13] Albert Wolff, Émile Zola, Alphonse Karr, Théophile Gautier, and Jules Claretie were among the paper's early contributors. It was published somewhat irregularly until 1854, when it was taken over by Hippolyte de Villemessant.

In 1866, Le Figaro became a daily newspaper. [14] Its first daily edition, that of 16 November 1866, sold 56,000 copies, having highest circulation of any newspaper in France. Its editorial line was royalist. [15] Pauline Savari was among the contributors to the paper at this time.

On 20 February 1909 Le Figaro published a manifesto signed by Filippo Tommaso Marinetti which initiated the establishment of Futurism in art. [16]

On 16 March 1914, Gaston Calmette, the editor of Le Figaro, was assassinated by Henriette Caillaux, the wife of Finance Minister Joseph Caillaux, after he published a letter that cast serious doubt on her husband's integrity. [17] In 1922, Le Figaro was purchased by perfume millionaire François Coty. [18] Abel Faivre did cartoons for the paper. [19] Coty enraged many in March 1929 when he renamed the paper simply Figaro, which it remained until 1933. [20]

By the start of World War II, Le Figaro had become France's leading newspaper. After the war, it became the voice of the upper middle class, and continues to maintain a conservative position.

In 1975, Le Figaro was bought by Robert Hersant's Socpresse. In 1999, the Carlyle Group obtained a 40% stake in the paper, which it later sold in March 2002. Since March 2004, Le Figaro has been controlled by Serge Dassault, [11] a conservative businessman and politician best known for running the aircraft manufacturer Dassault Aviation, which he inherited from his father, its founder, Marcel Dassault (1892–1986). Dassault owns 80% of the paper, by way of its media subsidiary Groupe Figaro. [11]

In 2006, Le Figaro was banned in Egypt and Tunisia for publishing articles allegedly insulting Islam. [21] [22]

Le Figaro switched to Berliner format in 2009. [23] The paper has published The New York Times International Weekly on Friday since 2009, an 8-page supplement featuring a selection of articles from The New York Times translated into French. In 2010, Lefigaro.fr created a section called Le Figaro in English, [24] which provides the global English-speaking community with daily original or translated content from Le Figaro's website. The section ended in 2012. [25]

The newspaper's ownership by Serge Dassault was a source of controversy in terms of conflict-of-interest, as Dassault also owned a major military supplier and served in political positions from the Union for a Popular Movement party. His son Olivier Dassault served as a member of the French National Assembly. [27] Dassault has remarked in an interview in 2004 on the public radio station France Inter that "newspapers must promulgate healthy ideas" and that "left-wing ideas are not healthy ideas." [28]

In February 2012, a general assembly of the newspaper's journalists adopted a motion accusing the paper's managing editor, Étienne Mougeotte, of having made Le Figaro into the "bulletin" of the governing party, the Union for a Popular Movement, of the government and of President Nicolas Sarkozy. They requested more pluralism and "honesty" and accused the paper of one-sided political reporting. Mougeotte had previously said that Le Figaro would do nothing to embarrass the government and the right. [29] [30] [31] Mougeotte publicly replied: "Our editorial line pleases our readers as it is, it works. I don't see why I should change it. [...] We are a right-wing newspaper and we express it clearly, by the way. Our readers know it, our journalists too. There's nothing new to that!" [32]

Libération, popularly known as Libé, is a daily newspaper in France, founded in Paris by Jean-Paul Sartre and Serge July in 1973 in the wake of the protest movements of May 1968. Initially positioned on the far-left of France's political spectrum, the editorial line evolved towards a more centre-left stance at the end of the 1970s. Its editorial stance was centre-left as of 2012.

The National Union of Students of France is the largest national students' union in France. It is historically close to the Socialist Party, with many of its member joining the party after leaving student life.

Éric Justin Léon Zemmour is a French far-right politician, essayist, writer and former political journalist and pundit. He was an editor and panelist on Face à l'Info, a daily show broadcast on CNews, from 2019 to 2021. He unsuccessfully ran in the 2022 French presidential election, in which he placed fourth in the first round.

CNews is a French free-to-air news channel launched on 4 November 1999 by Canal+ Group. It provides 24-hour national and global news coverage. It is the second most watched news network in France, after BFM TV and before LCI and France Info. i>Télé was renamed CNews on 27 February 2017. It has a right-wing editorial stance, and is often compared to the American TV channel Fox News.

The 2017 French presidential election was held on 23 April and 7 May 2017. As no candidate won a majority in the first round, a runoff was held between the top two candidates, Emmanuel Macron of En Marche! (EM) and Marine Le Pen of the National Front (FN), which Macron won with a difference of more than 30% of the vote. The presidential election was followed by a legislative election to elect members of the National Assembly on 11 and 18 June. Incumbent president François Hollande of the Socialist Party (PS) was eligible to run for a second term, but declared on 1 December 2016 that he would not seek reelection in light of low approval ratings, making him the first incumbent head of state of the Fifth Republic not to seek reelection.

Minute is a weekly newspaper, initially right-wing but later far-right, circulated in France from 1962 to 2020. Its editorial position is satirical and conservative. According to figures provided by the paper's management, it had a circulation of 40,000 copies a week in 2006. Its headquarters is in Paris. 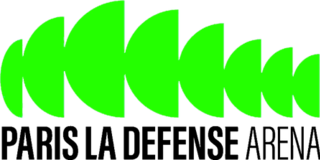 Paris La Défense Arena is a multi-use domed stadium in Nanterre, a western suburb of Paris. Opened in October 2017, it was developed by the rugby union club Racing 92, and replaced Stade Olympique Yves-du-Manoir as their home field. It is one of the two multi-use domed stadiums to be built in Europe, along with Telenor Arena and is Europe’s largest indoor arena. Its naming rights are held by Paris La Défense, the management company of the nearby La Défense business district.

François Asselineau is a French politician and an Inspector General for finances.

Nathalie Loiseau is a French politician, diplomat and academic administrator who has served as a Member of European Parliament since 2019. Previously she was director of the École nationale d'administration (ENA) from 2012 to 2017 and as the French Minister for European Affairs from 21 June 2017 to 27 March 2019. She was the top candidate of the La République En Marche electoral list in the 2019 European elections.

Geoffroy Lejeune is a French journalist. He is the editor-in-chief of Valeurs actuelles, a French conservative political magazine. 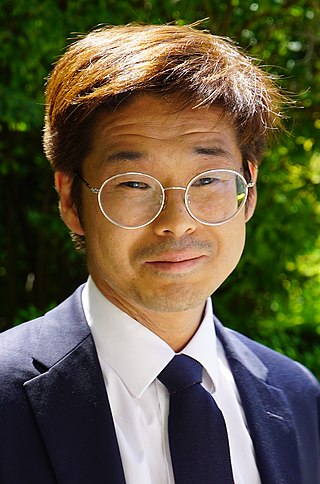 Joachim Jean-Marie Forget, known as Joachim Son-Forget is a South Korean-born French politician. Holding a doctorate in neuroscience, he also works part-time as a radiologist in Switzerland. He has held Kosovar citizenship since 2018. 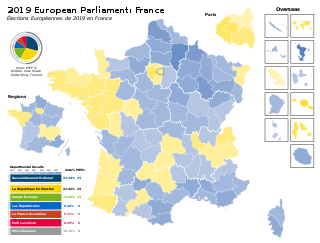 The 2019 European Parliament election in France were held on 26 May 2019, electing members of the 9th French delegation to the European Parliament as part of the elections held across the European Union. The election featured two major changes since the 2014 election: the return to a single national constituency and the increase in the number of French seats from 74 to 79 upon the withdrawal of the United Kingdom from the European Union. Officially, 79 MEPs were considered to have been elected, including five "virtual" MEPs who did not take their seats until the UK formally left the EU. The election featured 34 separate electoral lists, a record number at the national level.

Linternaute.com is a major French news site, launched in 2000. As of November 2020, it was the 99th most visited website in France.

Groupe Figaro is a French media conglomerate owned by Dassault Group. The company contains some of the core assets of the now extinguished Socpresse that Dassault purchased in 2006. Dassault renamed its press holdings as "Groupe Figaro" in 2011. 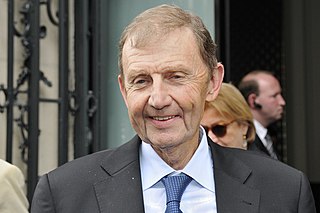 Étienne Mougeotte was a French journalist and media director. During his fifty-year career, he served as Vice-President of TF1 Group and was satellite director of TF1 from 1987 to 2007 alongside Patrick Le Lay. He directed the editorial staff at Le Figaro from 2008 to 2012 and was Director-General of Radio Classique from 2012 to 2018. From 2015 to 2020, he was President of Groupe Valmonde, including the magazine Valeurs actuelles.

Reconquête, styled as Reconquête! (R!), is a nationalist political party in France founded in late 2021 by Éric Zemmour, who has since served as its leader. He was a far-right candidate in the 2022 presidential election, in which he placed fourth with just over 7% of the vote as the best newcomer. 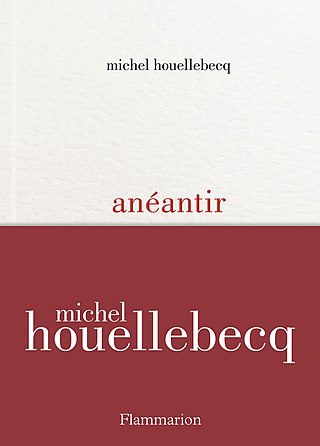 Anéantir is a novel by Michel Houellebecq, published on 7 January 2022 by Éditions Flammarion. The novel's first print run was 300,000 copies.

Philippe Vallancien, known professionally as Calvi, was a French cartoonist, caricaturist, and illustrator.

Wikimedia Commons has media related to Le Figaro .
This page is based on this Wikipedia article
Text is available under the CC BY-SA 4.0 license; additional terms may apply.
Images, videos and audio are available under their respective licenses.