Last updated January 27, 2023
Monthly newspaper in France
Not to be confused with the daily newspaper Le Monde.

The publication is owned by Le Monde diplomatique SA, a subsidiary company of Le Monde which grants it complete editorial autonomy. Worldwide there were 71 editions in 26 other languages (including 38 in print for a total of about 2.2 million copies and 33 electronic editions). [7]

Le Monde diplomatique was founded in 1954 by Hubert Beuve-Méry, founder and director of Le Monde , the French newspaper of record. Subtitled the "organ of diplomatic circles and of large international organisations, [8] " 5,000 copies were distributed, comprising eight pages, dedicated to foreign policy and geopolitics. Its first editor in chief, François Honti, developed the newspaper as a scholarly reference journal. Honti attentively followed the birth of the Non-Aligned Movement, created out of the 1955 Bandung Conference, and the issues of the "Third World".

Claude Julien became the newspaper's second editor in January 1973. At that time, the circulation of Le Monde diplomatique had jumped from 5,000 to 50,000 copies, and would reach, with Micheline Paulet, 120,000 in under 20 years. [9] Without renouncing its "Third-worldism" position, it extended the treatment of its subjects, concentrating on international economic and monetary problems, strategic relations, the Middle-East conflict, etc. One of the contributors was Samir Frangieh, a leftist Lebanese journalist. [10]

Le Monde diplomatique took an independent stance, criticising both the neoliberal ideology of the left and conservative policies represented by UK Prime Minister Margaret Thatcher and US President Ronald Reagan in the 1980s.[ citation needed ]

After the November 1989 Fall of the Berlin Wall following the dissolution of the Soviet Union, and the 1990-1991 Gulf War, the newspaper began to criticise what it described as an "American crusade". [9] Ignacio Ramonet was elected director or editor-in-chief in January 1991, serving until 2008.

Under his leadership, Le Monde diplomatique analysed the post-Cold War world, paying specific attention to "ethnic" conflicts that arose in this period: the wars in former Yugoslavia, the 1994 Rwandan genocide, the conflicts in the Caucasus, etc., as well as to the new information technology.

Ramonet has also published books about the media and their relationship to national societies. As noted by François Cusset, French universities have not developed an interdisciplinary approach to media studies. He notes that leftist journals including Le Monde Diplomatique have had an editorial approach that is committed to "critique of dominant media", both in terms of their roles in setting agendas and in enjoying status perks. [11] Both Ramonet and his successor, Serge Halimi, published books that critiqued the media from outside academic circles. [12]

The newspaper established financial and editorial independence from Le Monde in 1996, forming its own company. Le Monde owns 51%; the Friends of Le Monde diplomatique and Gunter Holzmann Association, comprising the paper’s staff, together own 49%. [13]

In an editorial in January 1995, Ignacio Ramonet coined the term "pensée unique" ("single thought") to describe the supremacy of the neoliberal ideology. [14] The newspaper supported the November–December 1995 general strike in France against Prime minister Alain Juppé's (RPR) plan to cut pensions.

Three years later, after a proposal in a 1997 editorial by Ramonet, Le Monde diplomatique took a founding role in the creation of ATTAC, an alter-globalisation NGO. It was founded to advocate the Tobin tax, and chapters have been started throughout the world. It now supports a variety of left-wing causes. The newspaper also took an important role in the organisation of the 2001 Porto Alegre World Social Forum.

After the Second Gulf War, started in 2003 under the George W. Bush administration, Le Monde diplomatique continued to criticise the US policy of "violent intervention" in the Middle East and the neoconservative project to "reshape" the so-called "Greater Middle East" region.[ citation needed ]

Ramonet devoted considerable space to reporting on Hugo Chávez, with whom he was said to have developed a close relationship, and his Bolivarian Revolution. [15] [16]

Ramonet was succeeded by Serge Halimi who had a PhD in Political Science from the University of California Berkeley. [12] In 2018, LMD publishes a total of 37 print and online editions, in a total of 20 languages. [13]

The August 2017 issue of the monthly was not marketed in Algeria. According to sources close to the distributor, the newspaper did not get permission to do so. Algerian authorities gave no explanation. The heads of the newspaper claim that it was "banned" from sale in the country because of a report by journalist Pierre Daum. He is best known for writing a book about the harkis who stayed in Algeria after Independence, and about the difficult social and economic situation of some young Algerians. [17]

André Fontaine, the director of Le Monde, signed a 1989 convention with Claude Julien which guaranteed the monthly's autonomy. But it gained complete statutory, economic and financial independence in 1996 with the creation of Le Monde diplomatique SA. With a donation from Günter Holzmann, a German antifascist exiled before World War II to Bolivia, the monthly's employees acquired approximately one-quarter of the capital, while Les Amis du Monde diplomatique, a 1901 Law association of readers, bought another quarter.

Thus, since the end of 2000, the newspaper's employees and readers retain 49% of Le Monde diplomatique SA's capital, largely above the control stock [18] necessary to control the direction and editorial line of the Monde diplo. The remaining 51% is owned by Le Monde. [9]

The Norwegian version of the July 2006 Le Monde diplomatique sparked interest when the editors ran, on their own initiative, a three page main story on the September 11, 2001 attacks and summarised the various types of 9/11 conspiracy theories (which were not specifically endorsed by the newspaper, only reviewed). [20]

In December 2006, the French version published an article by Alexander Cockburn, co-editor of CounterPunch , which strongly criticised the endorsement of conspiracy theories by the US left-wing, alleging that it was a sign of "theoretical emptiness." [21] The Norwegian Le Monde diplomatique, did again however mark its difference from the mother edition by allowing David Ray Griffin's response to Cockburn to be published in their March 2007 issue. [22]

Although Le Monde diplomatique publishes few advertisements in order to retain its editorial independence, it has sometimes been criticised for the quantity and nature of the published advertisements [23] In November and December 2003, two-page advertisements by IBM and a car manufacturer were placed. The issues of February and March 2004 contained advertisements by Microsoft in a "social" atmosphere with a picture of children, which led to agitation. [24]

Le Monde diplomatique co-publishes the Meat Atlas , which is an annual report on meat production and consumption. [25]

The Friends of Le Monde diplomatique are a London-based society that promotes the English edition. It organises regular talks at The Gallery in Cowcross Street, Farringdon. 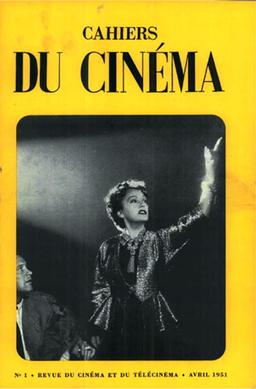 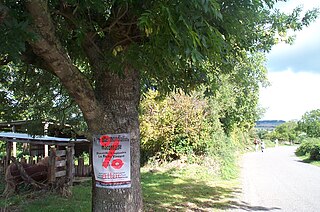 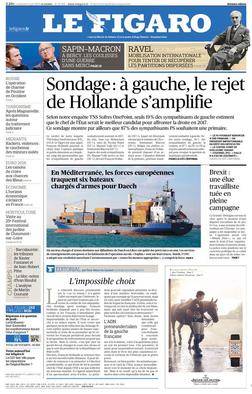 Le Figaro is a French daily morning newspaper founded in 1826. It is headquartered on Boulevard Haussmann in the 9th arrondissement of Paris. The oldest national newspaper in France, Le Figaro is one of three French newspapers of record, along with Le Monde and Libération.

Libération, popularly known as Libé, is a daily newspaper in France, founded in Paris by Jean-Paul Sartre and Serge July in 1973 in the wake of the protest movements of May 1968. Initially positioned on the far-left of France's political spectrum, the editorial line evolved towards a more centre-left stance at the end of the 1970s, where it remains as of 2012.

Ignacio Ramonet Miguez is a Spanish academic, journalist and writer who has been based in Paris for much of his career. After becoming first known for writing on film and media, he became editor-in-chief of Le Monde diplomatique, serving from 1991 until March 2008. Under his leadership, LMD established editorial independence in 1996 from Le Monde, with which it had been affiliated since 1954.

Serge Latouche is a French emeritus professor of economics at the University of Paris-Sud. He holds a degree in political sciences, philosophy and economy. 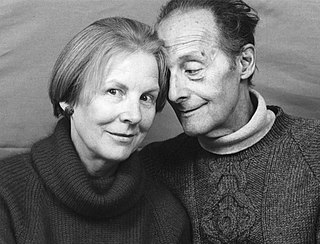 André GorzFrench: [ɑ̃dʁe ɡɔʁts], more commonly known by his pen names Gérard Horst[ʒeʁaʁ ɔʁst] and Michel Bosquet[miʃɛl bɔskɛ], was an Austrian and French social philosopher and journalist and critic of work. He co-founded Le Nouvel Observateur weekly in 1964. A supporter of Jean-Paul Sartre's existentialist version of Marxism after the Second World War, he became in the aftermath of the May '68 student riots more concerned with political ecology.

Les Temps Modernes is a French journal, founded by Simone de Beauvoir, Jean-Paul Sartre, and Maurice Merleau-Ponty. It first issue was published in October 1945. It was named after the 1936 film by Charlie Chaplin.

Daniel Schneidermann is a French journalist who focuses on the analysis of televised media. He is mainly active in weekly columns—in the past in Le Monde and presently in Libération and on a video channel: Arrêt sur images (Freeze-frame), formerly broadcast by the public TV channel France 5, but currently financed by subscription. The television show was canceled in 2007 by France 5 direction, an incident that led to the creation of the Arret Sur Images web site.

Claude Julien was a French journalist. He joins the foreign department of French newspaper of record Le Monde in 1951. In 1973, he became editor-in-chief then director of Le Monde diplomatique.

Serge Halimi is a French journalist working at Le Monde diplomatique since 1992. In March 2008 he became the editorial director. He is also the author of Le Grand Bond en Arrière.

Rebelión is a nonprofit news site, started in Spain at the end of 1996 by a group of journalists. It contains scientific and opinion articles covering topics such as current affairs, free knowledge, culture, ecology, economics, and resistance to globalization. Texts by and translations to Spanish of authors like Heinz Dieterich, Noam Chomsky, Marta Harnecker, Eduardo Galeano, José Saramago, Gabriel García Márquez, Julio Anguita, Vicenç Navarro and Ralph Nader have been included in Rebelión.

Maja Solar is a Serbian poetress and Marxist-feminist philosopher.

La Vigie Marocaine (1908–1971) was a francophone daily newspaper published by colons in Casablanca, Morocco. It became one of the most important French publications in the period of the French Protectorate.

Sahara Occidental indépendance ou génocide?, is a 1976 Western Saharan documentary film co-directed by Bruno Muel, Théo Robichet, and Miguel Ibarrondo. The film is produced by Théo Robichet for Unicité. The film explains the struggle of the Saharawi people and Polisario Front for the independence of Western Sahara and the guerrilla war against the Moroccans.

Wikimedia Commons has media related to Le Monde diplomatique .
This page is based on this Wikipedia article
Text is available under the CC BY-SA 4.0 license; additional terms may apply.
Images, videos and audio are available under their respective licenses.