Last updated June 14, 2021
Organization that exists to promote an academic discipline or profession

A learned society ( /ˈlɜːrnɪd/ ; also known as a learned academy, scholarly society, or academic association) is an organization that exists to promote an academic discipline, profession, or a group of related disciplines such as the arts and science. [1] Membership may be open to all, may require possession of some qualification, or may be an honour conferred by election. [2]

Most learned societies are non-profit organizations, and many are professional associations. Their activities typically include holding regular conferences for the presentation and discussion of new research results and publishing or sponsoring academic journals in their discipline. Some also act as professional bodies, regulating the activities of their members in the public interest or the collective interest of the membership.

Scholars in the sociology of science [ who? ] argue that learned societies are of key importance and their formation assists in the emergence and development of new disciplines or professions. [8]

Most are either specific to a particular country (e.g. the Entomological Society of Israel), though they generally include some members from other countries as well, often with local branches, or are international, such as the International Federation of Library Associations and Institutions (IFLA) or the Regional Studies Association, in which case they often have national branches. But many are local, such as the Massachusetts Medical Society, the publishers of the internationally known New England Journal of Medicine .

Some learned societies (such as the Royal Society Te Apārangi) have been rechartered by legislation to form quasi-autonomous non-governmental organizations.

Membership may be open to all, may require possession of some qualification, or may be an honor conferred by election. [2]

Some societies offer membership to those who have an interest in a particular subject or discipline, provided they pay their membership fees. Older and more academic/professional societies may offer associateships and/or fellowships to fellows who are appropriately qualified by honoris causa , or by submission of a portfolio of work or an original thesis. A benefit of membership may be discounts on the subscription rates for the publications of the society. Many of these societies award post-nominal letters to their memberships.

Following the globalization and the development of information technology, certain scholarly societies—such as the Modern Language Association—have created virtual communities for their members. In addition to established academic associations, academic virtual communities have been so organized that, in some cases, they have become more important platforms for interaction and scientific collaborations among researchers and faculty than have traditional scholarly societies.[ citation needed ] Members of these online academic communities, grouped by areas of interests, use for their communication shared and dedicated listservs (for example JISCMail), social networking services (like Facebook, LinkedIn) and academic oriented social networks (like Mendeley, Academia.edu). [9] [10]

An academy is an institution of secondary or tertiary higher learning, research, or honorary membership. The name traces back to Plato's school of philosophy, founded approximately 385 BC at Akademia, a sanctuary of Athena, the goddess of wisdom and skill, north of Athens, Greece.

The Accademia dei Lincei is one of the oldest and most prestigious European scientific institutions, located at the Palazzo Corsini on the Via della Lungara in Rome, Italy.

The scientific community is a diverse network of interacting scientists. It includes many "sub-communities" working on particular scientific fields, and within particular institutions; interdisciplinary and cross-institutional activities are also significant. Objectivity is expected to be achieved by the scientific method. Peer review, through discussion and debate within journals and conferences, assists in this objectivity by maintaining the quality of research methodology and interpretation of results.

A national academy is an organizational body, usually operating with state financial support and approval, that co-ordinates scholarly research activities and standards for academic disciplines, most frequently in the sciences but also the humanities. Typically the country's learned societies in individual disciplines will liaise with or be co-ordinated by the national academy. National academies play an important organizational role in academic exchanges and collaborations between countries. 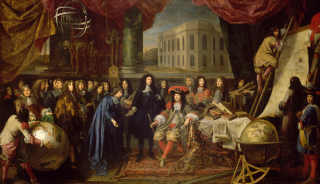 The German National Academy of Natural Sciences Leopoldina, short Leopoldina, is the national academy of Germany, and is located in Halle (Saale). Founded on January 1, 1652, based on academic models in Italy, it was originally named the Academia Naturae Curiosorum until 1687 when Emperor Leopold I raised it to an academy and named it after himself. It was since known under the German name Deutsche Akademie der Naturforscher Leopoldina until 2007, when it was declared to be Germany's National Academy of Sciences. The Leopoldina has a claim to be the oldest continuously existing learned society in the world. The validity of the claim depends in part on how certain definitional and historical questions are answered.

The Accademia del Cimento, an early scientific society, was founded in Florence in 1657 by students of Galileo, Giovanni Alfonso Borelli and Vincenzo Viviani and ceased to exist about a decade later. The foundation of Academy was funded by Prince Leopoldo and Grand Duke Ferdinando II de' Medici. The tenets of the society included:

An academy is an institution of secondary education or higher learning, research, or honorary membership.

Federico Angelo Cesi was an Italian scientist, naturalist, and founder of the Accademia dei Lincei. On his father's death in 1630, he became briefly lord of Acquasparta. 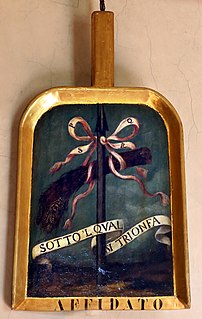 Filippo Vincenzo Romolo Salviati was an Italian nobleman, scientist and friend of Galileo. He is remembered today mainly because he appears as one of the figures in Galileo's controversial work the Dialogue Concerning the Two Chief World Systems (1632). 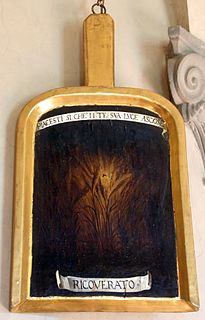 Mario Guiducci was an Italian scholar and writer. A friend and colleague of Galileo, he collaborated with him on the Discourse on Comets in 1618. 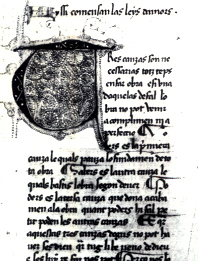 The Consistori del Gay Saber was a poetic academy founded at Toulouse in 1323 to revive and perpetuate the lyric poetry of the troubadours.

All European Academies (ALLEA) is the European Federation of Academies of Sciences and Humanities. It was founded in 1994 and brings together more than 50 Academies of Sciences and Learned Societies from over 40 member countries of the Council of Europe. Since May 2018 the President of ALLEA is Antonio Loprieno. ALLEA is financed by annual dues from its member academies and remains fully independent from political, religious, commercial or ideological interests. The ALLEA secretariat is based on the premises of the Berlin-Brandenburg Academy of Sciences and Humanities in Berlin. 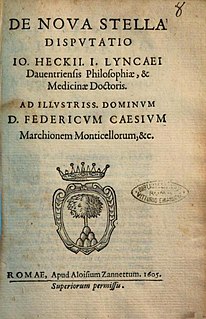 Johannes van Heeck,, was a Dutch physician, naturalist, alchemist and astrologer. Together with Prince Federico Cesi, Anastasio de Filiis and Francesco Stelluti, he was one of the four founding members of the Accademia dei Lincei, the first learned society dedicated to understanding of the natural world through scientific enquiry.