Ledenika (Bulgarian : Леденика, English: icy or glacial [1] ) is a cave in the Northwestern parts of the Balkan Mountains, 16 km away from the Bulgarian city of Vratsa. [2] Its entrance is approximately 830 m above sea level. The cave features an abundance of galleries and impressive karst formations including stalactites and stalagmites. [1] It was first discovered around the beginning of the 20th century and has been open to tourists since 1961. [1] Ledenika Peak on Graham Land in Antarctica is named after the cave, in recognition of its cultural importance. [3]

The largest gallery is known as the Great Temple, with a ceiling of 15 m (50 ft). [1] The Concert Hall is smaller, but has an enormous variation of stalactites and stalagmites. During the winter, icicles may form on the ceiling. The abundance of icicles in winter is thought to have led to the cave's name, which in English translates to icy or glacial. [1]

The limestone formations in the cave have been dated back to the Pliocene era. [4]

The Bulgarian Tourist Union has included Ledenika in their 100 Tourist Sites of Bulgaria, a promotional effort aimed at highlighting the nation's best tourist spots. The cave has been one of the country's most noted caves since it was opened to tourists. In the late 1980s, there were a record 100,000 visitors annually. [2]

A stalagmite is a type of rock formation that rises from the floor of a cave due to the accumulation of material deposited on the floor from ceiling drippings. Stalagmites are typically composed of calcium carbonate, but may consist of lava, mud, peat, pitch, sand, sinter and amberat. 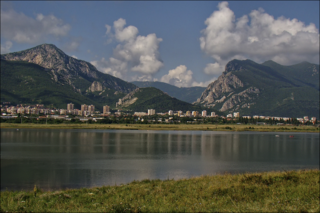 Vratsa is the largest city in northwestern Bulgaria. Administrative and economic center of the municipality of Vratsa and Vratsa district. It is located about 112 km north of Sofia, 40 km southeast of Montana.

Cave of the Winds is a cave in the Pikes Peak region of Colorado. It is located just west of Colorado Springs on U.S. Highway 24, near the Manitou Cliff Dwellings. Tours of the complex of caves are given daily. 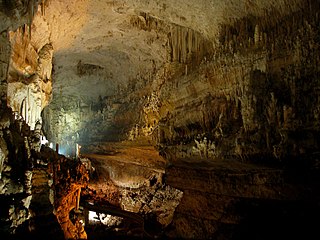 The Jeita Grotto is a system of two separate, but interconnected, karstic limestone caves spanning an overall length of nearly 9 kilometres (5.6 mi). The caves are situated in the Nahr al-Kalb valley within the locality of Jeita, 18 kilometres (11 mi) north of the Lebanese capital Beirut. Though inhabited in prehistoric times, the lower cave was not rediscovered until 1836 by Reverend William Thomson; it can only be visited by boat since it channels an underground river that provides fresh drinking water to more than a million Lebanese. 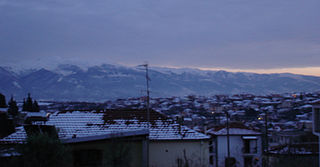 Alistrati is a small town in Serres, situated at the borders of the regional unit of Drama and regional unit of Serres, in the Macedonia region of Greece. It has approximately 3,000 inhabitants, a town hall and a visitable cave. It is 20 km away from Drama and 45 km away from Serres. It is a listed traditional settlement and archaeologists had found something there. Since 2010 lAlistrati is part of the municipality New Zichni, of which it is a municipal unit. Alistrati town has a population of 2,127 (2011) while the municipal unit has an area of 129.878 km2 and a population of 3,088 (2011). Alistrati was built like an amphitheatrical inside a fascinating mountain groups on hills of the mountain range Menikio on an altitude of 325m. In Alistrati there exists rising and sloping streets. Sea-winds blowing from Thassos and Staymonikon Bay influence Alistrati day by day. Alistrati, a traditional community one of the biggest of the area Zichni-Fillida. It's been up-graded to municipality of Alistrati with the "Kapodistrias" law and included the villages :Agioxori, Skopia, Mandili, Lefkothea and R.S of Aggista. 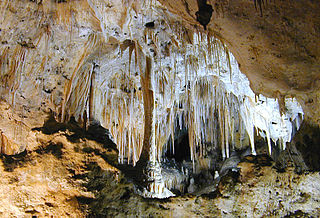 Carlsbad Caverns National Park is an American national park in the Guadalupe Mountains of southeastern New Mexico. The primary attraction of the park is the show cave, Carlsbad Cavern. Visitors to the cave can hike in on their own via the natural entrance or take an elevator from the visitor center. 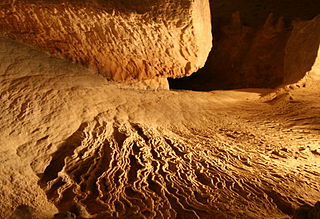 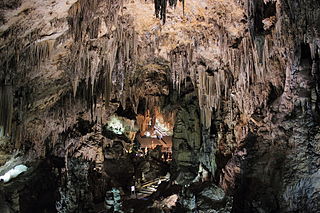 The Caves of Nerja are a series of caverns close to the town of Nerja in the Province of Málaga, Spain. Stretching for almost 5 kilometres (3.1 mi), the caverns are one of Spain's major tourist attractions. Concerts are regularly held in one of the chambers, which forms a natural amphitheatre. 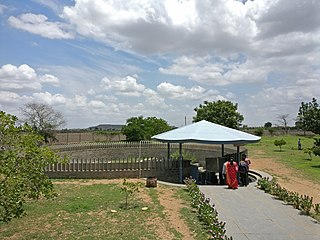 The Belum Caves is the largest and longest cave system open to the public on the Indian subcontinent, known for its speleothems, such as stalactite and stalagmite formations. The Belum Caves have long passages, galleries, spacious caverns with fresh water and siphons. This cave system was formed over the course of tens of thousands of years by the constant flow of underground water from the now-disappeared river Chitravathi. The cave system reaches its deepest point at the point known as Pataalaganga. In Telugu language, it is called Belum Guhalu. Belum Caves have a length of 3,229 m (10,593.8 ft), making them the second largest caves on the Indian Subcontinent after the Krem Liat Prah caves in Meghalaya. It is one of the centrally protected Monuments of National Importance. 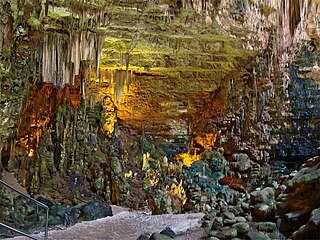 The Castellana Caves are a karst cave system located in the municipality of Castellana Grotte, in the Metropolitan City of Bari, Apulia, southern Italy.

El Soplao is a cave located in the municipalities of Rionansa, Valdáliga and Herrerías in Cantabria, Spain. It is considered unique for the quality and quantity of geological formations (speleothems) in its 17 miles length, 6 of which are open to the public. In it are formations such as helíctites and curtains. Its formation dates back to the Mesozoic, in particular the Cretaceous period 240 million years ago. The entrance is at 540 metres in the Sierra Soplao Arnero.

Gökgöl Cave is a show cave in Zonguldak Province, Turkey. It is the fifth biggest cave of the country. It is close to a main highway and is well-decorated with stalactites and stalagmites and attracts many visitors.

Gruta de Maquiné (MG-0243), also Lapa Nova de Maquiné, is the oldest and one of the most commercially visited caves in Brazil. It is located about 5 km (3.1 mi) from Cordisburgo and 143 km (88.9 mi) northwest of Belo Horizonte, in the State of Minas Gerais. The cave has seven huge chambers explored, amounting to 650 m (2,130 ft) (linear) and unevenness of the ground of only 18 m (59 ft). Safety measures like lighting, walkways and handrails allow a multitude of visitors to enjoy safely the wonders of the grotto where the whole journey is accompanied by an experienced local guide.

The Dupnisa Cave, aka Dupnisa Caves, is a show cave located in Kırklareli Province, northwestern Turkey, close to Bulgarian-Turkish border. The cave itself, unlike what the original name suggests, is actually three, interconnected caves divided into two separate floors. Its name is derived from the Bulgarian word Dupnitsa (Дупница), related to the word for "hole".

Lipa Cave is a karst cave situated close to Cetinje in the mountains of Montenegro. It has a system of about 2.5 kilometres (1.6 mi) of passages and halls, which makes it one of the largest caves in Montenegro. It's the first cave in Montenegro which is opened for tourists, after the project of cave's valorisation, on which worked Municipality of Cetinje and 'Lipa Cave' company.

The Eberstadt Stalactite Cave is a German show cave located in Bauland at the transition of Southeastern Odenwald forest in the North of Baden-Württemberg. It is near Eberstadt, a District of Buchen, around 70 kilometres (43 mi) east of Heidelberg and 100 km (62 mi) north of Stuttgart. The cave is around 600 metres (1,969 ft) long, lies 341 m (1,119 ft) above sea level and is estimated to be 3 to 5 million years old. It was discovered in December 1971 after blasting operations in a Muschelkalk quarry, and opened to the public in 1973. Since then it has been used as a show cave and is one of the attractions of the "Geo-Nature park Bergstrasse-Odenwald".