Born and raised in Santa Monica, California, Grosscup was a quarterback for the University of Washington in Seattle in 1955. He and three former high school teammates left the school shortly after their freshman season; deciding to sit out a year instead of continuing to play for the "tyrannical" John Cherberg in Seattle. [3] He attended Santa Monica College, [4] then transferred to the University of Utah in Salt Lake City in 1957, leading a passing offense under head coach Jack Curtice that was advanced for its time. [5] Monday Night Football broadcaster Al Michaels credits Grosscup for developing the shovel pass or "Utah pass," although Grosscup acknowledges that the play was used decades earlier in the 1920s. [6]

Grosscup finished his junior season in 1957 completing 94 of 137 passes (68.6%) for 1,398 yards and 10 touchdowns. He was named a first-team All-American by Look , the Newspaper Enterprise Association, the Williamson National Football Rating, and Today and finished tenth in the balloting for the Heisman Trophy, won by John David Crow of Texas A&M. [7]

A shoulder injury hampered his senior season under first-year head coach Ray Nagel in 1958, but Grosscup was selected to play in the Senior Bowl in early 1959. [8]

Selected by the New York Giants with the tenth overall pick in the 1959 NFL Draft, Grosscup appeared in eight games in his three seasons with the Giants. [9] The Giants were the Eastern champions in 1959 and 1961, but fell in both title games on the road. In August 1962, his contract was purchased by the second-year Minnesota Vikings, [10] but he was cut before the beginning of the season. This allowed Grosscup to return to New York in September, this time with the New York Titans of the American Football League, [11] in its third season. He began the season as the starter, but missed six weeks with a knee injury. Grosscup was cut on the final day of the 1963 preseason and signed with the Saskatchewan Roughriders of the Canadian Football League three days later. [12] That same year, Grosscup released his first book, entitled Fourth and One. [13]

After failing to make the San Francisco 49ers, Grossup spent the 1964 season on the Oakland Raiders' taxi squad. [13] He was cut by the Raiders the following season and signed with the Hartford Charter Oaks of the newly formed Continental Football League. [14]

After the 1966 season, Grosscup began a career in broadcasting. He spent one season calling AFL games for NBC before beginning a twenty-year stint as a college football analyst for ABC, working alongside notable voices such as Bill Flemming, Chris Schenkel, Keith Jackson, Verne Lundquist and Al Michaels.

Grosscup was also a broadcaster in the USFL, first as a radio analyst for the Oakland Invaders, then as a television analyst on ABC from 1984–1985.

Grosscup was the radio analyst for the Sacramento Gold Miners of the CFL during the 1993 and 1994 seasons.

Grosscup was a voter in the Harris Interactive College Football Poll. [15]

Grosscup was a member of the California Golden Bears broadcast team for 32 years, including 17 years as a color analyst and 15 years as part of the team's postgame coverage. [16]

From 1986 to 2003, Grosscup was the radio analyst for broadcasts alongside Joe Starkey. [16] Former Cal quarterback Mike Pawlawski took over as radio analyst in 2004 despite Grosscup's willingness to continue until 2007. [17] Grosscup hosted the postgame radio show for Cal football games from 2004 until his retirement in 2018. [16]

The San Francisco Demons was a short-lived springtime American football team based in San Francisco, California. This team was part of the failed XFL begun by Vince McMahon of World Wrestling Entertainment and by NBC, a major television network in the United States. Originally they were to be based in San Jose but prior to the start of the season they were moved to San Francisco. They were in the Western Division with the Los Angeles Xtreme, Las Vegas Outlaws and Memphis Maniax. 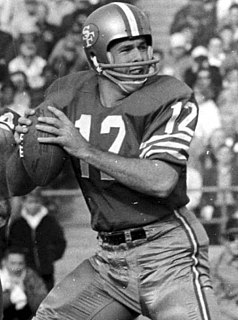 John Riley Brodie is a former American football player, a quarterback for the San Francisco 49ers of the National Football League (NFL) for 17 seasons. He had a second career as a Senior PGA Tour professional golfer, and was a television broadcaster for both sports.

James Donald Miller is a host on SiriusXM NFL Radio, and a former NFL quarterback (1994–2005), best known for his years with the Chicago Bears (1998–2002). Following his professional football career, Miller has worked as a football analyst on radio and television.

Joe Starkey is an American sportscaster who has served as the radio play-by-play announcer of California Golden Bears football since 1975. He previously worked as the sports director of KGO radio in San Francisco, California and play-by-play announcer for the San Francisco 49ers for 20 seasons from 1989 to 2008. Starkey is most famous for his frenetic call of The Play in the 1982 Big Game between Cal and Stanford: "Oh, the band is out on the field!" Starkey nearly lost his voice during and after this event, which he hailed as "the most amazing, sensational, dramatic, heartrending, exciting, thrilling finish in the history of college football!" 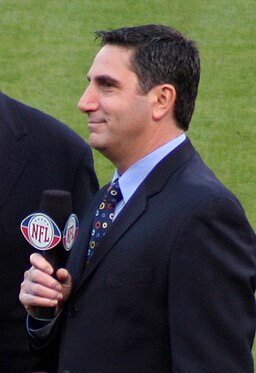 Robert L. "Bob" Papa is an American sportscaster. Papa is employed by Golf Channel, announces various Olympic sports for NBC Sports, and is known as "the voice" of the New York Giants. 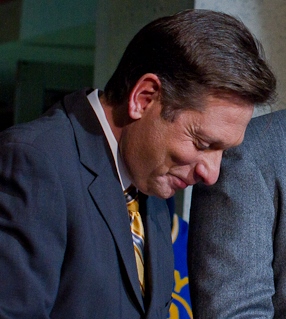 Tamerlane Lincoln Kennedy is an American former professional football player who was an offensive tackle in the National Football League (NFL) for eleven seasons. He played college football at Washington, and was recognized as a consensus All-American.

Donald Alan Heinrich was an American football player, coach, and announcer. He played professionally as a quarterback in National Football League (NFL) for the New York Giants and Dallas Cowboys, and in the American Football League (AFL) for the Oakland Raiders. Heinrich played college football at the University of Washington.

Troy Scott Taylor is a former professional football quarterback who played for the New York Jets from 1990 to 1991. He is currently the head coach for Sacramento State of the Big Sky Conference. Previously, he had served as co-head football coach at Folsom High School in Folsom, California, from 2012 to 2015; co-offensive coordinator at Eastern Washington University in 2016; and offensive coordinator at University of Utah from 2017 to 2018

AT&T SportsNet Rocky Mountain is an American regional sports network owned by WarnerMedia News & Sports, a division of AT&T's WarnerMedia, as part of the AT&T SportsNet brand of networks, and is an affiliate of Bally Sports. Headquartered in Denver, Colorado, the network broadcasts regional coverage of sports events throughout the Rocky Mountain region, mainly focusing on professional sports teams based in the Denver metropolitan area, Utah and Nevada.

The 1980 Washington Huskies football team was an American football team that represented the University of Washington during the 1980 NCAA Division I-A football season. In its sixth season under head coach Don James, the team compiled a 9–2 record in the regular season and were Pacific-10 Conference champions at 6–1. They returned to the Rose Bowl, but fell to favored Michigan; for the season Washington outscored its opponents 333 to 198.

The 1958 Utah Redskins football team represented the University of Utah during the 1958 NCAA University Division football season. Home games were played on campus in Salt Lake City at Ute Stadium.

The 1957 Utah Redskins football team represented the University of Utah during the 1957 NCAA University Division football season. Home games were played on campus in Salt Lake City at Ute Stadium.

The 2019 California Golden Bears football team represented the University of California, Berkeley in the 2019 NCAA Division I FBS football season. They competed as members of the North Division of the Pac-12 Conference. In their third year under head coach Justin Wilcox, the Bears improved to an 8–5 record for only the second time since 2009, finishing 2nd in the Pac-12 North.

In 1960, ABC returned to baseball broadcasting with a series of late-afternoon Saturday games. Jack Buck and Carl Erskine were the lead announcing crew for this series, which lasted one season. ABC typically did three games a week. Two of the games were always from the Eastern or Central Time Zone. The late games were usually San Francisco Giants or Los Angeles Dodgers' home games. However, the Milwaukee Braves used to start many of their Saturday home games late in the afternoon. So if the Giants and Dodgers were both the road at the same time, ABC still would be able to show a late game.