Lee was born in 1950 in Bibong-myeon  [ ko ],Cheongyang,South Chungcheong Province. After graduating from Sungkyunkwan University,Lee worked as a public officer in the Economic Planning Board (current Ministry of Strategy and Finance) and later moved to the National Police Agency. [1] From 1982 to 1984,he studied at Michigan State University in the United States and received an M. A. in Criminal Justice. [2] From 1986 to 1989,Lee served as Consul for the Consulate General of the Republic of Korea in Los Angeles. [2] [3]

In 1995,Lee entered into politics,joining the Democratic Liberal Party (later renamed as the New Korea Party). In the 1996 election,he was elected as a member of the National Assembly for the New Korea Party. In 1998,he joined the United Liberal Democrats,led by Kim Jong-pil. [1] In the 2006 election,he was elected as the governor of South Chungcheong Province. He resigned as governor on 23 December 2009,as a protest against the Lee Myung-bak government. [4]

Lee was diagnosed with multiple myeloma,a type of blood cancer. [4] After recovering,he was re-elected as a member of the National Assembly in a 2013 by-election. On May 2014,he became the floor leader of the ruling Saenuri Party. [1]

On 20 April 2015,Lee offered to resign as Prime Minister,amid allegations of bribery. [7] [8] He formally stepped down on 27 April 2015,apologizing over a scandal in which he was accused of taking an illegal cash gift from Sung Wan-jong,a businessman. [9] President Park Geun-hye accepted Lee's resignation. [9] 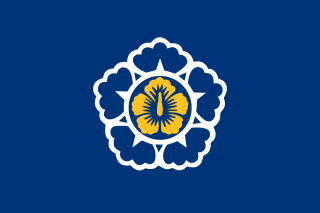 The prime minister of the Republic of Korea is the deputy head of government and the second highest political office of South Korea who is appointed by the president of the Republic of Korea,with the National Assembly's approval. The prime minister may be a member of the National Assembly,but this is not required to hold the office.

The National Intelligence Service is the chief intelligence agency of South Korea. The agency was officially established in 1961 as the Korean Central Intelligence Agency,during the rule of President Park Chung-hee's military Supreme Council for National Reconstruction,which displaced the Second Republic of Korea. The original duties of the KCIA were to supervise and coordinate both international and domestic intelligence activities and criminal investigation by all government intelligence agencies,including that of the military. The agency's broad powers allowed it to actively intervene in politics. Despite being involved in many controversies,it is regarded as one of the most elite intelligence agencies in Asia. Agents undergo years of training and checks before they are officially inducted and receive their first assignments.

Park Geun-hye is a former South Korean politician who served as President of South Korea from 2013 until 2017,when she was impeached and a year later convicted on related corruption charges. 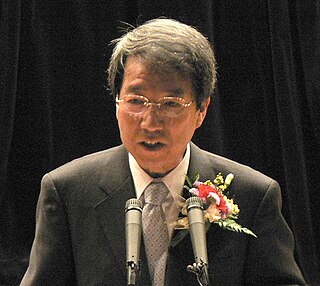 Nogeun-ri,also No Gun Ri,is a village in Hwanggan-myeon,Yeongdong County,North Chungcheong Province in central South Korea. The village was the closest named place to the site of the No Gun Ri Massacre during the Korean War,in which the U.S. military killed South Korean civilians fleeing their nearby villages. A South Korean government committee in 2005 certified the names of 163 dead and missing and 55 wounded,and said many other victims' names were never reported.

Lee Hong-Koo is a former Korean academic,politician,and think tank leader who served as a former Prime Minister of the Republic of Korea,former South Korean Ambassador to the United Kingdom and United States,and founding Chairman of the East Asia Institute in Seoul.

Presidential elections were held in South Korea on 19 December 2012. They were the sixth presidential elections since democratization and the establishment of the Sixth Republic,and were held under a first-past-the-post system,in which there was a single round of voting and the candidate receiving the highest number of votes was elected. Under the South Korean constitution,a president is restricted to a single five-year term in office. The term of the then incumbent president Lee Myung-bak ended on 24 February 2013. According to the Korea Times,30.7 million people voted with turnout at 75.8%. Park Geun-hye of the Saenuri party was elected the first female South Korean president with 51.6% of the vote opposed to 48.0% for her opponent Moon Jae-in. Park's share of the vote was the highest won by any candidate since the beginning of free and fair direct elections in 1987 and the first such election in which any candidate won a majority.

Early presidential elections were held in South Korea on 9 May 2017 following the impeachment and dismissal of Park Geun-hye. The elections were conducted in a single round,on a first-past-the-post basis,and had originally been scheduled for 20 December 2017. However,they were brought forward after the decision of the Constitutional Court on 10 March 2017 to uphold the National Assembly's impeachment of Park. Following procedures set out in the Constitution of South Korea,Prime Minister Hwang Kyo-ahn succeeded Park as the acting president. After Park was removed from office by the Constitutional Court's ruling,acting president Hwang announced he would not run for a term in his own right. 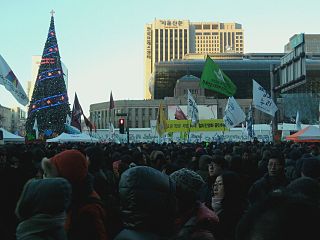 The 2012 NIS public opinion manipulation scandal saw members of the National Intelligence Service (NIS) of South Korea accused of interfering in the South Korean presidential election,2012. First,an agent of the National Intelligence Service (NIS) was alleged to have manipulated public opinion to help Park Geun-hye's presidential election under the command of the NIS. Second,the director of the agency commanded an NIS agent to manipulate public opinion. Suspicions were raised before the election,but were not verified until afterwards. 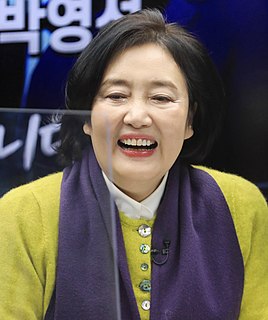 Park Young-sun is a South Korean journalist-turned politician previously served as the second Minister of SMEs and Startups under President Moon Jae-in from April 2019 to 2021 and the first woman to lead SME-specialised government entity since its creation in 1996. Park is also a four-term parliamentarian of Democratic Party.

Ahn Hee-jung,also known as An Hee-jung,is a former South Korean politician. He served as the 36th and 37th Governor of South Chungcheong Province. He stepped down from his role as governor and announced his retirement from public life after acknowledging accusations that he sexually assaulted his aide Kim Ji-eun on multiple occasions. In February 2019,he was sentenced to a three and a half year prison term for sexual assault. 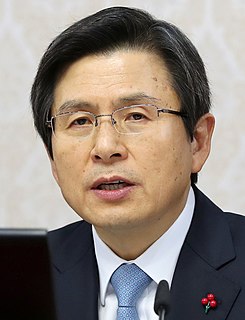 Chung Sye-kyun is a South Korean politician,former Speaker of the National Assembly,and the former Prime Minister of South Korea. 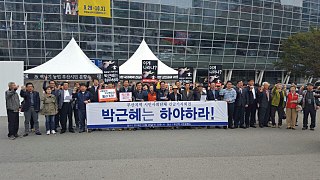 The 2016–2017 South Korean protests,also known as the Candlelight Vigil(Korean:촛불집회),were a series of protests against President Park Geun-hye that occurred throughout South Korea from November 2016 to March 2017. Protesters denounced the Park administration's 2016 political scandal and called for the resignation of Park Geun-hye.

The impeachment of Park Geun-hye,President of South Korea,was the culmination of a political scandal involving interventions to the presidency from her aide,Choi Soon-sil. The impeachment vote took place on 9 December 2016,with 234 members of the 300-member National Assembly voting in favour of the impeachment and temporary suspension of Park Geun-hye's presidential powers and duties. This exceeded the required two-thirds threshold in the National Assembly and,although the vote was by secret ballot,the results indicated that nearly half of the 128 lawmakers in Park's party Saenuri had supported her impeachment. Thus,Hwang Kyo-ahn,then Prime Minister of South Korea,became Acting President while the Constitutional Court of Korea was due to determine whether to accept the impeachment. The court upheld the impeachment in a unanimous 8–0 decision on 10 March 2017,removing Park from office. The regularly scheduled presidential election was advanced to 9 May 2017,and Moon Jae-in,former leader of the Democratic Party,was elected as Park's permanent successor.

Cho Yoon-sun is a South Korean lawyer,writer and politician. She formerly served as the South Korean Minister of Gender Equality and Family and later as its Minister of Culture,however she was later jailed after being convicted of abuse of power and coercion. 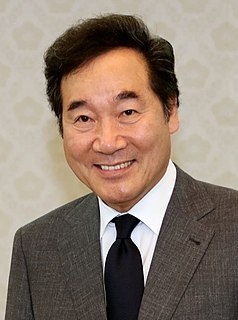 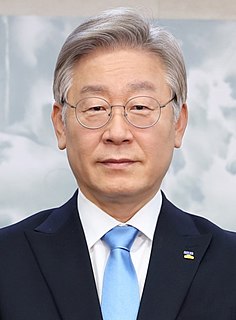 The 2021 South Korean by-elections were held in South Korea on 7 April 2021. The National Election Commission announced on 2 March 2021,that the by-elections would be held for 21 public offices or electoral districts,including 2 Metropolitan mayors,2 Municipal mayors,8 Metropolitan Council constituencies,and 9 Municipal Council constituencies. Candidate registration ran from 18 to 19 March,and the list of candidates was confirmed on 26 March.