The Legend of Nazaré has it that on the early morning of September 14, 1182, Dom Fuas Roupinho alcalde of Porto de Mós, Portugal, was out hunting in his domain, near the coast, when he saw a deer which he immediately began chasing. All of a sudden a heavy fog rose up from the sea. The deer ran towards the top of a cliff and Dom Fuas in the midst of the fog was cut off from his companions. When he realised he was on the edge of the cliff he recognised the place. He was next to a small grotto where a statue of Our Lady with the Enfant was venerated. Thus he prayed out loud Our Lady, Help Me. All of a sudden the horse miraculously stopped at the end of a rocky point suspended over the void, the Bico do Milagre (Point of the Miracle), thus saving the rider and his mount from a drop of more than 100 metres, a fall that would certainly have caused their death.

Dom Fuas dismounted and went down to the grotto to pray and give thanks for the miracle. Then he ordered his companions to fetch masons in order to build a small chapel over the grotto so that the miraculous image could be easily venerated by all and as a memorial to the miracle that saved him. Then before walling up the grotto the masons destroyed the existing altar where amongst the stones they found an ivory chest containing some reliques and an old parchment describing the story of the little wooden statue, one palm high, of Our Lady seated breastfeeding baby Jesus seated on her left leg.

According to the parchment the statue must have been venerated since the beginning of Christianity in Nazareth, in Palestine. It was rescued from the iconoclasts in the fifth century by the monk Ciriaco. It was he who brought it to Iberia, to the monastery of Cauliniana, near Mérida, where it remained until 711, the year of the battle of Guadalete, when the Christian forces were defeated by the Moorish invading army coming from north Africa.

When the news of the defeat arrived at Mérida, the friars of Cauliniana prepared to leave their monastery. Meanwhile, the defeated king, Roderic, who was able to flee the battlefield alone and disguised as a beggar anonymously asked for shelter at the monastery. When he asked one of the friars, Frei Romano, to hear him in Confession he had to tell who he really was. Then the friar suggested they flee together taking with them an old and holy image of Mary with the Enfant venerated at the monastery.

So the statue of Our Lady of Nazaré, which received its name from the village in Holy Land where it was first venerated, was brought by friar Romano and by king Roderic to the Atlantic coast. When they reached their destination they settled in an empty hermitage on the top of a rocky hill, the Monte de S. Bartolomeu, and there they stayed for a few days. They then decided to separate and live by themselves as hermits. The friar took the image and settled in a little grotto, on the edge of a cliff above the sea, next to the hill where the king went on living.

A year went by and Roderic decided to leave the region. Friar Romano stayed in his hermitage above the sea until he died. The holy statue, a black Madonna, stayed on the altar where he left it until 1182, when Dom Fuas, after the miracle, moved it to the chapel built over the grotto as a memorial to the event that saved his life. Thus the still existing chapel was named Capela da Memória (Chapel of the Memory). [1]

In 1377, because of the increased number of pilgrims, king Fernando had a church built near the chapel and transferred the statue there. At the end of the sixteenth century, this church experienced the first of a series of reconstructions and enlargements. The existing building is now the result of several interventions from the sixteenth to the nineteenth centuries that give it a very unusual character. This church or sanctuary is named Santuário de Nossa Senhora da Nazaré (Sanctuary of Our Lady of Nazaré). [1] The holy image is now on display in the main chapel in a small niche above the altar that can be accessed by a staircase leading from the sacristy. Since 711, the statue has remained in the village named after it: Sítio da Nazaré (Place of the Nazaré). In this village, nowadays a quarter of the town of Nazaré, one can still visit the three sanctuaries mentioned above: the underground hermitage, the small chapel above it, and the church where one can visit Our Lady of Nazaré.

According to oral tradition, the holy icon was sculpted by St. Joseph the carpenter, in Nazareth, when Jesus was still a baby. A few decades latter St. Luke the evangelist painted it. So, it may well be the most ancient image venerated by Christians.

Praia da Vitória is a municipality in the Portuguese archipelago of the Azores. With a population of 21,035, the second largest administrative authority on the island of Terceira, it covers an area of 161.27 square kilometres (62.27 sq mi), that extends from the northern coast halfway into the interior.

Vila do Porto is the single municipality, the name of the main town and one of the civil parishes on the island of Santa Maria, in the Portuguese archipelago of Azores. Its nearest neighbor, administratively, is the municipality of Povoação on the southern coast of São Miguel, and it is physically southwest of the islets of the Formigas. The population in 2011 was 5,552, in an area of 96.89 km².

Nazaré is a municipality in Oeste region and Leiria District, in historical Estremadura province of Portugal. 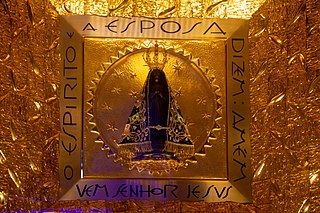 The Church of Nossa Senhora da Conceição is a church in the civil parish of Madalena, in the municipality of Lisbon.

The Sanctuary of Our Lady of Nazaré is an imposing Marian shrine that memorializes an ancient miracle occurred under the intercession of the Virgin Mary. It is located on the hilltop called O Sítio, overlooking Nazaré, in Portugal, and was founded in the 14th century. 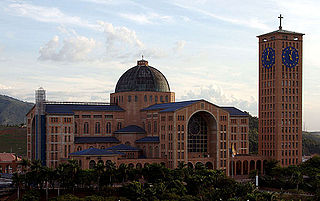 The Cathedral Basilica of the National Shrine of Our Lady Aparecida is a prominent Roman Rite Catholic basilica in Aparecida, Brazil. It is dedicated to Our Lady of Aparecida, Fishermen found a statue of the Blessed Virgin Mary) as the principal Patroness of Brazil. Nossa Senhora da Conceição Aparecida roughly translates to Our Lady of Conception Who Appeared. It is the second largest church in the world in total interior area, after St. Peter's Basilica in Vatican City. 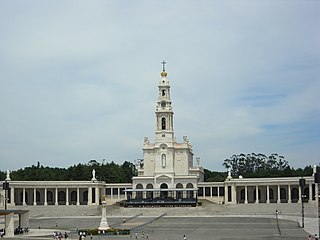 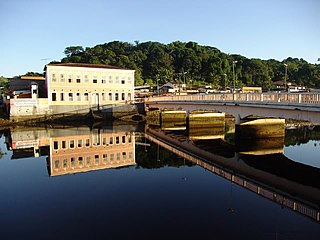 Nazaré, also known as Nazaré das Farinhas, is a municipality in the state of Bahia in the North-East region of Brazil. The municipality has a population of 29,546 with a population density of 107 inhabitants per square kilometer. It is located 110 km (68 mi) from the state capital of Bahia, Salvador. Nazaré is within the Bahian Recôncavo, an interior region of the state of Bahia. It borders the municipalities of Muniz Ferreira, Aratuípe, Jaguaripe, São Felipe, and Maragogipe. The Jaguaripe River crosses through the middle of the town. It is sits on the intersection of two Bahian state highways, BA-001 and BA-046..

The Nazaré Funicular is a funicular situated in the civil parish of Nazaré, Portugal, municipality of Nazaré, in the Portuguese district of Leiria.

The Hermitage of Nossa Senhora dos Anjos, is a hermitage/chapel located in the village of Anjos, on the northcoast of the civil parish of Vila do Porto, on the island of Santa Maria in the Portuguese Azores.

The Convent of Caloura is a Portuguese 16th-century convent located in the civil parish of Água de Pau, in the municipality of Lagoa, on the island of São Miguel in the archipelago of the Azores.

The statue of Our Lady of Miracles, Jaffna patão is a wooden statue, now preserved in the church of São Pedro, in Bainguinim, Goa, India.

The Abbey of Our Lady of Montserrat, more commonly known as the Mosteiro de São Bento (Monastery of St. Benedict), is a Benedictine abbey located on the Morro de São Bento in downtown Rio de Janeiro, Brazil. The Mannerist style church is a primary example of Portuguese colonial architecture in Rio and the country.

Real Colégio de Educação de Chorão was a Catholic seminary founded on 2 April 1761 on Chorão Island. It belonged of the Parish of Our Lady of Grace Church 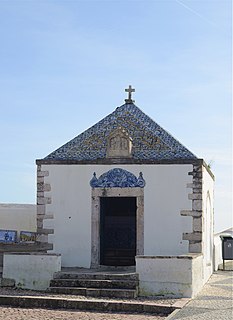 Memory Hermitage, also known as the Chapel of Our Lady of Nazaré, is located on the edge of promontory in Nazaré, Portugal. It is a four-sided chapel decorated with blue and white tiles and has a pyramidal roof.

The Church of Our Lady of Nazareth of Engenho Itaperoá is an abandoned 18th-century Roman Catholic church in São Cristóvão, Sergipe, Brazil. It is also referred to as the Chapel of Our Lady of Nazareth of Engenho Itaperoá. The church is located on the former Fazenda Itaperoá, a sugarcane plantation, west of the city center São Cristóvão. The church belonged to the Parish of Our Lady of Victory, which included Santo Antônio and São Gonçalo, in Camassari. It was listed as a historic structure by the State of Sergipe in 1984; despite its heritage designation, the church is in advanced state of ruin.