Lehi is part of the Provo–Orem metropolitan area.

A group of Mormon pioneers settled the area now known as Lehi in the fall of 1850 at a place called Dry Creek in the northernmost part of Utah Valley. It was renamed Evansville in 1851 after David Evans, a local bishop in The Church of Jesus Christ of Latter-day Saints. Other historical names include Sulphur Springs and Snow's Springs. [6]

The land was organized into parcels of 40 acres (160,000 m2) and new settlers received a plot of this size until the entire tract was exhausted. There was little water to irrigate the rich soil, so it became necessary to divert a portion of American Fork Creek. Evansville consumed up to one-third of the creek's water, as authorized by the Utah Territorial Legislature.

The settlement grew so rapidly that, in early 1852, Bishop Evans petitioned the Utah Territorial Legislature to incorporate the settlement. Lehi City was incorporated by legislative act on February 5, 1852. It was the sixth city incorporated in Utah. The legislature also approved a request to call the new city Lehi, after a Book of Mormon prophet of the same name. [7] The first mayor of Lehi was Silas P. Barnes, from 1853-1854. [8]

The downtown area has been designated the Lehi Main Street Historic District by the National Park Service and is on the National Register of Historic Places.

Lehi has been transitioning from an agricultural economy to a technological economy. This first started with the lengthy construction of a DRAM microchip plant by Micron Technology, which eventually evolved into a NAND flash memory business called IM Flash Technologies that was founded by both Micron and the Intel Corporation with headquarters in Lehi. Currently, 1 out of every 14 flash memory chips in the world is produced in Lehi. [15] On June 30th, 2021, Texas Instruments announced that they would be purchasing this facility. [16]

Adobe Systems based one of its U.S. buildings in Lehi, which is home to about 900 employees. According to the Adobe website, "The team in Utah is focused on engineering, product development, sales, marketing, and operations for the industry-leading Adobe Marketing Cloud."

Ancestry.com moved its headquarters from Provo to Lehi in May 2016. The headquarters building is located in The Corporate Center at Traverse Mountain.

Lehi Roller Mills was founded in 1906 by a co-op of farmers. George G. Robinson purchased the mill in 1910, and it has since remained in the Robinson family, currently run by George's grandson, R. Sherman Robinson.

At the turn of the 21st century, Lehi Roller Mills was among thousands of such family-owned mills operating in the United States. Fewer than fifty remain today. High demand keeps the mill grinding around the clock, six days a week, and the mill produces some 100,000 pounds of flour each day. However, in 2012, the Mills filed for bankruptcy with the intention of continuing to operate during the proceedings. [23]

Lehi Roller Mills was featured in the 1984 film Footloose as Ren McCormack's (Kevin Bacon) workplace and as the site of the dance.

The turkey and peacock flour paintings of Lehi Roller Mills were painted on the silos about 1930 by Stan Russon of Lehi, Utah. He used a rope and pulley system to manually raise and lower himself to be able to paint.

At the time the film was made, Lehi Roller Mills was surrounded by nothing but vacant fields. In one scene, the Reverend Shaw Moore (John Lithgow) and his wife Vi Moore (Dianne Wiest) keep a wary eye on the proceedings while standing in a field some distance away. The area is now home to a variety of fast food restaurants and a shopping center. [24]

Thanksgiving Point is a nonprofit museum complex and estate garden founded in 1995. It consists of six main attractions: the Ashton Gardens, Thanksgiving Point Golf Course, the Museum of Ancient Life, the Museum of Natural Curiosity, Farm Country, and the Butterfly Biosphere. [27] Approximately 1.45 million people visit Thanksgiving Point each year. It is also a location for Megaplex Theaters and has several restaurants and gift shops. It is the site for the region's only Tulip Festival, an annual Scottish Festival, annual Cornbelly's Halloween attraction, [28] and Highland Games.

The complex is a 501(c)(3) organization with operations funded by private donations, venue and event admissions, and profits from shops and restaurants. [29]

The Hutchings Museum is a museum located near the center of Lehi. It was first established in 1955 in what is now the Lehi arts building. The museum later moved to 55 N Center St, Lehi, UT, its current location. The collection was donated to Lehi city from John and Eunice Hutchings, who were amateur collectors and naturalists.

Originally designed to be a memorial for the veterans in WW1 and has continued to expand to become many things: Library, Courthouse, Jail, Police Station, Fire Station, and some others.

The Hutchings Museum's exhibits include a large range of displays and artifacts from Native American Culture, Rocks and Minerals, Veteran's Memorial, Lehi History, History of the Wild West, and much more.

Some of the Museum's most notable artifacts are Butch Cassidy's Gun, their large collection of rocks and minerals, and Native American pottery. [30] The museum has online articles, photos, videos, 3-D video, and a virtual tour. [31]

Mountainland Technical College (MTECH) is a public technical training institution located in Lehi. MTECH serves high school and adult students at the Lehi location, offering programs of study in automotive, culinary arts, healthcare, information technology and a growing number of other industry and technical programs. MTECH offers community education programs such as training in basic computer skills and specific software programs and partners with many area employers in providing customized training for their employees through the Custom Fit program. [34]

Challenger School is located in Lehi, in the Traverse Mountain area. [35]

I-15 runs through Lehi, with five exits (at American Fork Main St/SR-145, Lehi Main St/SR-73, 2100 North/SR-194, Triumph Blvd, and Timpanogos Highway/SR-92) located in the city. [36] The Utah Transit Authority operates a bus system that reaches into the city. Work on the FrontRunner South commuter rail began in August 2008, and the Lehi station opened for service on December 12, 2012. [37] The Lehi station is located near Thanksgiving Point.

Beginning in the spring of 2018, the Utah Department of Transportation (UDOT) began major reconstruction of the I-15 between Lehi Main Street and SR-92 (Timpanogos Highway). [38] The project is contracted to be completed by October 2020 and updates can be found online. 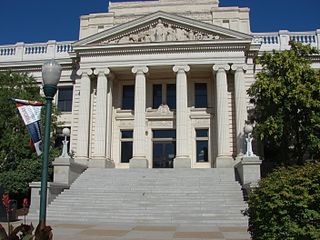 Utah County is the second-most populous county in the U.S. state of Utah. The county seat and largest city is Provo, which is the state's third-largest city, and the largest outside of Salt Lake County. As of the 2020 United States Census, the population was 665,665.

Corinne is a town in Box Elder County, Utah, United States. The population was 685 at the 2010 census.

Willard is a city in Box Elder County, Utah, United States. The population was 1,772 at the 2010 census. 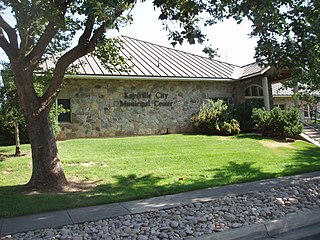 Kaysville is a city in Davis County, Utah. It is part of the Ogden–Clearfield metropolitan area. The population was 27,300 at the time of the 2010 census, with an estimated population of 32,390 in 2019.

Panguitch is a city in and the county seat of Garfield County, Utah, United States. The population was 1,520 at the 2010 census, and was estimated in 2018 to be 1,691. The name Panguitch comes from a Southern Paiute word meaning “Big Fish,” likely named after the plentiful nearby lakes hosting rainbow trout year-round.

Nephi is a city in Juab County, Utah, United States. It is part of the Provo–Orem metropolitan area. The population was 6,443 at the 2020 census. It is the county seat of Juab County. It was settled by Mormon pioneers in 1851 as Salt Creek, and it acquired its current name in 1882. It is the principal city in the Juab Valley, an agricultural area. Nephi was named after Nephi, son of Lehi, from the Book of Mormon.

Fillmore is a city and the county seat of Millard County, Utah, United States. The population was 2,435 at the 2010 United States Census. It is named for the thirteenth US President Millard Fillmore, who was in office when Millard County was created by the Utah Territorial legislature. 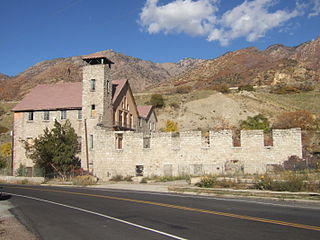 Cottonwood Heights is a city located in Salt Lake County, Utah, United States, along the east bench of the Salt Lake Valley. It lies south of the cities of Holladay and Murray, east of Midvale, and north of Sandy within the Salt Lake City, Utah Metropolitan Statistical Area. Following a successful incorporation referendum in May 2004, the city was incorporated on January 14, 2005. Cottonwood Heights had been a Census-designated place (CDP) before incorporation. The population as of the 2010 census was 33,433. This is a significant increase over the CDP's 2000 census count of 27,569.

Fairview is a city in northern Sanpete County, Utah, United States. The population was 1,247 at the 2010 census.

American Fork is a city in north-central Utah County, Utah, United States, at the foot of Mount Timpanogos in the Wasatch Range, north from Utah Lake. This city is thirty-two miles southeast from Salt Lake City. It is part of the Provo–Orem Metropolitan Statistical Area. The population was 33,337 in 2020. The city has grown rapidly since the 1970s. 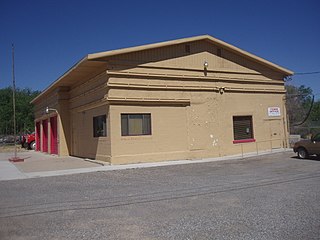 Goshen is a town in Utah County, Utah, United States. It is part of the Provo–Orem Metropolitan Statistical Area. The population was 921 at the 2010 census. 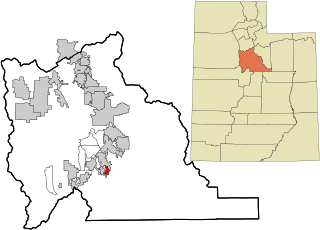 Woodland Hills is a city in Utah County, Utah, United States. It is part of the Provo–Orem Metropolitan Statistical Area. The population was 1,521 at the 2020 census. Woodland Hills became a city at the end of 2000. 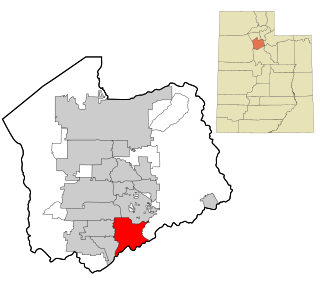 Deseret is a census-designated place in Millard County, Utah, United States. The population was 353 at the 2010 census. Deseret is located approximately 10 miles (16 km) southwest of Delta, and about 150 miles (240 km) southwest of Salt Lake City. The name Deseret comes from the Book of Mormon. 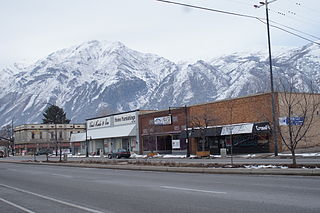 Richard S. Van Wagoner was an American historian, audiologist, and author who published works on the history of Utah and the history of the Latter Day Saint movement.

Utah is the 6th most populous state in the United States with a population of about 3.3 million, according to projections from the US Census Bureau's 2017 estimates. The state has also been characterized by a tremendous amount of growth in the last decade, with the highest percent increase in population of any state since 2010. Utah has a surface area of 84,899 square miles, though around 80% of its population is concentrated around a metropolitan area in the north-central part of the state known as the Wasatch Front.

The state of Utah has an increasingly diverse population, home to hundreds of thousands of Hispanic/Latino people who share ancestry from Latin American countries. It is estimated that there are roughly 383,400 residents of Hispanic/Latino descent currently living in Utah.

Lehi Roller Mills is a locally run and operated flour mill and historical landmark of Lehi, Utah. The original brick building was built in 1905 and has expanded since then. It has become an iconic feature of the Utah Valley as a filming location for Footloose (1984). The Roller Mills was added to the National Register of Historic Places in 1994. The building still stands today and is home to a renovated business model now named ‘Lehi Mills’.

Wikivoyage has a travel guide for Lehi, Utah .
This page is based on this Wikipedia article
Text is available under the CC BY-SA 4.0 license; additional terms may apply.
Images, videos and audio are available under their respective licenses.