Last updated February 03, 2023
Traditional province in the east of Ireland
For other uses, see Leinster (disambiguation).
Place in Ireland

Leinster ( /ˈlɛnstər/ LEN-stər; Irish : Laighin [ˈl̪ˠəinʲ] or Cúige Laighean [ˌkuːɟə ˈl̪ˠəinˠ] ) is one of the provinces of Ireland, situated in the southeast and east of Ireland. The province comprises the ancient Kingdoms of Meath, Leinster and Osraige. Following the 12th-century Norman invasion of Ireland, the historic "fifths" of Leinster and Meath gradually merged, mainly due to the impact of the Pale, which straddled both, thereby forming the present-day province of Leinster. The ancient kingdoms were shired into a number of counties for administrative and judicial purposes. In later centuries, local government legislation has prompted further sub-division of the historic counties.

Leinster has no official function for local-government purposes. However, it is an officially recognised subdivision of Ireland and is listed on ISO 3166-2 as one of the four provinces of Ireland. "IE-L" is attributed to Leinster as its country sub-division code. Leinster had a population of 2,858,501 according to the preliminary results of the 2022 census, making it the most populous province in the country. [2] The traditional flag of Leinster features a golden harp on a green background.

The Gaelic Kingdom of Leinster before 1171, considerably smaller than the present-day province, usually did not include certain territories such as Meath, Osraige or the Viking cities of Wexford and Dublin.

The first part of the name Leinster derives from Laigin , the name of a major tribe that once inhabited the area. [5] The latter part of the name derives either from the Irish tír or from the Old Norse staðr, both of which translate as "land" or "territory".

Úgaine Mór (Hugony the Great), who supposedly built the hill fort of Dún Ailinne, near Kilcullen in County Kildare, united the tribes of Leinster. He is a likely, but uncertain, candidate as the first historical king of Laigin (Leinster) in the 7th century BC. Circa 175/185 AD, following a period of civil wars in Ireland, the legendary Cathair Mor re-founded the kingdom of Laigin. The legendary Finn Mac Cool, or Fionn mac Cumhaill, reputedly built a stronghold at the Hill of Allen, on the edge of the Bog of Allen.

In the 4th and 5th centuries AD, after Magnus Maximus had left Britain in 383 AD with his legions, leaving a power vacuum, colonists from Laigin settled in North Wales, specifically in Anglesey, Carnarvonshire and Denbighshire. [6] In Wales some of the Leinster-Irish colonists left their name on the Llŷn Peninsula (in Gwynedd), which derives its name from Laigin. [7]

In the 5th century, the emerging Uí Néill dynasties from Connacht conquered areas of Westmeath, Meath and Offaly from the Uí Enechglaiss and Uí Failge of the Laigin. [8] Uí Néill Ard Righ attempted to exact the Boroimhe Laighean (cattle-tribute) from the Laigin from that time, in the process becoming their traditional enemies.

By the 8th century the rulers of Laigin had split into two dynasties: [9]

After the death of the last Kildare-based King of Laigin, Murchad Mac Dunlainge in 1042, [10] the kingship of Leinster reverted to the Uí Cheinnselaig sept based in the southeast in present-day County Wexford. [11] This southern dynasty provided all the later Kings of Leinster.

Leinster includes the extended "English Pale", counties controlled directly from Dublin, at the beginning of the 1600s. The other three provinces had their own regional "Presidency" systems, based on a Welsh model of administration, in theory if not in fact, from the 1570s and 1580s up to the 1670s, and were considered separate entities. Gradually "Leinster" subsumed the term "The Pale", as the kingdom was pacified and the difference between the old Pale area and the wider province, now also under English administration, grew less distinct.[ citation needed ]

The expansion of the province took in the territory of the ancient Kingdom of Mide encompassing much of present-day counties Meath, Westmeath and Longford with five west County Offaly baronies. [12] Local lordships were incorporated during the Tudor conquest of Ireland and subsequent plantation schemes.

Other boundary changes included County Louth, officially removed from Ulster in 1596, the baronies of Ballybritt and Clonlisk (formerly Éile Uí Chearbhaill in the county palatine of Tipperary) in Munster becoming part of Leinster in 1606, and the 'Lands of Ballymascanlon' transferred from Armagh to Louth circa 1630. The provincial borders were redrawn by Cromwell for administration and military reasons, and the Offaly parishes of Annally and Lusmagh, formerly part of Connacht, were transferred in 1660.

The last major boundary changes within Leinster occurred with the formation of County Wicklow (1603–1606), [13] from lands in the north of Carlow (which previously extended to the sea) and most of southern Dublin. [14] Later minor changes dealt with "islands" of one county in another. By the late 1700s, Leinster looked as shown in the above map of 1784.

The province is divided into twelve traditional counties: Carlow, Dublin, Kildare, Kilkenny, Laois, Longford, Louth, Meath, Offaly, Westmeath, Wexford and Wicklow. Leinster has the most counties of any province, but is the second smallest of the four Irish provinces by land area. With a population of 2,858,501 as of 2022, it is the island's most populous province. Dublin is the only official city in the province, and is by far its largest settlement. [15]

As of the 2016 census, the larger settlements in Leinster included:

As is the norm for language in Ireland, English is the primary spoken language, but there is an active Irish-speaking minority in the province. According to the Census of Ireland of 2011, there were 18,947 daily speakers of Irish in Leinster outside the education system, [30] including 1,299 native speakers in the small Gaeltacht of Ráth Chairn. As of 2011, there were 19,348 students attending the 66 Gaelscoils (Irish-language primary schools) and 15 Gaelcholáistí (Irish-language secondary schools) in the province, primarily in the Dublin area. [31]

A number of sporting and cultural organisations organise themselves on provincial lines, including Leinster Rugby, the Leinster Cricket Union, Leinster Hockey Association and Leinster GAA. While Leinster GAA is made up primarily of the traditional counties of the province, GAA teams from Galway, Kerry and Antrim have played in the Leinster Senior Hurling Championship, as has a team from London; Galway won the title in 2012. Participation of these counties is based on their performances in the Christy Ring Cup. 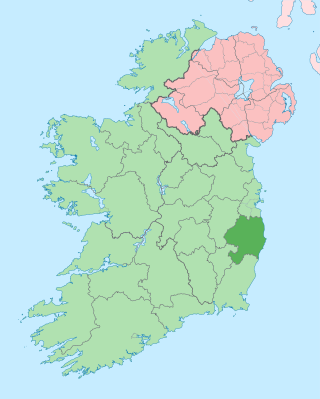 There have been four Provinces of Ireland: Connacht (Connaught), Leinster, Munster, and Ulster. The Irish word for this territorial division, cúige, meaning "fifth part", suggests that there were once five, and at times Meath has been considered to be the fifth province; in the medieval period, however, there were often more than five. The number of provinces and their delimitation fluctuated until 1610, when they were permanently set by the English administration of James I. The provinces of Ireland no longer serve administrative or political purposes but function as historical and cultural entities.

County Meath is a county in the Eastern and Midland Region of Ireland, within the province of Leinster. It is bordered by Dublin to the southeast, Louth to the northeast, Kildare to the south, Offaly to the southwest, Westmeath to the west, Cavan to the northwest, and Monaghan to the north. To the east, Meath also borders the Irish Sea along a narrow strip between the rivers Boyne and Delvin, giving it the second shortest coastline of any county. Meath County Council is the local authority for the county.

The Greater Dublin Area, or simply Greater Dublin, is an informal term that is taken to include the city of Dublin and its hinterland, with varying definitions as to its extent. As of 2022, its estimated population is 2,073,459. The Dublin Transport Authority Act 2008 defines the Greater Dublin Area as including the counties of Dublin, Meath, Kildare, and Wicklow. The area is defined for transport and strategic planning and is not a formal political unit. The term can also apply more narrowly to the Dublin urban area and nearby suburban towns.

The Laigin, modern spelling Laighin, were a Gaelic population group of early Ireland. They gave their name to the Kingdom of Leinster, which in the medieval era was known in Irish as Cóiced Laigen, meaning "Fifth/province of the Leinstermen", where their descendants ruled till the 17th century. Their territory, located in south-east Ireland, is thought to have once extended from the River Shannon to the River Boyne. The surnames of those descended from the Laigin are still counted amongst the most numerous in Ireland.

Lyons Hill or Lyons is a townland and restored village in County Kildare. At a time when canal passenger boats travelled at 3 mph (4.8 km/h) Lyons was the nearest overnight stop to Dublin on the Grand Canal. On the hilltop is a trigonometrical point used by Ireland's Ordnance Survey. The name derives from the Irish language name for an elm tree, Liamhan.

The Uí Dúnlainge, from the Old Irish "grandsons of Dúnlaing", were an Irish dynasty of Leinster kings who traced their descent from Dúnlaing mac Énda Niada a fifth century King of Leinster. He was said to be a cousin of Énnae Cennsalach, eponymous ancestor of the rival Uí Chennselaig. 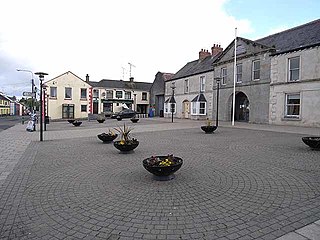 Arvagh, or Arva, is a village in County Cavan, Ireland, on the shores of Garty Lough and overlooked by Bruse Mountain. It is located on the junction of the R198 and R203 regional roads. 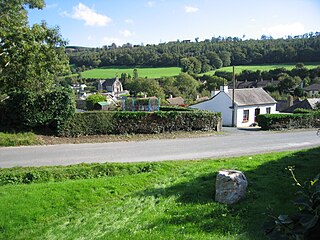 Glenealy is a village 8 km (5 mi) west of Wicklow Town, in County Wicklow, on the R752 road. The Dublin–Rosslare railway line also passes through the village. 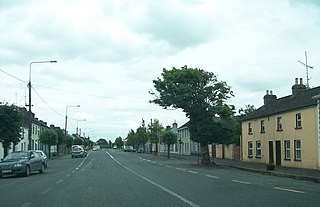 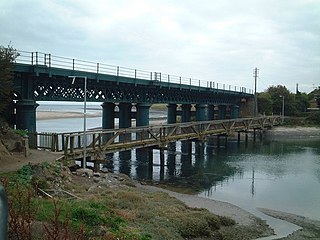 Laytown-Bettystown-Mornington is a census town in East Meath, County Meath, Ireland, comprising the adjoining villages of Laytown, Bettystown and Mornington. It had a population of 5,597 at the 2002 census, 10,889 at the 2011 census, and 11,872 as of the 2016 census. The coastline stretches from the River Boyne, which borders County Louth to the River Delvin, which borders County Dublin. This stretch of beach is 11 km (7 mi) long and constitutes the whole County Meath coastline.

Malachy MacMurrough was King of Leinster, Ireland in the late 10th and early 11th century.

Murchad mac Brain Mut was a King of Leinster from the Uí Dúnlainge branch of the Laigin. He was the son of Bran Mut mac Conaill, a previous king. He ruled from 715 to 727.

Muiredach mac Murchado was a King of Leinster from the Uí Dúnlainge branch of the Laigin. He was the son of Murchad mac Brain Mut, a previous king. He ruled from 738 to 760.

Events from the 8th century in Ireland. 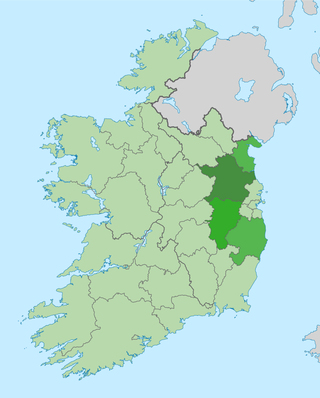 The Mid-East Region is a NUTS Level III statistical region of Ireland. It consists of the territory of the counties of Kildare, Louth, Meath and Wicklow. The Mid-East spans 6,891 km2, 9.8% of the total area of the state and according to the 2016 census had a population of 688,857, roughly 14.5% of the national population