Leonard Ashurst was born on 10 March 1939 in Fazakerley, Liverpool, to parents Elsie and Joseph. [1] Initially a centre-half, he was moved to left-back by Liverpool Schoolboys as the team were short on naturally left-footed players, and helped the side to win the English Schools Trophy with an 8–1 aggregate win over Southampton Schoolboys. [2] He was signed to the ground staff at Liverpool in 1954. [2] He also worked as an apprentice compositor in the printing trade. [3] He won seven caps for the England youth team in the 1956–57 season. [3] Despite this international recognition he was not offered a professional contract by Liverpool manager Phil Taylor, and instead joined Wolverhampton Wanderers on amateur terms. [4] Whilst playing third team football for Wolves, Ashurst was approached by Sunderland coach George Curtis, who promised him a professional contract at the club. In order to gain release from Wolves, Ashurst told manager Stan Cullis he wanted to leave professional football to continue his printing apprenticeship and to play for local Lancashire Combination team Prescot Cables; Cullis agreed, and Ashurst subsequently moved from Prescot Cables to Sunderland. [5]

Ashurst signed professional forms at Sunderland on 27 December 1957, and made his debut for the reserve team the following day. [6] Manager Alan Brown handed him his first team debut on 20 September 1958, in a 2–0 defeat to Ipswich Town at Roker Park; Jim McNab and Cecil Irwin also made their senior debuts in the match. [7] Brown was in the process of dismantling the team that had been relegated the previous season, and Ashurst went on to feature in a total of 33 Second Division matches across the 1958–59 campaign. [8] He was called up to the England under-23 team on 15 March 1961, in a 4–1 victory over Germany at White Hart Lane. [9]

Following the abolition of the maximum wage in January 1961, Ashurst signed a new contract at £40-per-week the following summer. [10] He went on to make 458 appearances for the club; putting him second in the all time appearances list in Sunderland's history, and one of only two outfield players to top 400 appearances. He scored four Sunderland goals during his time at the club. In the late sixties, alongside Jimmy Montgomery, Cecil Irwin, Martin Harvey, Charlie Hurley and Jim McNab, Ashurst formed one of the most notable and most settled back fives in Sunderland's history.

After receiving a testimonial match against Newcastle United, Ashurst was given a free-transfer to Hartlepool where he became a player-manager. He ended his playing career in the 1972-73 season while at Hartlepool, and subsequently remained manager until May 1974 when he was appointed manager of Gillingham.

Ashurst was appointed manager of Newport County in 1978 following the departure of Colin Addison to West Bromwich Albion. Ashurst was manager from 1978 to 1982, the most successful period in the club's history. Newport were promoted to the Third Division in the 1979–80 season and won the Welsh Cup, entitling them to play in the 1980–81 season European Cup Winners' Cup, reaching the quarter finals. Ashurst was sacked by Newport County in February 1982 and Addison returned as team manager. The team, largely assembled by Ashurst, attained Newport County's highest post-war finish in the 1982–83 season, 4th in the Third Division, narrowly missing out on promotion.

His time as Sunderland manager was not successful, despite taking them to their first ever League Cup final. [11] Performance in the league was poor and Sunderland were relegated from the first division. Ashurst was sacked in May 1985.

After returning to England, he was assistant manager of Blackpool, and then in September 1989 he returned for a second spell as manager of Cardiff City following the departure of Frank Burrows. He spent two years in Ninian Park before resigning in 1991 as the team struggled both on and off the pitch. [13] His last managerial role was a one-year stay at Weymouth. [14]

From the mid-1990s, Ashurst became heavily involved in an administrator's role at the Football Association specifically with regards to the Academy system. [15] In 2002, he became a Premier League match delegate, and was tasked with assessing match officials. [16]

Ashurst married Valerie in her home village of East Rainton in May 1961. [9]

Christopher Robert Turner is an English former footballer and manager who was most recently sales and marketing manager at Port Vale. He made 589 league and cup appearances in a 19-year career as a professional in the English Football League, and then took charge of a further 469 matches as a manager. 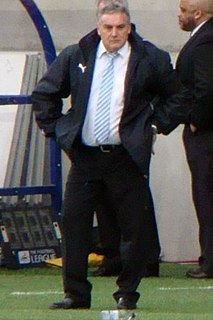 David Ronald Jones is an English former footballer and manager most recently with then, EFL League Two side, Hartlepool United.

Bryan Stanley Robson, better known as Pop Robson is an English former footballer who played as a centre-forward. He played for Newcastle United, West Ham United, Sunderland, Chelsea and Carlisle United, and scored 265 goals in 674 league games. He also earned one cap for England under-23s.

Neale James Cooper was a Scottish football player and coach. He played as a midfielder during the 1980s and 1990s, most prominently for the Aberdeen team managed by Alex Ferguson, and later played for Aston Villa, Rangers, Reading, Dunfermline Athletic and Ross County. Cooper then became a coach, and worked as a manager in England with Hartlepool United (twice) and Gillingham, and in Scotland with Ross County and Peterhead.

Gary Ernest Bennett is an English former professional footballer. A defender, he began his career with Manchester City before moving on to Cardiff City in 1981. In 1984, Bennett joined Sunderland and he went on to make over 350 appearances for the club, placing him fifth on the club's all-time appearance list. He left Sunderland in 1995, after eleven years at the club, and later played for Carlisle United, Scarborough and Darlington. During his career, he made over 600 appearances in the Football League, scoring 61 times.

Jeffrey David Johnson is a Welsh former footballer. In addition to his club career – playing over 400 games in the Football League, he also represented his country at youth and under-23 level.

The 1975–76 season was the 77th completed season of The Football League.

James Goodfellow was an English professional footballer and manager. A midfielder, he scored 39 goals in 535 league and cup appearances in a 13-year career in the English Football League.

The 1923–24 season was the 23rd season of competitive football played by Cardiff City F.C. and the team's third consecutive season in the First Division of the Football League. Cardiff had been promoted to the First Division in the 1920–21 season after finishing as runners-up in the Second Division.