Lenfilm (Russian: Ленфильм) is a Russian production company with its own film studio located in Saint Petersburg (the city was called Leningrad from 1924 to 1991, thus the name). It is a corporation with its stakes shared between private owners and several private film studios which operate on the premises. Since October 2012, the Chairman of the board of directors is Fyodor Bondarchuk. [3]

St. Petersburg was home to several Russian and French film studios since the early 1900s. In 1908, St. Petersburg businessman Vladislav Karpinsky opened his film factory Ominum Film, which produced documentaries and feature films for local theatres. During the 1910s, one of the most active private film studios was Neptun in St. Petersburg, where such figures as Vladimir Mayakovsky and Lilya Brik made their first silent films, released in 1917 and 1918.

Lenfilm's property was originally under the private ownership of the Aquarium garden, which belonged to the merchant Georgy Alexandrov, who operated a restaurant, a public garden and a theatre on the same site. Composer Peter Tchaikovsky came to what was then the Aquarium theatre (and is now Stage # 4 of Lenfilm) as a guest to the 1893 performance of the overture to his ballet The Nutcracker . Famous Russian bass singer Feodor Chaliapin performed there in the 1910s and the early 1920s. Stars of the Soviet era also gave performances there, such as Isaak Dunaevsky, and Leonid Utyosov with his jazz band during the 1920s and 1930s. [4]

The facilities and land of the Leningrad film studio were nationalized in 1918 and it was established as a Soviet state-funded film industry. Within just a few years it bore several different names, such as Petrograd Cinema Committee and SevZapKino, among various others. In 1923 the nationalized Aquarium garden was merged with SevZapKino and several smaller studios to form the Soviet state-controlled film industry in St. Petersburg. [5] During 1924–1926 it was temporarily named Leningrad Film Factory Goskino and eventually changed its name several times during the 1920s and 1930s.

At that time many notable filmmakers, writers, and actors were active at the studio, such as Yevgeni Zamyatin, Grigori Kozintsev, Iosif Kheifets, Sergei Eisenstein, Sergei Yutkevich, Dmitri Shostakovich, Nikolai Akimov, Yuri Tynyanov, Veniamin Kaverin, Viktor Shklovsky, and the writers of Serapion Brothers, as well as many other figures of Russian and Soviet culture.

Since 1934 the studio has been named Lenfilm.

During the Soviet era, Lenfilm was the second-largest (after Mosfilm) production branch of the Soviet film industry, which incorporated more than 30 film studios located across the former Soviet Union.

During World War II and the Siege of Leningrad, very few cinematographers remained active in the besieged Leningrad and made film documentaries about the heroic fight against the Nazis. At the same time, most personnel and production units of the Lenfilm studio were evacuated to cities in Central Asia, such as Alma-Ata (1942) and Samarkand. There Lenfilm temporarily merged with other Soviet film studios into the Central United Film Studio (TsOKS). Lenfilm returned to Leningrad in 1944.

Today in the Aquarium Theater there is a stage where many famous Lenfilm pictures were shot and many film stars played their roles. In 1975 George Cukor made a film there called The Blue Bird . Elizabeth Taylor was there, playing Queen of light in that film. Jane Fonda and Ava Gardner also worked there, at Stage # 4, the prior Aquarium Theatre. Orlando was partly filmed there with Tilda Swinton. Afghan Breakdown was shot there by Vladimir Bortko, with Michele Placido, who plays a Russian colonel. In the beginning of the 1990s there were about a dozen famous American scriptwriters and Oscar-winning actors and actresses who worked with Lenfilm.

By the end of the Soviet Union era, Lenfilm had produced about 1,500 films. Many film classics were produced at Lenfilm throughout its history and some of these were granted international awards at various film festivals.

After the dissolution of the Soviet Union, Lenfilm became a quasi-private film production company of Russia, retaining its name in spite of renaming of the city of Leningrad to St. Petersburg.

In 2004 Kinostudiya Lenfilm was re-organized into a privately owned company.

In 2007 Kinostudiya Lenfilm, together with Apple IMC, opened the Apple post-production training centre for filmmakers, where Apple computers are used for editing and special effects, as well as for training and certification of film editors in Final Cut Pro 5.1 and other Apple programs.

Nikolay Konstantinovich Cherkasov was a Soviet and Russian actor. People's Artist of the USSR (1947). 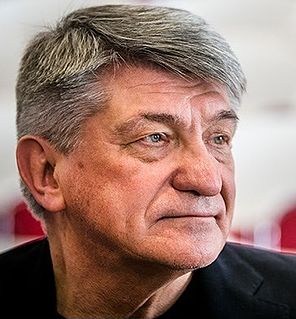 Alexander Nikolayevich Sokurov, PAR is a Russian filmmaker. His most significant works include a feature film, Russian Ark (2002), filmed in a single unedited shot, and Faust (2011), which was honoured with the Golden Lion, the highest prize for the best film at the Venice Film Festival. 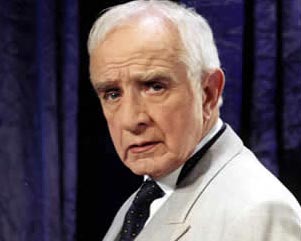 Igor Borisovich Dmitriev was a Soviet and Russian film and theatre actor who specialized in playing aristocratic characters in costume productions.

Pavel Petrovich Kadochnikov was a Soviet and Russian actor, film director, screenwriter and pedagogue. People's Artist of the USSR (1979) and Hero of Socialist Labour (1985). 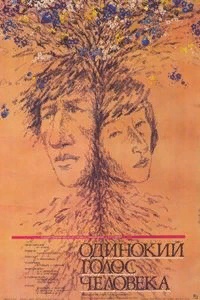 The Lonely Voice of Man, also known as The Lonely Human Voice, is the first full-feature film by Alexander Sokurov. It was originally filmed in 1978 and reconstructed in 1987 at the Lenfilm studios. The film is largely based on Andrei Platonov's River Potudan and Origin of the Master, although it is not a direct film adaptation in the traditional sense but rather a recreation of the spiritual nature of Platonov's prose. 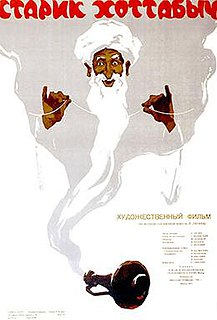 Starik Khottabych is a Sovcolor Soviet fantasy film produced in the USSR by Goskino at Kinostudyia Lenfilm in 1956, based on a children's book of the same name by Lazar Lagin who also wrote the film's script, and directed by Gennadi Kazansky. In the United States, the film was released theatrically by Sovexportfilm, with English subtitles, under the title The Flying Carpet through Artkino Pictures in 1960.

The Voice, is a 1982 Soviet psychological drama film. It is based on the screenplay of the same name by Natalya Ryazantseva and directed by Ilya Averbakh. This is the last film by director Ilya Averbakh.

This article is about the society and culture in Saint Petersburg. St. Petersburg has always been known for its high-quality cultural life, and its best known museum is the Hermitage. 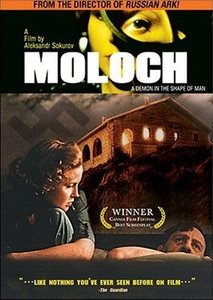 Moloch is a 1999 Russian biographical film, directed by Alexander Sokurov. The storyline was conceived from a screenplay written by Yuri Arabov and Marina Koreneva. It portrays Adolf Hitler living life in an unassuming manner during an abrupt journey to the Bavarian Alps. The film stars actors Leonid Mozgovoy, Yelena Rufanova, Vladimir Bogdanov, and Leonid Sokol in principal roles. Moloch explores companionship, intimacy and dictatorship.

Iosif Yefimovich Kheifits was a Soviet film director, winner of two Stalin Prizes, People's Artist of USSR (1964), Hero of Socialist Labor (1975). Member of the Communist Party of Soviet Union since 1945.

The Captivating Star of Happiness is a 1975 Soviet historical drama. The title is an allusion to a line from a poem by Alexander Pushkin. It is a costume drama dedicated "to the women of Russia". 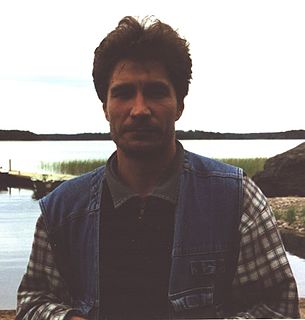 Vladimir Yurievich Kartashov was a Russian artist and award-winning production designer. He was a twin brother of poet and artist Alexander Kartashov.

Sergey Gerasimovich Mikaelyan was a Soviet film director and winner of the USSR State Prize (1976). He directed ten films between 1965 and 1986. His 1983 film Vlyublyon po sobstvennomu zhelaniyu was entered into the 33rd Berlin International Film Festival. 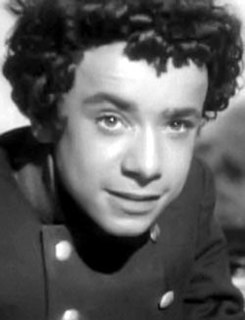 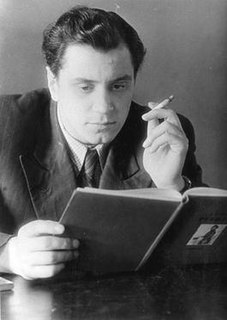 Igor Olegovich Gorbachyov was a Soviet and Russian actor, theater director and pedagogue. People's Artist of the USSR (1972). Hero of Socialist Labour (1987).

Gennady Petrovich Nilov is a Soviet and Russian actor. 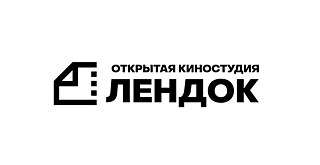 Saint Petersburg Documentary Films Studio or Lendoc is one of the largest documentary film studios in Russia, founded in 1932 as “Leningrad Newsreel Studio”. The studio continued to work during the Siege of Leningrad and it produced the very first documentary about the siege “Leningrad In Fight". The films produced on Lendoc have received numerous awards on Soviet and International film festivals.