The Leningrad Front (Russian : Ленинградский фронт) was formed during the 1941 German approach on Leningrad (now Saint Petersburg) by dividing the Northern Front into the Leningrad Front and Karelian Front on August 27, 1941. [1]

The Leningrad Front was immediately given the task of containing the German drive towards Leningrad and defending the city from the approaching Army Group North. By September 1941, German forces to the south were effectively stopped on the outskirts of Leningrad, initiating the two-and-a-half-year-long Siege of Leningrad. Although Finnish forces to the north stopped at the old Finnish–Soviet border, the Leningrad front suffered severe losses on the Finnish Front. From September 8, soldiers of the front were forced to conduct operations under the conditions of a blockade, with very little supply. Some supplies did reach the city however via the lake Road of Life.

During the blockade, the front executed various offensive and defensive operations, until finally with the help of the Baltic and Volkhov Front, the blockade was lifted. [1] From June 1942, Leonid Govorov had been the commander of the front, and in June 1944, he was awarded the title Marshal of the Soviet Union. In January 1943, forces of the Leningrad front made their first advances in years when they took the town of Shlisselburg from German forces, thus restoring communications between Leningrad and the rest of the country. In mid and late-January 1944 the Leningrad front, along with the Volkhov Front, the 1st Baltic Front and the 2nd Baltic Front, pushed back Army Group North and broke the 28-month-long blockade. Several days later, these forces would completely liberate all of the Leningrad Oblast and Kalinin Oblast. Six months later, the Leningrad Front took over the town of Narva. [1]

On April 21, 1944, parts of the Leningrad front were broken off to create the 3rd Baltic Front. In June 1944, the Leningrad front, along with the Baltic fleet had successfully carried out the Vyborg operation. As a result of which, Finland would later leave the German side of the war. From September–November 1944, the front participated in the Baltic Offensive, it advanced in the Narva-Tartu direction, and then towards Tallinn. Following the capture of continental Estonia, elements of the front, along with the Baltic fleet, took part in recapturing the Moonsund archipelago. These were the last offensive operations of the front. Forces of the Leningrad Front were then stationed on the Soviet-Finnish border, and all along the Baltic coast from Leningrad to Riga. Later, the Leningrad front was reinforced with elements of the recently disbanded 2nd Baltic Front. These forces were primarily stationed near the Courland Pocket, with the task of containing the German Army Group Courland, which would continue to resist Soviet forces up until the end of war in Europe. [1]

Upon its creation in August 1941, the Leningrad front included:

Following November 25, 1942, the structure of the Leningrad front constantly increased, it subsequently included: 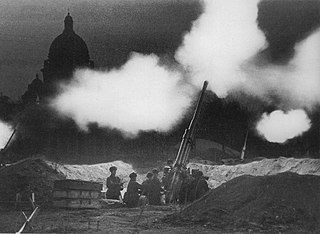 The siege of Leningrad was a prolonged military blockade undertaken from the south by the Army Group North of Nazi Germany against the Soviet city of Leningrad on the Eastern Front in World War II. The Finnish army invaded from the north, co-operating with the Germans until Finland had recaptured territory lost in the recent Winter War, but refused to make further approaches to the city.

Kirill Afanasievich Meretskov was a Soviet military commander. Having joined the Communist Party in 1917, he served in the Red Army from 1920. During the Winter War of 1939-1940 against Finland, he had the task of penetrating the Mannerheim Line as commander of the 7th Army. He was awarded the title of Hero of the Soviet Union shortly afterwards. 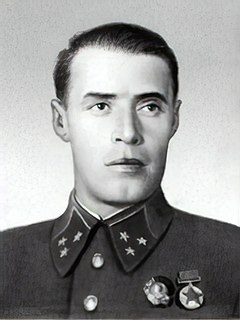 Markian Mikhaylovich Popov was a Soviet military commander, Army General, and Hero of the Soviet Union (1965). 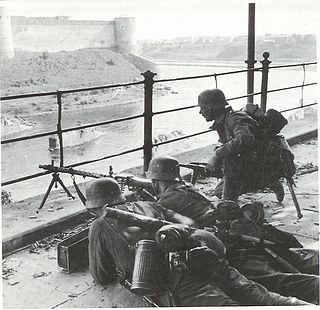 Operation Polar Star was an operation conducted by the Soviet Leningrad, Volkhov and Northwestern Fronts in February and March 1943. The operation was planned by Georgy Zhukov in the wake of the successful Operation Iskra and envisaged two separate encirclements. One was to be carried out in the north by the Leningrad and Volkhov Fronts near Mga and one was planned to be carried out further to the south, by the Northwestern Front, near Demyansk. 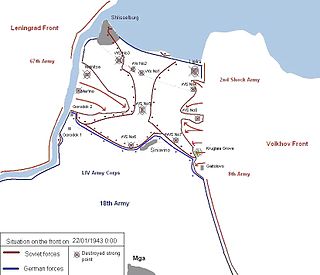 Operation Iskra, a Soviet military operation in January 1943 during World War II, aimed to break the Wehrmacht's Siege of Leningrad. Planning for the operation began shortly after the failure of the Sinyavino Offensive. The German defeat in the Battle of Stalingrad in late 1942 had weakened the German front. By January 1943, Soviet forces were planning or conducting offensive operations across the entire German-Soviet front, especially in southern Russia; Iskra formed the northern part of the wider Soviet 1942–1943 winter counter-offensive.

The Courland Pocket was a group of German forces of Reichskommissariat Ostland on the Courland Peninsula that was cut off and surrounded by the Red Army from July 1944 through May 1945.

The Volkhov Front was a major formation of the Red Army during the first period of the Second World War. It was formed as an expediency of an early attempt to halt the advance of the Wehrmacht Army Group North in its offensive thrust towards Leningrad. Initially the front operated to the south of Leningrad, with its flank on Lake Ladoga.

The 2nd Baltic Front was a major formation of the Red Army during the Second World War.

The 8th Army was a field army of the Soviet Red Army during the Second World War. 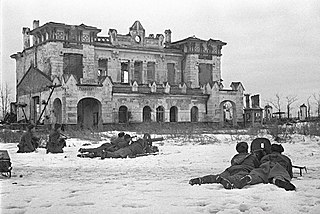 The Leningrad–Novgorod strategic offensive was a strategic offensive during World War II. It was launched by the Red Army on January 14, 1944 with an attack on the German Army Group North by the Soviet Volkhov and Leningrad fronts, along with part of the 2nd Baltic Front, with a goal of fully lifting the Siege of Leningrad. Approximately two weeks later, the Red Army regained control of the Moscow–Leningrad railway, and on January 26, 1944 Joseph Stalin declared that the Siege of Leningrad was lifted, and that German forces were expelled from the Leningrad Oblast. The lifting of the 900-day-long blockade was celebrated in Leningrad on that day with a 324-gun salute. The strategic offensive ended a month later on 1 March, when Stavka ordered the troops of the Leningrad Front to a follow-on operation across the Narva River, while the 2nd Baltic was to defend the territory it gained in pursuit of the German XVI Army Corps. 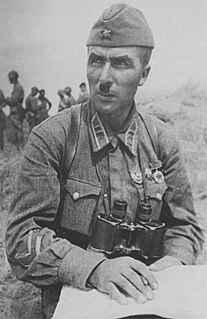 The Red Army's 54th Army was a Soviet field army during the Second World War. It was first formed in the Leningrad Military District in August, 1941, and continued in service in the northern sector of the Soviet-German front until the end of 1944. It spent much of the war attempting to break the German siege of Leningrad, in which it helped to achieve partial success in January, 1943, and complete success one year later. During these operations the soldiers of the 54th served under five different commanders, most notably Col. Gen. I.I. Fedyuninsky in the winter of 1941–42. After helping to drive Army Group North away from Leningrad and into the Baltic states in the first nine months of 1944, the army was deemed surplus to requirements on the narrowing front, and was officially disbanded on the last day of the year. 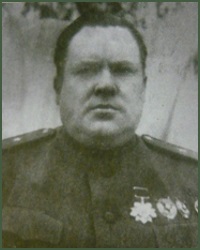 The 310th Rifle Division was a standard Red Army rifle division formed on July 15, 1941 in Kazakhstan before being sent to the vicinity of Leningrad, where it spent most of the war, sharing a similar combat path with its "sister", the 311th Rifle Division. The soldiers of the division fought until early 1944 to, first, hold open some sort of lifeline to the besieged city, then to break the siege and drive off the besieging German forces. They then participated in the offensive that drove Germany's Finnish allies out of the war. Finally, the division was redeployed to take the fight to the German heartland in the winter and spring of 1945. It ended the war north of Berlin with a very creditable combat record for any rifle division.

The 288th Rifle Division was an infantry division of the Soviet Union's Red Army during World War II. Formed in the summer of 1941, the division was sent into combat on the Volkhov Front in the fall of that year. The division served in the area until early 1944 when the Siege of Leningrad was ended and the 288th advanced into the Baltic states. The division spent the final months of the war blockading trapped German troops in the Courland Pocket before being disbanded in early 1946.

The 267th Rifle Division was an infantry division of the Soviet Union's Red Army during World War II.

The 376th Rifle Division was raised in 1941 as an infantry division of the Red Army, and served for the duration of the Great Patriotic War in that role. It began forming in August, 1941 in the Siberian Military District. It followed a very similar combat path to that of the 374th Rifle Division. It joined the fighting front in December with the new 59th Army along the Volkhov River and it continued to serve in the battles near Leningrad until early 1944. The division took horrendous casualties in the combat to create and hold open a passage to the 2nd Shock Army during the Lyuban Offensive and was itself partly or fully encircled at several times during this dismal fighting. The division finally left this region as it advanced during the Leningrad–Novgorod Offensive in January 1944 and in July won a battle honor in the liberation of Pskov, while its 1250th Rifle Regiment was awarded the Order of the Red Banner. In October the 376th as a whole would also receive the Red Banner for its part in the liberation of Riga. The division ended the war in Latvia, helping to contain and reduce the German forces trapped in the Courland Pocket, and was reorganized as a rifle brigade shortly thereafter.

The 377th Rifle Division was raised in 1941 as an infantry division of the Red Army, and served for the duration of the Great Patriotic War in that role. It began forming in August, 1941 in the Urals Military District. It followed a very similar combat path to that of the 374th and 376th Rifle Divisions. It joined the fighting front in December with the 4th Army, and then briefly came under command of 2nd Shock Army, but soon moved to the 59th Army along the Volkhov River, and continued to serve in this Army's battles near Leningrad until early 1944. The division took very heavy casualties during the Lyuban Offensive in several attempts to relieve the beleaguered 2nd Shock Army. After rebuilding the division held the Army's bridgehead over the Volkhov during 1943, and finally advanced during the Leningrad–Novgorod Offensive in January, 1944, taking part in the assault that liberated Novgorod. During the spring the division saw heavy fighting in the battles for Narva before moving south for the summer offensive into the Baltic states. In September it won a battle honor in the liberation of Valga, and in October also received the Order of the Red Banner for its part in the liberation of Riga. The division ended the war in Latvia, helping to contain and reduce the German forces trapped in the Courland Pocket, and was disbanded later in 1945.