During his brief college stay, Howell received several awards, including the 1989 Southwest Conference Tournament Most Outstanding Player award, being named to the 1990 NCAA Tournament Midwest Regional Team and winning that region's Most Outstanding Player award. Earlier that year, on February 21st, Howell had arguably his finest regular season performance - 32 points, 10 rebounds, four assists and a steal against Texas A&M. Considered a great follow-up shooter, and despite typically playing against much bigger defenders, he was Arkansas' leading scorer and second-leading rebounder in the 1990 tournament and was a constant in an otherwise-erratic offense. [2]

After his stint with Arkansas, Howell played a decade in Europe. [3] While playing for Computerij Meppel, he won the Dutch League Most Valuable Player twice.

Robert Joseph Cousy is an American retired professional basketball player. Cousy played point guard with the Boston Celtics from 1950 to 1963, and briefly with the Cincinnati Royals in the 1969–70 season. Making his high school varsity squad as a junior, he went on to earn a scholarship to the College of the Holy Cross, where he led the Crusaders to berths in the 1948 NCAA Tournament and 1950 NCAA Tournament, and won NCAA All-American honors for three seasons.

Christian Donald Laettner is an American former basketball player. His college career for the Duke Blue Devils is widely regarded as one of the best in National Collegiate Athletic Association (NCAA) history. He was the star player on the back-to-back Duke National Championship teams of 1991 and 1992, and the NCAA player of the year in his senior year. He is particularly famous for his game-winning shot against Kentucky in the 1992 tournament and for the hatred he received from opposing fans. 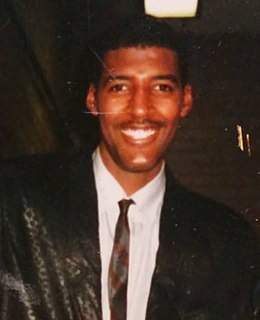 Roy James Tarpley was an American professional basketball player. He played the power forward and center positions in the National Basketball Association (NBA), earning an NBA Sixth Man of the Year Award in 1988. Tarpley was banned from the NBA because of his drug and alcohol abuse. He had great success playing in Europe, most notably for Olympiacos and Aris. 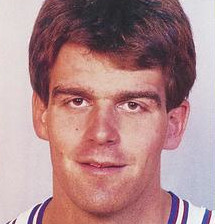 Joseph William Kleine is a retired American professional basketball player who played fifteen seasons in the National Basketball Association (NBA) and for the US national team. He won a gold medal as a member of the United States men's basketball team at the 1984 Summer Olympics in Los Angeles. In 1998, he won the NBA championship as a member of the Chicago Bulls. Kleine is now a restaurant proprietor, owning a number of successful Corky's Ribs & BBQ restaurants.

Terry Gilbert Dischinger is an American former basketball player in the National Basketball Association (NBA). Dischinger was a 3-time NBA All-Star and the 1963 NBA Rookie of the Year, after averaging 28 points per game in his three seasons at Purdue University.

Joe Barry Carroll is an American former professional basketball player who spent ten seasons in the National Basketball Association (NBA). After retiring from basketball, he became a wealth advisor, philanthropist, artist, author of the memoir Growing Up... In Words and Images, and recipient of the Hank Aaron Champion for Justice award.

Velvet James Barnes, also known as Jim "Bad News" Barnes, was an American basketball player, who was an Olympic Gold Medalist and the No. 1 overall pick of the 1964 NBA draft. He played college basketball Texas Western College.

The Arkansas Razorbacks basketball team represents the University of Arkansas in Fayetteville, Arkansas in NCAA Division I men's basketball competition. The team competes in the Southeastern Conference.

Mark Cecil Workman was an American professional basketball player from Charleston, West Virginia. He played collegiately at West Virginia University. Workman was the first overall pick in the 1952 NBA draft, by the Milwaukee Hawks. 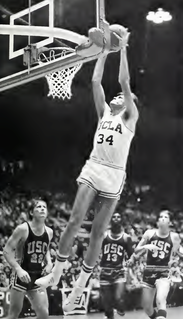 David William Meyers was an American basketball player who played for the Milwaukee Bucks of the National Basketball Association (NBA). The forward played college basketball for the UCLA Bruins. He was an All-American as a senior in 1975, when he won his second national championship with UCLA. He was drafted in the first round of the 1975 NBA draft with the second overall pick, and played four years professionally with the Bucks. 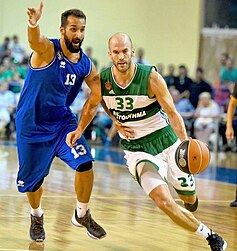 Nicholas William Calathes is a Greek American professional basketball player for FC Barcelona Lassa of the Spanish Liga ACB and the EuroLeague. He played college basketball for the Florida Gators. An All-EuroLeague First Team selection in 2018 and 2019, Calathes has also played in the NBA and the VTB United League. He represents the National Basketball Team of Greece internationally.

The 1994–95 Georgetown Hoyas men's basketball team represented Georgetown University in the 1994–95 NCAA Division I basketball season. John Thompson, coached them in his 23rd season as head coach. They played their home games at USAir Arena in Landover, Maryland. They were members of the Big East Conference and finished the season with a record of 21-10, 11-7 in Big East play. Their record earned them a bye in the first round of the 1995 Big East Men's Basketball Tournament, and they advanced to the tournament semifinal before losing to Connecticut. They were awarded a No. 6 seed in the Southeast Region of the 1995 NCAA Men's Division I Basketball Tournament – Georgetown's 16th NCAA Tournament appearance in 17 years – and advanced to the Southeast Region Semifinals before losing to region's No. 2 seed, North Carolina. They were ranked No. 22 in the season's final Associated Press Poll and No 16 in the postseason Coaches' Poll.

Peter Jeffrey Hooley is an Australian professional basketball player who last played for Melbourne United of the Australian National Basketball League (NBL). He played college basketball for the University of Albany.

The 2019–20 Arkansas Razorbacks men's basketball team represented the University of Arkansas during the 2019–20 season. The team was led by first-year head coach Eric Musselman, and played their home games at Bud Walton Arena in Fayetteville, Arkansas as a member of the Southeastern Conference. The Razorbacks finished with a record of 20–12 (7–11), with junior Mason Jones earning a share of the SEC Player of the Year award and being named a consensus First-Team All-SEC player.

Reginald Jordan Perry is an American professional basketball player for the Brooklyn Nets of the National Basketball Association (NBA), on a two-way contract with the Long Island Nets of the NBA G League. He played college basketball for the Mississippi State Bulldogs.

Mason Christopher Jones is an American basketball player for the Philadelphia 76ers of the National Basketball Association (NBA), on a two-way contract with the Delaware Blue Coats of the NBA G League. He played college basketball for the Connors State Cowboys and the Arkansas Razorbacks.