He was ordained in 1912 and was a curate at Ashford (1914–19). He was interviewed by the Chaplain-General in November 1916 for a commission as a Temporary Chaplain to the Forces. It was noted that, unusually, he could ride, speak French and German and preach extempore. He was posted to Malta, "the nurse of the Mediterranean", where he was given a "very satisfactory report". [2] He was demobilised in 1919. When peace returned he became a lecturer at Bishop's College, Cheshunt and then Warden of the Scholar Cancellarii, Lincoln. Appointed Archdeacon of Auckland in 1936, he was ordained to the episcopate as Bishop of Jarrow three years later. [3] While at Jarrow, he conducted the wedding of his secretary to Michael Ramsay, future Archbishop of Canterbury. [4] Owen was a highly regarded scholar and was considered for the vacant diocesan bishoprics at Southwell (1941), [5] Blackburn [6] and Lincoln (1942) [7] but he was not appointed. Instead, Archbishop Temple arranged for his translation to another suffragan bishopric, Maidstone, in 1943 with special responsibility for supporting Chaplains and for making arrangements for post-War ordination candidates who had fought in the War. [8] The following year, Owen was preaching in the Guards Chapel in London when it was hit by a flying bomb. [9] He was physically unhurt but badly shaken by the experience. Nevertheless, he was considered for the diocesan sees of Salisbury [10] and Lincoln in 1946 [11] and was appointed to Lincoln. Although he had been assured by his doctors of his fitness for the post, he fell ill and died in March 1947, aged 60. "He did not make public appearances, or write books, or attract attention to himself. It required a flying bomb to make him for a moment a head-line figure". [12]

William Louis Anderson was the Church of England Bishop of Portsmouth and then the Bishop of Salisbury. He also held what is believed to be the unique distinction of being the only bishop to have served in all three of the armed services. 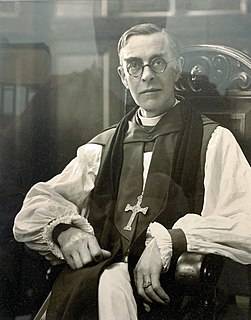 Leslie Hamilton Lang was the fourth Bishop of Woolwich.

John Alexander Ramsbotham was an eminent Anglican clergyman during the middle third of the 20th century.

Harold William Bradfield was an Anglican bishop who served as Bishop of Bath and Wells from 1946 to 1960. 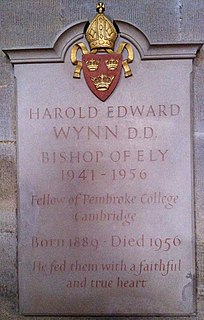 Richard Brook was a scholar and academic who was Bishop of St Edmundsbury and Ipswich from 1940 to 1953. Brook was born in Bradford in 1880 and was educated at Bradford Grammar School and Lincoln College, Oxford, where he was awarded 1st Class Honours in Modern History and Theology. He was a Fellow of Merton College, Oxford, 1907–19, and he contributed an essay in ‘Foundations’ in 1912, an influential publication expressing ‘Christian belief in terms of modern thought’. 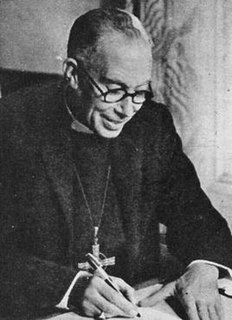 Clifford Arthur Martin was an Anglican bishop. He was the fourth Bishop of Liverpool, serving from 1944 to 1965.