Letitia Dunbar-Harrison (4 February 1906 [1] – 1994) was an Irish librarian who became the subject of a controversy over her appointment. [2] [3] A graduate of Trinity College Dublin, [4] she is the subject of the 2009 book by Pat Walsh, The Curious Case of the Mayo Librarian, and a RTÉ documentary of the same name. [3]

In 1930, a vacancy for county librarian arose in County Mayo, the county with the smallest non-Catholic minority in Ireland. Dunbar-Harrison was recommended for the role by the Local Appointments Commission. [4] [5] The Library Committee of Mayo County Council, mostly consisting of prominent local Catholics as well as a bishop, refused to endorse the recommendation, claiming her grasp of Irish was inadequate. [6] During the debate, it was asked "could a Protestant be trusted to hand out books to Catholics?". [6]

The County Council accordingly did not sanction her nomination. In response, the government dissolved the County Council and replaced it with a Commissioner who appointed Dunbar-Harrison to the role of county librarian. [6] [2] [4]

The government's stance was strongly opposed by some prominent Catholic clerics and politicians, including Opposition leader Éamon de Valera. [6] Despite the government standing its ground on the appointment, a boycott of the library ensued which eventually resulted in W. T. Cosgrave, President of the Executive Council, and Catholic Archbishop of Tuam, Dr. Thomas Gilmartin, coming to an agreement to transfer Dunbar-Harrison from Mayo to a Department of Defence post in Dublin in January 1932. [6] [4] [7]

Debate about motives for non-appointment

The reason given by the County Council for not appointing her as librarian was her insufficient grasp of Irish: [2]

A certain advertisement was issued by the Local Appointments Commissioners. I am speaking from recollection, as I have not the necessary data at hand, but I am sure that the Minister will be in a position to put me right. The advertisement stipulated that a competent knowledge of Irish was necessary for the position. The resolution refusing to appoint Miss Dunbar as librarian was passed first by the Library Committee. It dealt only with her knowledge of Irish. That resolution subsequently came before the County Council, and was ratified by that body. The resolution dealt with one question only, and that was that Miss Dunbar did not possess a competent knowledge of Irish.

J. J. Lee suggested that the resentment of local people towards the Local Appointments Commission for appointing someone with little or no local connections may also have been a factor, but argued that sectarianism was also involved: [4]

Even local resentment at what was perceived as metropolitan intrusion was not the core of the problem. It was rather than Miss Dunbar-Harrison suffered from the dual stigma of being a Protestant and a graduate of Trinity College Dublin.

He cited one J.T. Morahan who was:

opposed to the appointment of a product of Trinity to the position of Librarian in this County. Trinity culture is not the culture of the Gael; rather it is poison gas to the kindly Celtic people.

Michael D. Higgins also suggested that sectarianism was a factor: [8]

I refer to the case of Miss Dunbar Harrison in Mayo who was appointed by the Local Appointments Commission as a librarian. When she had opted to work in Mayo she was told that 24 out of the 26 members of the library committee would not have her. She was a Protestant and a Trinity graduate. Later someone said that it would be all right if she was handing out books but that she might recommend a book to somebody and no less a person than Mr. de Valera suggested that Mayo people were entitled to have someone they wanted handing books out to children.

Professor John A. Murphy argued that it was a case of local versus national government: [9]

The Taoiseach drew up Mr. de Valera's attitude to the appointment of a librarian in County Mayo. It might be noted for the record that the reason why his political opposite number — I think it was General Mulcahy who was the appropriate Minister at that time — in Cumann na nGaedheal wanted to keep Miss Letitia Dunbar Harrison in office was not because he was somehow inflamed with non-sectarian zeal but because he did not like the action of the Mayo County Council in suspending her. It was a government versus local government dispute rather than anything else.

The government resolved the situation by offering her a post in the Military Library in Dublin, which she accepted. [3]

She had met a Methodist minister, Reverend Robert Crawford, while in Castlebar. They married a few months after she started work in the Military Library, and she then became known as Aileen Crawford. [3] Because of the marriage bar she had to resign her post. [3]

The couple lived in Waterford, Tipperary, Louth and Antrim and had no children. [3] After being widowed in the 1950s, she remained in Northern Ireland.

She attempted to become a Methodist minister, but was failed on one of her written exams for the post. [3] She remained an active member of her church for many years and died in 1994. [3] 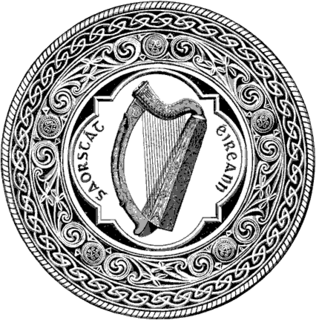 In Ireland, direct elections by universal suffrage are used for the President, the ceremonial head of state; for Dáil Éireann, the house of representatives of the Oireachtas or parliament; for the European Parliament; and for local government. All elections use the proportional representation by means of the single transferable vote (PR-STV) in constituencies returning three or more members, except that the presidential election and by-elections use the single-winner analogue of STV, elsewhere called instant-runoff voting or the alternative vote. Members of Seanad Éireann, the second house of the Oireachtas, are partly nominated, partly indirectly elected, and partly elected by graduates of particular universities.

Joanna Tuffy is an Irish Labour Party politician who served as a Teachta Dála (TD) for the Dublin Mid-West constituency 2007 to 2016. She was a Senator for the Administrative Panel from 2002 to 2007. 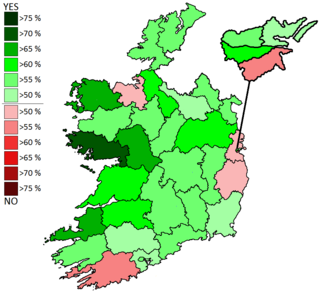 In the Irish Free State, the Governor-General's Address or Governor-General's Speech was a formal address delivered by the Governor-General to Dáil Éireann, modelled on the speech from the throne given in other Dominions of the British Commonwealth. The address was written by the Executive Council and outlined the bills it intended to introduce. Technically the address was only to the Dáil, not to a joint session of both Houses of the Oireachtas. However, members of Seanad Éireann were invited into the Dáil chamber to attend the address, and subsequently discussed it after returning to their own chamber. 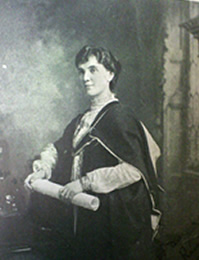 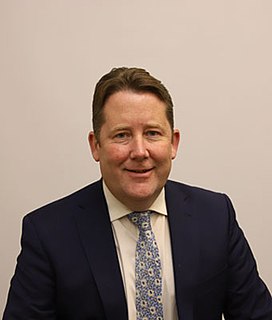 Darragh O'Brien is an Irish Fianna Fáil politician who has served as Minister for Housing, Local Government and Heritage since June 2020.

The Third Amendment of the Constitution Bill 1958 was a proposal to amend the Constitution of Ireland to alter the electoral system from proportional representation under the single transferable vote (PR-STV) to first-past-the-post (FPTP). The proposal was rejected in a referendum held on 17 June 1959. This was the same date as the presidential election in which Taoiseach Éamon de Valera was elected as president.

An election for 19 of the 60 seats in Seanad Éireann, the Senate of the Irish Free State, was held on 17 September 1925. The election was by single transferable vote, with the entire state forming a single 19-seat electoral district. There were 76 candidates on the ballot paper, whom voters ranked by preference. Of the two main political parties, the larger did not formally endorse any candidates, while the other boycotted the election. Voter turnout was low and the outcome was considered unsatisfactory. Subsequently, senators were selected by the Oireachtas rather than the electorate.

Jane Wyse Power was an Irish activist, feminist, politician and businesswoman. She was a founder member of Sinn Féin and also of Inghinidhe na hÉireann. She rose in the ranks to become one of the most important women of the revolution. As President of Cumann na mBan, she left the radicalised party and formed a new organisation called Cumann na Saoirse, holding several senior posts in the Dáil during the Free State.

This is a list of the members of the 1922 Seanad Éireann, the upper house of the Oireachtas (legislature) of the Irish Free State. It was first constituted on 8 December 1922. The Free State Seanad was elected in stages and thus considered to be in permanent session. However, as a gesture of continuity with its Free State predecessor, the first Seanad elected after 1937 is numbered as the "Second Seanad". The Free State Senate, despite the occurrence of five senatorial elections before its abolition, is considered to have been a single 'Seanad' for the duration of its existence and is thus referred for that whole period as the "First Seanad".

There are 60 members of the 26th Seanad Éireann, the upper house of the Oireachtas. Of these, 49 were elected on a restricted franchise, polls closing on 30–31 March; subsequently the remaining 11 members were nominated by the Taoiseach, Micheál Martin, on 27 June 2020.