He was born in Walthamstow, Essex, the eldest son of William Dillwyn (1743–1824) and Sarah Dillwyn (née Weston). His father, a Pennsylvanian Quaker had returned to Britain in 1777 during Philadelphia's worst period in the American War of Independence and settled at Higham Lodge, Walthamstow, Essex, UK. William Dillwyn was a vociferous anti-slavery campaigner and toured England and South Wales in his work for the Anti-Slavery Committee. William Dillwyn was related to George Haynes through the Emlen and Physick families in Philadelphia and it is likely that the opportunity to buy the Cambrian Pottery in Swansea, Wales, from Haynes came about through these family connections in America.

William's letters to his daughter Suzanna are held by the Library Company of Philadelphia and stored at the Historical Society of Pennsylvania. These letters show that the factory was bought by William to keep Lewis active while the latter was suffering from gout. The highlight of this period of production of Swansea Pottery was the opening by Lewis Weston Dillwyn and George Haynes of the Cambrian Company, the Swansea Potteries London Warehouse on Fleet Street which operated between 1806 and 1807. [2] In 1814 the pottery took over the workforce of the Nantgarw Pottery and began to make porcelain.

Lewis Weston Dillwyn however was also renowned for his published works on botany and conchology, including his 1809 work The British Confervae , an illustrated study of British freshwater algae. Dillwyn is credited with discovering several species of the Conferva genus. Among the botanical illustrators of The British Confervae are the artists William Jackson Hooker, Ellen Hutchins and William Weston Young. He was elected in 1804 as a Fellow of the Royal Society.

In 1817 he temporarily retired from the pottery. In 1818 he became High Sheriff of Glamorgan and was elected to the First Reformed Parliament in 1834 as MP for Glamorganshire. He bought Sketty Hall near Swansea and was elected Mayor of Swansea in 1839. [3] Dillwyn was also one of the founders of the Royal Institution of South Wales and its first President, and in 1840 he published a short history of Swansea.

He married Mary Adams, the daughter of Colonel John Llewelyn of Penllergaer, Llangyfelach in 1807. They had six children, including the noted photographer John Dillwyn Llewelyn (1810–1882), MP for Swansea Lewis Llewelyn Dillwyn (1814-1892) and pioneering female photographer Mary Dillwyn (1816-1906). His granddaughters by his son Lewis were the novelist and industrialist Amy Dillwyn, and lepidopterist Mary De la Beche Nicholl. His granddaughter by John was the Welsh astronomer and pioneer in scientific photography Thereza Dillwyn Llewelyn. [4]

The standard author abbreviation Dillwyn is used to indicate this person as the author when citing a botanical name. [5]

Taxa named by Dillwyn include: 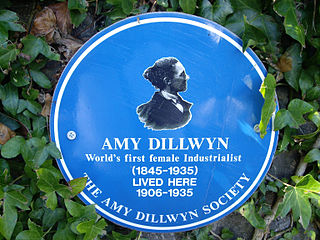 Elizabeth Amy Dillwyn was a Welsh novelist, businesswoman, and social benefactor. She was one of the first female industrialists in Britain.

Dillwyn may refer to the following: 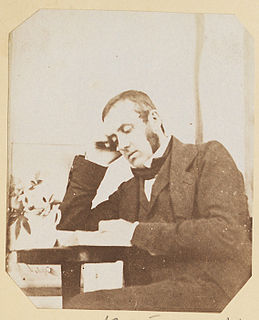 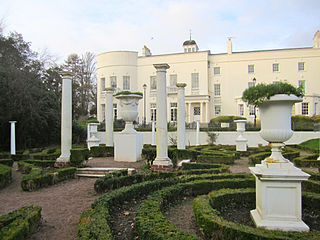 Sketty Hall is a venue used for hosting social functions, business functions and conferences in Singleton Park, Swansea, south Wales. The original building was built in the early 18th century as a private house. Over the years it has seen a number of extensions, modifications and changes of use to its present-day role.

Swansea was a borough constituency. It was represented in the House of Commons of the Parliament of the United Kingdom. It elected one Member of Parliament (MP) by the first-past-the-post system of election. 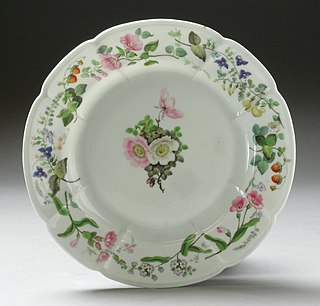 The Cambrian Pottery was founded in 1764 by William Coles in Swansea, Glamorganshire, Wales. In 1790, John Coles, son of the founder, went into partnership with George Haynes, who introduced new business strategies based on the ideas of Josiah Wedgwood. Lewis Weston Dillwyn became a partner in 1802 and sole owner when George Haynes left the pottery in 1810. 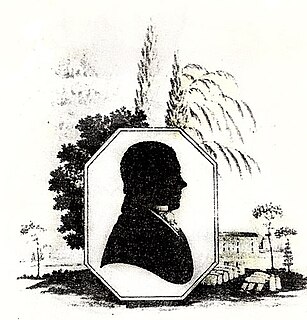 The Nantgarw China Works was a porcelain factory, later making other types of pottery, located in Nantgarw on the eastern bank of the Glamorganshire Canal, 8 miles (13 km) north of Cardiff in the River Taff valley, Glamorganshire, Wales. The factory made porcelain of very high quality, especially in the years from 1813–1814 and 1817–1820. Porcelain produced by Nantgarw was extremely white and translucent, and was given overglaze decoration of high quality, mostly in London or elsewhere rather than at the factory. The wares were expensive, and mostly distributed through the London dealers. Plates were much the most common shapes made, and the decoration was typically of garlands of flowers in a profusion of colours, the speciality of the founder, William Billingsley. With Swansea porcelain, Nantgarw was one of the last factories to make soft-paste porcelain, when English factories had switched to bone china, and continental and Asian ones continued to make hard-paste porcelain.

William Billingsley (1758–1828) was an influential painter of porcelain in several English porcelain factories, who also developed his own recipe for soft-paste porcelain, which produced beautiful results but a very high rate of failure in firing. He is a leading name associated with the English Romantic style of paintings of groups of flowers on porcelain that is sometimes called "naturalistic" by older sources, although that may not seem its main characteristic today.

Thomas Pardoe was a British enameler noted for flower painting.

This article is about the particular significance of the year 1778 to Wales and its people. 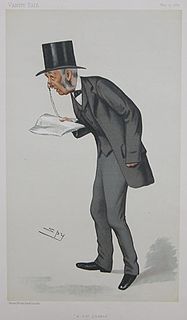 Lewis Llewelyn Dillwyn was a Welsh industrialist and Liberal politician who served as MP for Swansea for 37 years.

The Glamorgan Pottery was situated on the banks of the River Tawe, Swansea, Wales, from 1814 until 1838, producing various earthenware products.

Mary Dillwyn (1816–1906) is considered to be the earliest female photographer in Wales, who took photographs of flowers, animals, family and friends in the 1840s and 1850s. She provided a raw insight to the domestic lives of women and children living in 19th century Britain, pushing the boundaries of what could be considered as worthy subjects to photograph.

Robert John Dickson Burnie was a Liberal politician who served as MP for the Swansea Town constituency from 1892 to 1895. He was regarded as being on the radical wing of the party and was popular with working-class electors. Defeated by Sir John Llewelyn in 1895 he was rejected as a candidate for the constituency in 1900 due to his opposition to the South African War.

Lewis Dillwyn may refer to:

William Dillwyn,, was an American-born Quaker active in the abolitionist movement in colonial America and after 1774, Great Britain. He was one of the twelve committee members of the Society for Effecting the Abolition of the Slave Trade when it was formed in 1787.