Li Chunfeng (simplified Chinese :李淳风; traditional Chinese :李淳風; pinyin :Lǐ Chúnfèng; Wade–Giles :Li Ch'un-feng) (602–670) was a Chinese mathematician, astronomer, historian, and politician who was born in today's Baoji, Shaanxi during the Sui and Tang dynasties. He was first appointed to the Imperial Astronomy Bureau to help institute a calendar reform. He eventually ascended to deputy of the Imperial Astronomy Bureau and designed the Linde calendar. His father was an educated state official and also a Taoist. Li died in Chang'an in 670.

The Sui Dynasty was integral for uniting China, so it was a good time for learning. But when Li was sixteen the Sui fell, and the Tang rose. Nevertheless, the Tang did not harm the conditions for education. Indeed, it rather strengthened it. The Imperial Academy's math teaching was formalized. He was appointed into the Imperial Astronomy Bureau as an advanced court astronomer and historian, in 627. Once several years had passed, he then was promoted to deputy director of the Imperial Astronomy Bureau in 641, and even director in 648. He was given these titles because the Chinese calendar of the era, despite that it had only been used for several years, was already having accuracy problems in predicting eclipses. In fact, Li was appointed partially because of his critique of the Wuyin calendar. Wang Xiaotong had been chosen to study the problem earlier. This was a very important job because of the Chinese belief in the Mandate of Heaven. So if one altered the calendar, that person would have some control over the connection between the heavens and the emperor.

In 665, Li introduced a reform calendar. It was called the Linde calendar. It improved the prediction of planets' positions and included an “intercalary month.” That is similar to the idea of a leap day. It would catch up a lunar year to a solar year because twelve lunar months are 1.3906 days short of one solar year. It was added every three years. The Linde calendar is the most prominent accomplishment of Li.

Li wrote a document complaining about the use of outdated equipment in the Imperial Astronomy Bureau, so he was commanded to construct a new armillary sphere. He completed it in 633. His construction had an additional third ring as opposed to the more common design of only two rings.

Li added corrections to certain mathematical works. Examples of this are in Nine Chapters on the Mathematical Art by Liu Hui. He demonstrated that the least common multiple of the numbers two, three, four, five, six, seven, eight, nine, ten, eleven, and twelve was 27720, the answer was flawed in the original text. Yet another instance of this was in Zu Geng's work about the area of a sphere. [1] Li gave 22/7 (3.1428571428571428571428571428571) instead of three as a better approximation of what we know now as pi. He began each annotation with the words “Your servant, Chunfeng, and his collaborators comment respectfully on…” Li did write some mathematical works of his own, little is known about them. They are usually dismissed as unimportant in comparison to his other accomplishments. With Liang Shu and Wang Zhenru, he wrote Shibu Suanjing (十部算经) in 656. These were ten mathematical manuals submitted to the emperor.

Li contributed to the Book of Sui and Book of Jin , which cover the history of the Sui and Jin dynasties. He wrote about the discoveries in astrology, metrology, and music. These are the official histories of the periods. The book Massage-Chart Prophecies (Tui bei tu) is generally credited to Li. The book is a collaboration of attempts to predict the future using numerology. Therefore, Li is often thought of as being a prophet. The book gets it title from a poem near the end, discussing how much time it would take to tell the story of thousands of years, it would be better to take a break and enjoy a massage. Circa 640, Li wrote the Ganying jing 感應經 to elaborate the concept of ganying cosmic correspondence. Li wrote a book discussing the importance of astrology in Chinese culture called Yisizhan in 645. This is around when he would have been working on the Linde calendar. Yet another of is works is Commentary on and Introduction to the Gold Lock and the Flowing Pearls. In this book he describes Taoist customs that was probably part of influence from his father. 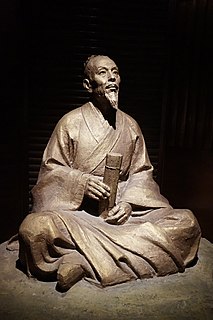 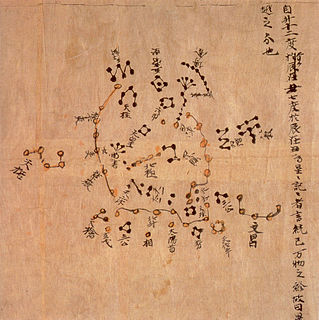 Astronomy in China has a long history, beginning from the Shang Dynasty. Chinese star names later categorized in the twenty-eight mansions have been found on oracle bones unearthed at Anyang, dating back to the middle Shang Dynasty, and the mansion (xiù:宿) system's nucleus seems to have taken shape by the time of the ruler Wu Ding.

Mathematics in China emerged independently by the 11th century BC. The Chinese independently developed a real number system that includes significantly large and negative numbers, more than one numeral systems, algebra, geometry, number theory and trigonometry.

Guo Shoujing, courtesy name Ruosi (若思), was a Chinese astronomer, hydraulic engineer, mathematician, and politician who lived during the Yuan Dynasty (1271–1368). The later Johann Adam Schall von Bell (1591–1666) was so impressed with the preserved astronomical instruments of Guo that he called him "the Tycho Brahe of China." Jamal ad-Din cooperated with him.

Yuwen Huaji was a general of the Chinese Sui Dynasty who, in 618, led a coup against Emperor Yang of Sui, killing him. He subsequently declared Emperor Yang's nephew Yang Hao emperor and led Emperor Yang's elite Xiaoguo Army (驍果) north, but was then repeatedly defeated by Li Mi, Li Shentong (李神通), and finally Dou Jiande. Believing that his defeat was near and wanting to be emperor before his ultimate defeat, he poisoned Yang Hao and declared himself the emperor of a Xu state. Dou captured him in 619 and killed him.

Yuwen Shiji, courtesy name Renren, formally Duke Zong of Ying, was an official of the Sui and Tang dynasties, serving as a chancellor, as Shizhong (侍中) (625–626) and Zhongshu Ling (中書令) (626–627), during the reigns of Emperors Gaozu and Taizong of Tang. He was previously an imperial prince in the short-lived state of Xu (許), which was ruled by his brother Yuwen Huaji.

Fang Qiao (579–648), courtesy name Xuanling, better known as Fang Xuanling, posthumously known as Duke Wenzhao of Liang, was a Chinese statesman and writer who served as a chancellor under Emperor Taizong in the early Tang dynasty. He was the lead editor of the historical record Book of Jin and one of the most celebrated Tang dynasty chancellors. He and his colleague, Du Ruhui, were often described as role models for chancellors in imperial China.

The Dunhuang map or Dunhuang Star map is one of the first known graphical representations of stars from ancient Chinese astronomy, dated to the Tang Dynasty (618–907). Before this map, much of the star information mentioned in historical Chinese texts had been questioned. The map provides a graphical verification of the star observations, and are part of a series of pictures on one of the Dunhuang manuscripts. The astronomy behind the map is explained in an educational resource posted on the website of the International Dunhuang Project, where much of the research on the map has been done. The Dunhuang Star map is to date the world's oldest complete preserved star atlas.

The Huangdi Yinfujing, or Yinfujing, is a circa 8th century CE Daoist scripture associated with Chinese astrology and Neidan-style Internal alchemy. In addition, Huangdi Yinfujing is also the name of a Chinese Fengshui text on military strategy.

Wei Zhigu, formally Duke Zhong of Liang (梁忠公), was an official of the Chinese Tang dynasty and Wu Zetian's Zhou Dynasty, serving as a chancellor during the reigns of Emperor Ruizong and Emperor Xuanzong.

Li Wu (李悟), né Li Liao (李寮), formally the Prince of Jiàng (絳王), was an imperial prince of the Chinese dynasty Tang Dynasty who, after the assassination of his nephew Emperor Jingzong, was poised to take the throne, but was then himself killed in the armed conflict between the eunuchs who supported him and those who supported Emperor Jingzong's younger brother Li Han, who took the throne as Emperor Wenzong.

Shu Yuanyu was an official of the Chinese Tang Dynasty, serving briefly as a chancellor during the reign of Emperor Wenzong. During Emperor Wenzong's reign, he became involved in a major power struggle between imperial officials and eunuchs known as the Ganlu Incident, and he was killed by the eunuchs along with three other chancellors, Li Xun, Wang Ya, and Jia Su.

Li Ye, born Li Zhi, courtesy name Li Jingzhai, was a Chinese mathematician and writer who published and improved the tian yuan shu method for solving polynomial equations of one variable. Along with the 4th-century Chinese astronomer Yu Xi, Li Ye is one of the few Chinese mathematicians to propose the idea of a spherical Earth instead of a flat one before the arrival of European science in China during the 17th century.

Li Wei (李蔚), courtesy name Maoxiu (茂休), was an official of the Chinese dynasty Tang Dynasty, serving as a chancellor during the reign of Emperor Xizong.

Li Qing, known as Li Mao (李瑁) from 725 and honored title Prince of Shou (壽王) was an Imperial Prince of Chinese Tang Dynasty, he was the eighteenth son of Emperor Xuanzong and his favorite concubine Consort Wu.