Last updated January 07, 2020
This is a Chinese name; the family name is Li (originally Zhang).

Li Cunxin had a sour relationship with Li Cunxiao, another of Li Keyong's many adopted sons, and indirectly caused Li Cunxiao's defection.

Zhang Wuluo was most definitely not a Han Chinese — he could speak 4 "barbarian" languages and read 6. He may possibly be a Uyghur, as his father, carrying the Chinese name of Zhang Junzheng (張君政), had been a follower of Li Sizhong, a Uyghur who submitted to the Tang Dynasty after the collapse of the Uyghur Khaganate in 840. [2] The family moved southward in the late 840s or early 850s, settling in Heluochuan (合羅川; probably around the Juyan Lake Basin in modern Inner Mongolia). [3]

Adept at mounted archery, he first served the elderly Shatuo commander Li Guochang, [3] and in 882 followed Li Guochang's son Li Keyong on the southern campaign against the anti-government rebel leader Huang Chao. Through military merit, he rose to the position of chief director of armed forces (馬步軍都指揮使) and was adopted by Li Keyong with the new name of Li Cunxin. [2]

Li Cunxin was jealous of Li Keyong's massive wang Li Cunxiao and tried hard to impede all of Li Cunxiao's actions. In 891, when Li Cunxiao asked for permission to attack the warlord Wang Rong, Li Keyong initially agreed, [4] but changed his mind when Li Cunxin advised against it. In 892, Li Cunxin was sent with Li Cunxiao for a joint attack on Wang, but as they deeply distrusted each other, neither attacked. Li Cunxin then falsely accused Li Cunxiao of being in communications with Wang. [5] This led to Li Cunxiao's defection and eventual death.

In 897, Li Cunxin suffered a large defeat at the hands of Liu Rengong. Furious, Li Keyong almost executed him. Afterwards, Li Cunxin often used illness as an excuse to avoid battles. In 902, when Li Keyong's capital of Taiyuan was besieged by Zhu Wen's forces, Li Cunxin had proposed that they desert Taiyuan and flee to Yunzhou in the north, but Li Keyong decided against it. [7] Li Cunxin died that year at the age of 40. [2]

Due to the role he played in Li Cunxiao's death, Li Cunxin was particularly vilified in the Yuan Dynasty play "A Grieving Lady Deng Painfully Laments Cunxiao" (鄧夫人苦痛哭存孝) by Guan Hanqing, which was translated as "Death of the Winged-Tiger General" by Yang Hsien-yi and Gladys Yang in 1958. [8] (Lady Deng was the name of Li Cunxiao's wife in the play.) In this fictional play, Li Cunxiao's death was entirely brought about by Li Cunxin and Kang Junli, who had him cruelly executed behind Li Keyong's back. Influential Ming Dynasty novelist Luo Guanzhong's classic novel Romance of the End of Tang and Five Dynasties Histories (殘唐五代史演義) was also based on this account. 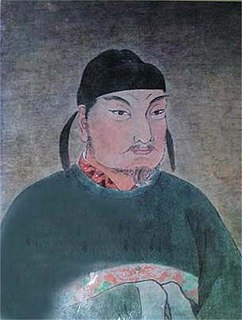 Emperor Zhaozong of Tang, né Li Jie, name later changed to Li Min and again to Li Ye, was the penultimate emperor of the Tang Dynasty of China. He reigned from 888 to 904. Zhaozong was the seventh son of Emperor Yizong of Tang and younger brother of Emperor Xizong of Tang.

Li Keyong was a Shatuo military governor (Jiedushi) during the late Tang Dynasty and was key to developing a base of power for the Shatuo in what is today Shanxi Province in China. His son, Li Cunxu would eventually become the founder of the Later Tang, arguably the first of many Conquest Dynasties in China.

Li Siyuan, also known by his temple name Mingzong (明宗), was the second emperor of imperial China's short-lived Later Tang during the Five Dynasties and Ten Kingdoms period, reigning from 926 until his death. He was an ethnic Shatuo originally named, in the Shatuo language, Miaojilie (邈佶烈).

Li Guochang, né Zhuye Chixin (朱邪赤心), courtesy name Dexing (德興), posthumously honored by Later Tang as Emperor Wenjing (文景皇帝) with the temple name of Xianzu (獻祖), was a leader of the Shatuo Turks during the waning years of the Tang Dynasty.

Zhang Jun (張濬), courtesy name Yuchuan (禹川), was an official of the Chinese dynasty Tang Dynasty, serving as a chancellor during the reigns of Emperor Xizong and Emperor Xizong's brother Emperor Zhaozong. Early in Emperor Zhaozong's reign, Zhang was a major advocate for the imperial campaign to regain power from the regional warlords, but was removed after commanding a disastrous campaign against Li Keyong and forced into retirement. Late in Emperor Zhaozong's reign, with Emperor Zhaozong physically controlled by another warlord, Zhu Quanzhong, who had designs on taking over the throne as emperor, Zhu, while formerly an ally of Zhang's, was concerned that Zhang would encourage other warlords into a coordinated campaign against Zhu to stop his takeover, and so had his ally Zhang Quanyi slaughter Zhang Jun and his household.

Li Keju was a warlord late in the Chinese dynasty Tang dynasty, who controlled Lulong Circuit from 876 to 885.

Helian Duo (赫連鐸) was an ethnically-Tuyuhun warlord in late Tang Dynasty. He had a long-running enmity with the Shatuo chieftain Li Keyong, and was killed by Li Keyong in 894.

Consort Dowager Liu was the wife of Li Keyong, the founder of the Five Dynasties and Ten Kingdoms period state Jin. However, despite this status, after Li Keyong's son Li Cunxu later defeated Jin's rival Later Liang and established Later Tang as its Emperor Zhuangzong, she was not honored as empress dowager, but only given the lesser title of consort dowager.

Zhuge Shuang (諸葛爽) was a general of the Chinese dynasty Tang Dynasty, who controlled Heyang Circuit for some time and who vacillated between allegiance to Tang and to the Qi state of the agrarian rebel Huang Chao.

Wang Rong, was a warlord in the final years of the Tang dynasty who later became the only ruler of the state of Zhao during the Five Dynasties and Ten Kingdoms period. Late in Tang, he initially tried to chart an independent course between the more powerful warlords Zhu Quanzhong and Li Keyong, but later was forced to become Zhu's vassal, although he continued to govern his domain without much interference from Zhu. After Zhu declared himself the emperor of a new dynasty of Later Liang, Wang continued to serve as a vassal and was created the Prince of Zhao. Later, though, when the Later Liang emperor tried to seize the Zhao domain by force, Wang broke away from Later Liang and realigned with Li Keyong's son and successor Li Cunxu the Prince of Jin instead. In 921, Wang was overthrown and killed in a coup led by his adoptive son Wang Deming, who subsequently took over his domain and changed back to the birth name of Zhang Wenli, before dying later in the year; Li Cunxu then defeated and killed Zhang's son and successor Zhang Chujin, incorporating Zhao into his Jin state.

Li Hanzhi (李罕之), formally the Prince of Longxi (隴西王), nickname Li Moyun (李摩雲), was a warlord of the late Tang dynasty. He was initially a follower of the major agrarian rebel Huang Chao, and later became a Tang general, mostly known for his service under Li Keyong. He was known for ferocity in carrying out raids.

Ge Congzhou (葛從周), courtesy name Tongmei (通美), formally the Prince of Chenliu (陳留王), was a general serving under Zhu Wen while Zhu Quanzhong was a warlord late in the Tang Dynasty. Ge's health problems later forced him into retirement, but he remained in honored status after Emperor Taizu established Later Liang.

Li Cunxiao (李存孝), né An Jingsi (安敬思), was an adoptive son of the late-Tang Dynasty warlord Li Keyong who contributed much to Li Keyong's campaigns, but who later rebelled against his adoptive father. He subsequently was defeated by Li Keyong and executed by dismemberment after he surrendered, although Li Keyong soon regretted his death.

Liu Rengong (劉仁恭) was a warlord late in the Chinese dynasty Tang Dynasty who controlled Lulong Circuit from 895 to 907. He was initially a Lulong officer, but later fled to Li Keyong's Hedong Circuit. After Li conquered Lulong and left him in charge, he turned against Li and became an independent warlord, although at times he and Li would still act in concert. His domain later became the basis of the Five Dynasties and Ten Kingdoms period state Yan that Liu Shouguang established. In 913, however, Li Keyong's son and successor Li Cunxu the Prince of Jin conquered Yan and captured both Liu Shouguang and Liu Rengong; he put them to death the next year.

Li Kuangwei (李匡威) was a warlord late in the Chinese dynasty Tang Dynasty, who controlled Lulong Circuit after inherited it from his father Li Quanzhong in 886, until he was overthrown by his brother Li Kuangchou in 893. After he was overthrown, he resided briefly at the domain of his ally Wang Rong the military governor of Chengde Circuit. He subsequently tried to seize control of the circuit from Wang, but was killed by Chengde soldiers faithful to Wang.

Li Kening (李克寧) was a younger brother of the late Chinese Tang Dynasty warlord Li Keyong the Prince of Jin. After Li Keyong's death, Li Kening initially served as a key advisor to Li Keyong's son and successor Li Cunxu, but soon was persuaded by his wife Lady Meng to try to take over from Li Cunxu. His plot was discovered, and Li Cunxu put him to death.

Shi Jingcun (史敬存), known as Shi Jingsi (史敬思) in Chinese historiography likely for naming taboo reasons, was a minor general in imperial China under the Shatuo military leader Li Keyong near the end of the Tang Dynasty. He sacrificed his life to help his inebriated lord escape an assassination attempt by Zhu Wen in Zhu's territory.

Li Cunjin (李存進), originally Sun Chongjin (孫重進), was a military general in imperial China's Tang Dynasty, and later the Jin territory in the ensuing Five Dynasties and Ten Kingdoms period after Tang's collapse. He served the Shatuo leaders Li Keyong — who adopted him as a son — and Li Keyong's biological son and successor Li Cunxu. He died in the battles against Zhang Chujin.