Li Nina (Chinese :李妮娜; pinyin :Lǐ Nīnà, born January 10, 1983 in Benxi, Liaoning) is a Chinese aerial skier who won silver at both the 2006 and 2010 Winter Olympics. She placed 5th at the 2002 Winter Olympics, and has won the last three World Championships in aerials.

Li Ting is a female diver from the People's Republic of China. She is a member of the Dong Chinese ethnic minority. 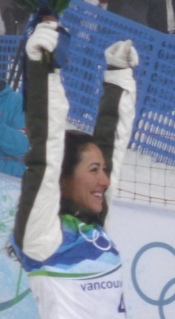 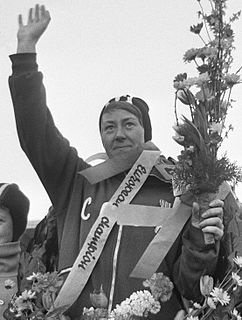 Nina Andreyevna Statkevich is a former speed skater who competed for the Soviet Union.

Han Xiaopeng is a freestyle skier who competed at the 2006 Winter Olympics in Turin, Italy, and won gold in the men's aerials event. In this discipline he also won the World Championships in 2007. Despite these great achievements, he has yet to win a World Cup competition. Han is the first Chinese male athlete to ever win a gold medal at the Winter Olympics.

Li Jiajun is a Chinese short track speed skater who has won 5 Olympic medals – two silver and three bronze. He has been a two-time Overall World Champion for 1999 and 2001.

Li Meisu is a retired Chinese shot putter who won the bronze medal at the 1988 Summer Olympics in Seoul.

Li Ching is a table tennis player from Hong Kong, China. He is best known for the joint silver medal he won for Hong Kong at the Athens Olympic in 2004.

Du Li is a female Chinese sport shooter who was a gold medalist at the 2004 Olympics and the 2008 Olympics; she has also won titles at World Cup, World Championships and the Asian Games.

Eric Bergoust is an American freestyle skier. In 1998 Bergoust participated at the 1998 Winter Olympics held in Nagano, Japan where he won a gold medal in the freestyle ski jump (aerials).

Ashley Caldwell is an American freestyle skier who has competed since 2008. Caldwell was named to the US team for the 2010 Winter Olympics in January 2010 after competing in the sport for only two seasons. The youngest in the event, she reached the finals of the Aerials. Caldwell won her first World Cup aerials event in the United States in Lake Placid, New York, in January 2011 becoming the youngest freestyle female to ever win.

Xu Mengtao is a Chinese aerial skier. She has two World Cup victories. She competed at the 2010 Winter Olympics, where she qualified eighth, and had the highest score after the first jump in the finals. However, she crashed on her second jump and ended up in sixth place.

Qi Guangpu is a Chinese aerial skier who has represented China at the 2010, 2014, and 2018 Winter Olympics. Although his performance at the Olympics is lackluster while failing to medal in any of the Olympics he has participated, his records at the FIS Freestyle World Ski Championships is much better, with 2 golds and 2 silvers from 2011 to 2017. He won a silver medal at the 2011 World in Deer Valley, USA and upgraded that to a gold in 2013 in Voss, Norway. At the 2015 World in Kreischberg, Austria he defended his world title. He followed that in 2017 with a silver. 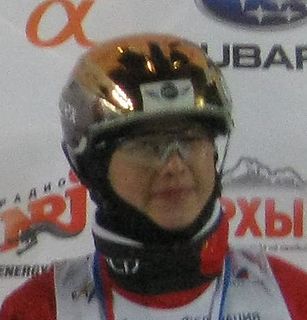