A native of Claregalway, Ó Dúgáin was a relation of Tomás Bacach Ó Dúgáin and Maolsheachlainn Ó Dúgáin, all of the same parish. His scribal work consists of songs.

Dugan or Duggan is an Irish surname derived from Ó Dubhagáinn.

Macalla is a 1985 musical album by Irish folk group Clannad. It is their ninth album and became prominent with a collaboration between Clannad's singer Moya Brennan and U2 vocalist Bono on the duet "In a Lifetime". Furthermore, it featured some internationally renowned artists such as art rock saxophone player Mel Collins, an ex-King Crimson member and famous for his solo on The Rolling Stones' "Miss You", and Anton Corbijn's photography. 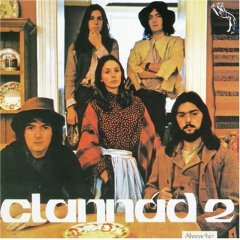 Clannad in Concert is the fourth album by Irish folk group Clannad. It is their first live album, taken from a 1978 concert while on tour in Switzerland and was released in 1979. It was during this tour that the group decided to go professional. The LP came in a gatefold cover and early copies of the Irish issue included a large poster.

Crann Úll is the fifth album by Irish folk group Clannad released in 1980. It is also the first Clannad album to feature younger sister Eithne Ní Bhraonáin. She appears as supporting vocalist on the track "Gathering Mushrooms". The name of the album translates as "Apple Tree". 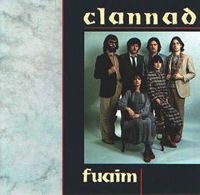 Fuaim is the sixth album by Irish folk group Clannad. It was released in 1982. It was produced by Nicky Ryan and was the last Clannad album to feature younger sister Eithne Ní Bhraonáin, later known as Enya. It is also the only Clannad album to credit her; while she performed keyboard and backing vocals on the previous album "Crann Úll", she was not credited for this. She departed, along with Nicky Ryan, shortly thereafter to begin a solo career.

Thomas Duggan Goss was an NBC and ABC radio and television commentator in Chicago and Los Angeles and a crusader against Chicago mob involvement in boxing and politics. 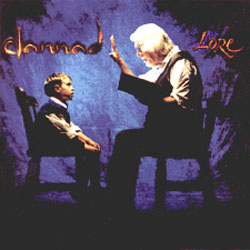 Lore is a 1996 studio album by the Irish folk group Clannad. It was re-issued in 2005 with the Cantoma mix bonus track of "Croí Cróga". Lore was greeted with great acclaim by music critics worldwide, often stating that this was one of Clannad's greatest recordings. This has the most Gaelic songs of all Clannad albums since 1982, and was nominated for a Grammy Award for Best New Age Album, the band's second nomination, although it lost to The Memory of Trees by Enya, who was once a member of Clannad and is the sister of band members Moya Brennan, Ciarán Brennan and Pól Brennan as well as niece to Noel Ó Dúgáin and Pádraig Ó Dúgáin.