Lidia Muhtarovna Yusupova (Лидия Мухтаровна Юсупова) (born September 15, 1961 in Grozny, Soviet Union) is the Coordinator of the law office of the Moscow-based human rights organization Memorial. Formerly, Yusupova was the director of the Grozny office of Memorial. Currently, Yusupova is completing a two-year law fellowship in Moscow.

Yusupova was born to Chechen father and Russian mother in the city of Grozny. She studied Russian Literature at the Karachaevo-Cherkeski Intstitute. Later she studied law at the Chechen University in the city of Grozny, and served as a professor in that field. During the First Chechen War, she witnessed the tragedy of war, and suffered the loss of several friends, neighbors, colleagues, and family members. In 2000, during the Second Chechen War, she decided to devote her life to human rights, using her legal expertise and personal experience during both wars to help others that were entangled in the bloody conflict.

Yusupova gathers testimony from victims of human rights abuses, and presses their cases with law enforcement and military agencies. Not only does she, to the extent possible, provide the victims with legal assistance, but she also informs the rest of the world on violations of human rights, committed by Russian armed forces and Chechen rebels alike. Yusupova has been described by the BBC News service as "the bravest woman in Europe", [1] and representatives of Amnesty International have similarly declared her "one of the most courageous women in Europe". [2] Both Yusupova and her organization have been nominated for the Nobel Peace Prize. [3] [4]

Yusupova has been awarded the 2004 Martin Ennals Award for Human Rights Defenders and the 2005 Professor Thorolf Rafto Memorial Prize.

The International Federation of Human Rights reported that Yusupova faced death threats for her work on October 12, 2006. [5]

The First Chechen War, also known as the First Chechen Campaign, or First Russian-Chechen war was a rebellion by the Chechen Republic of Ichkeria against the Russian Federation, fought from December 1994 to August 1996. After the initial campaign of 1994–1995, culminating in the devastating Battle of Grozny, Russian federal forces attempted to seize control of the mountainous area of Chechnya but were set back by Chechen guerrilla warfare and raids on the flatlands despite Russia's overwhelming advantages in firepower, manpower, weaponry, artillery, combat vehicles, airstrikes and air support. The first war was preceded by the Russian Intervention in Ichkeria, in which Russia tried to covertly overthrow the Ichkerian government. The resulting widespread demoralization of federal forces and the almost universal opposition of the Russian public to the conflict led Boris Yeltsin's government to declare a ceasefire with the Chechens in 1996 and sign a peace treaty a year later.

The Second Chechen War was an armed conflict in Chechnya and the border regions of the North Caucasus between the Russian Federation and the Chechen Republic of Ichkeria, fought from August 1999 to April 2009.

Anna Stepanovna Politkovskaya was a Russian journalist, writer, and human rights activist who reported on political events in Russia, in particular, the Second Chechen War (1999–2005). 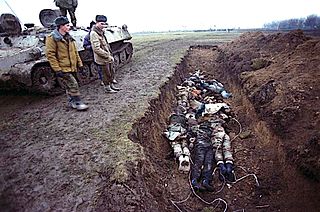 In Chechnya, mass graves containing hundreds of corpses have been uncovered since the beginning of the Chechen wars in 1994. As of June 2008, there were 57 registered locations of mass graves in Chechnya. According to Amnesty International, thousands may be buried in unmarked graves including up to 5,000 civilians who disappeared since the beginning of the Second Chechen War in 1999. In 2008, the largest mass grave found to date was uncovered in Grozny, containing some 800 bodies from the First Chechen War in 1995. Russia's general policy to the Chechen mass graves is to not exhume them.

The article details notable human rights violations committed by the warring sides during the second war in Chechnya. Both Russian officials and Chechen rebels have been regularly and repeatedly accused of committing various war crimes, including kidnapping, torture, murder, hostage taking, looting, rape, beheading and assorted other breaches of the law of war.

Russia incurred much international criticism for its conduct during the Second Chechen War, which started in 1999. The governments of the United States and other countries condemned deaths and expulsions among civilians. The United Nations Commission on Human Rights (UNHCR) passed two resolutions in 2000 and 2001 condemning human rights violations in Chechnya and requiring Russia to set up an independent national commission of inquiry to investigate the matter. However, a third resolution on these lines failed in 2004. The Council of Europe in multiple resolutions and statements between 2003 and 2007 called on Russia to cease human rights violations. The European Court of Human Rights (ECHR) between 2005 and 2007 conducted legal cases brought by Chechens against the Russian government, and in many of these cases held Russia responsible for deaths, disappearances and torture.

In the Battle of Grozny of August 1996, Chechen rebels regained and then kept control of Chechnya's capital Grozny in a surprise raid. The Russian Federation had conquered the city in a previous battle for Grozny that ended in February 1995 and subsequently posted a large garrison of federal and republican Ministry of the Interior (MVD) troops in the city.

The Novye Aldi massacre was a massacre in which Russian federal forces summarily executed dozens of people in the Novye Aldi (Aldy) suburb of Grozny, the capital of Chechnya, in the course of a "mopping-up" (zachistka) operation conducted there on February 5, 2000, soon after the end of the battle for the city. As a result of a deadly rampage by the special police forces, between 60 to 82 local civilians were killed and at least six women were raped. Numerous houses were also burned and civilian property was stolen in an organized manner.

Milana Zaydinovna Bakhaeva, better known by the pen name Milana Terloeva, is a Chechen journalist and author of the 2006 French bestseller Danser sur les ruines — Une jeunesse tchétchène. A refugee during the Second Chechen War, Milana was one of eight Chechen students at the University of Grozny selected to study abroad by the human rights organization Études Sans Frontières in 2003, and she graduated with a master's degree in journalism from the Institut d'Études Politiques de Paris in 2006. 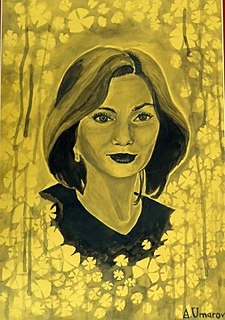 Natalya Khusainovna Estemirova was a Russian human rights activist and board member of the Russian human rights organization Memorial. Estemirova was abducted by unknown persons on 15 July 2009 around 8:30 a.m. from her home in Grozny, Chechnya, as she was working on "extremely sensitive" cases of human rights abuses in Chechnya. Two witnesses reported they saw Estemirova being pushed into a car shouting that she was being abducted. Her remains were found with bullet wounds in the head and chest area at 4:30 p.m. in woodland 100 metres (330 ft) away from the federal road "Kavkaz" near the village of Gazi-Yurt, Ingushetia. 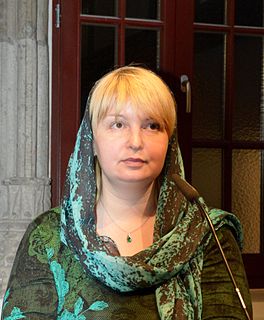 Polina Zherebtsova is a Chechen Russian documentarian, poet and author of the diaries Ant in a Glass Jar, covering her childhood, adolescence and youth that witnessed three Chechen wars. 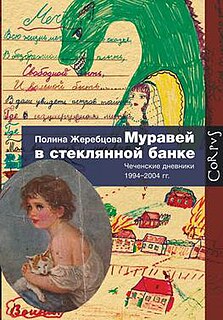 The Committee for the Prevention of Torture is a Russian non-governmental organization. Established in 2000, it investigates allegations of torture by state agents, provides victims of torture with medical psychological support, and represents them at the national level and before the European Court of Human Rights in cases where domestic remedies are ineffective. Based on its casework and research, it publishes information on systemic obstacles to effective investigation and prosecution of torture in Russia.

Alik (Umar) Lechayevich Dzhabrailov, often Alik Djabrailov, sometimes spelled Alik Dzhabrailov, sometimes occurred Umar Dzhabrailov was, together with his wife, Zarema Sadulayeva, a worker of the charity "Let's Save the Generation". The charity was located in Grozny, the Capital of Chechen Republic, and was dedicated to help children who had physical or mental trauma of war. Alik Djabrailov and Zarema Sadulayeva were kidnapped in the middle of the day in the charity office in the City of Grozny on August 10, 2009, then disappeared, then a day later found killed on the outskirts of the Grozny. The brutality of the killing of the couple of Zarema Sadulayeva and Alik Djabrailov, who married just two month before, caused international outcry among human rights, social institutions and media, was condemned by European Commission, Parliamentary Assembly of the Council of Europe, German Federal Foreign Office; Bernard Kouchner of French Ministry of Europe and Foreign Affairs said the human rights defenders killed systematically in Russia, and Russian government obliged to stop the crimes, punish culprits.

Maria Kirbasova, was a Kalmyk human rights activist who founded the Committee of Soldiers' Mothers of Russia. In 1995 they were awarded Thorolf Rafto Memorial Prize and the Sean MacBride Peace Prize and in 1996 they were given the Right Livelihood Award.