Lifuka Island Airport( IATA : HPA, ICAO : NFTL), also known as Salote Pilolevu Airport or Haʻapai Airport, is an airport on Lifuka in Tonga. The airport is located 5 km (3.1 mi) north of the capital Panga, and is only served domestically, roughly 40 minutes by flight to Tongatapu and 30 minutes to Vava'u. Taxis serve the airport, and services include a cafe inside the terminal. [2]

One of the airport's most unique features is the dirt road intersecting the runway. Gates staffed by airport employees are used to prevent access during aircraft operation, the rest of the airport otherwise secured with barbed wire fencing.

There is no aviation fuel or refuelling service for aircraft available at the airport. [3]

Royal Tongan Airlines commenced operations to Ha'apai in the mid 1980s with CASA 212 aircraft. Around this time the airfield was improved, allowing Twin Otter operations to commence.

HS 748 operations followed this before the Short 360 began services on the route, flying to Ha'apai until the airline's collapse. [4]

Following the collapse of Royal Tongan Airlines, Peau Vava'u was formed on the 27th of May 2004 as Tonga's first domestic-only airline, and remained the only airline in Tonga for a short period of time as a one-airline policy was imposed. This policy was revoked in 2005, the second domestic operating license being taken up by Airlines Tonga later that year. [5]

Peau Vava'u operated flights to Ha'apai with leased DC-3s in June 2004, with Convair CV-580 flights commencing in May 2005 subleased from Reef Air and Air Chathams. [6]

Air Fiji formed Airlines Tonga in December 2005 as a joint venture with Tongan travel agency Teta Tours. The airline was created to provide domestic services to Tonga, Ha'apai among the destinations.

Also in 2006, Peau Vava'u cut all flights after damage to its office in November. The airline never resumed flights. [5] This made Airlines Tonga the only domestic carrier in Tonga until its collapse in August 2008.

On the 14th of April 2008, Chathams Pacific began five weekly flights to Ha'apai from Tongatapu. Services were inaugurated after the failure of Airlines Tonga and Peau Vava'u in the preceding years to fill the gap they left. This made the airline the only operator for some time.

Ha'apai flights were once again provided by Convair CV-580s, but also a Fairchild Metroliner and a Beech Queen Air.

With the announcement of Chinese funding for a new airline to compete with Chathams Pacific in early 2012, CEO Craig Emeny announced a withdrawal of flights from the 2nd of March 2013. [7]

Real Tonga supposedly would commence operation with two leased Harbin Y-12s on 4 March, [8] however due to delays in aircraft arrivals, Air Chathams was chartered to fly services for the week following the end of operations. [7]

Real Tonga would later receive a their own Y-12 and a Xian MA60 amid controversy over the type's safety. [8] The MA60 was grounded in February 2015 due to these concerns. [9] The airline has repetitively grounded the type since, but as of 2020, it's reported to still be operating. [10]

The airport's deteriorating runway surface has been reported as the cause of multiple incidents of foreign object debris damages to aircraft operating to the airfield in 2015. [9] 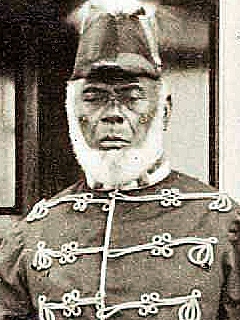 George Tupou I, King of Tonga was originally known as Tāufaʻāhau I, He adopted the name Siaosi, the Tongan version of George, after King George III of the United Kingdom, when he was baptized in 1831. His nickname was Lopa-ukamea, meaning iron cable.

Haʻapai is a group of islands, islets, reefs, and shoals in the central part of the Kingdom of Tonga. It has a combined land area of 109.30 square kilometres (42.20 sq mi). The Tongatapu island group lies to its south, and the Vavaʻu group lies to its north. Seventeen of the Haʻapai islands are inhabited. Their combined population is 6,125. The Ha‘apai group’s highest point is Kao, which is almost 1,050 metres (3,440 ft) above sea level. 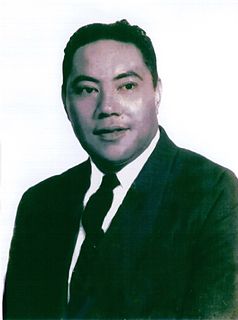 Airlines Tonga was an airline based in Nukuʻalofa, Tonga. It operated services within Tonga and flights are operated on its behalf by Air Fiji. 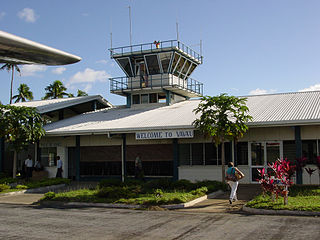 Mata’uvave was the name given to a dynasty of male chiefs presiding over the Ha’apai Island Group of Tonga from the 15th century until the mid-1980s. The first Mata’uvave was appointed to a gubernatorial role by Tu’i Tonga Kau’ulufonua I to increase the Tu’i Tonga’s control over Ha’apai. The first few generations of the title subdued several islands in northern Ha’apai and undertook several major building projects, most notably pigeon mounds, the Huluipaongo burial mound, and the Velata fortress. Within a few generations the Mata’uvave attempted to rule independently, antagonizing the authority of chiefs in Tongatapu and causing a confrontation that the Mata’uvave eventually lost. They were relegated to a line of nobility called ‘eiki si’i, or “a minor chief without importance.” 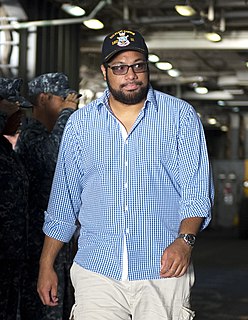 Cyclone Ian was a powerful tropical cyclone that formed on January 2, 2014. Areas affected by the tropical cyclone include Fiji and Tonga. In Tonga, Ian caused destruction in the Ha'apai islands, as well as one fatality.

Real Tonga, stylised as "REALtonga", is an airline that operates domestic flights within Tonga. It commenced operations in March 2013, becoming the twelfth airline to operate domestic flights in Tonga since air services began. In 2020 the airline ceased all operations.