Samuel John "Lightnin'" Hopkins (March 15, 1912 – January 30, 1982) [1] was an American country blues singer, songwriter, guitarist and occasional pianist, from Centerville, Texas. Rolling Stone magazine ranked him number 71 on its list of the 100 greatest guitarists of all time. [2]

The musicologist Robert "Mack" McCormick opined that Hopkins is "the embodiment of the jazz-and-poetry spirit, representing its ancient form in the single creator whose words and music are one act". [3]

Hopkins was born in Centerville, Texas, [4] and as a child was immersed in the sounds of the blues. He developed a deep appreciation for this music at the age of 8, when he met Blind Lemon Jefferson at a church picnic in Buffalo, Texas. [5] That day, Hopkins felt the blues was "in him".[ citation needed ] He went on to learn from his older (distant) cousin, the country blues singer Alger "Texas" Alexander. [5] (Hopkins had another cousin, the Texas electric blues guitarist Frankie Lee Sims, with whom he later recorded. [6] ) Hopkins began accompanying Jefferson on guitar at informal church gatherings. Jefferson reputedly never let anyone play with him except young Hopkins, and Hopkins learned much from Jefferson at these gatherings.

In the mid-1930s, Hopkins was sent to Houston County Prison Farm; the offense for which he was imprisoned is unknown. [5] In the late 1930s, he moved to Houston with Alexander in an unsuccessful attempt to break into the music scene there. By the early 1940s, he was back in Centerville, working as a farm hand.

Hopkins took a second shot at Houston in 1946. While singing on Dowling Street in Houston's Third Ward (which would become his home base), he was discovered by Lola Anne Cullum of Aladdin Records, based in Los Angeles. [5] She convinced Hopkins to travel to Los Angeles, where he accompanied the pianist Wilson Smith. The duo recorded twelve tracks in their first sessions in 1946. An Aladdin executive decided the pair needed more dynamism in their names and dubbed Hopkins "Lightnin'" and Wilson "Thunder".

Hopkins recorded more sides for Aladdin in 1947. He returned to Houston and began recording for Gold Star Records. In the late 1940s and 1950s he rarely performed outside Texas, only occasionally traveling to the Midwest and the East for recording sessions and concert appearances. It has been estimated that he recorded between eight hundred and a thousand songs in his career. He performed regularly at nightclubs in and around Houston, particularly on Dowling Street, where he had been discovered by Aladdin. He recorded the hit records "T-Model Blues" and "Tim Moore's Farm" at SugarHill Recording Studios in Houston. By the mid- to late 1950s, his prodigious output of high-quality recordings had gained him a following among African Americans and blues aficionados.[ citation needed ]

In 1959, the blues researcher Mack McCormick contacted Hopkins, hoping to bring him to the attention of a broader musical audience engaged in the folk revival. [5] McCormack presented Hopkins to integrated audiences first in Houston and then in California. He made his debut at Carnegie Hall on October 14, 1960, alongside Joan Baez and Pete Seeger, performing the spiritual "Mary Don't You Weep". In 1960, he signed with Tradition Records. The recordings which followed included his song "Mojo Hand" in 1960.

In 1968, Hopkins recorded the album Free Form Patterns, backed by the rhythm section of the psychedelic rock band 13th Floor Elevators. Through the 1960s and into the 1970s, he released one or sometimes two albums a year and toured, playing at major folk music festivals and at folk clubs and on college campuses in the U.S. and internationally. He toured extensively in the United States [3] and played a six-city tour of Japan in 1978.

Hopkins was Houston's poet-in-residence for 35 years. He recorded more albums than any other bluesman. [3]

Hopkins died of esophageal cancer in Houston on January 30, 1982, at the age of 69. His obituary in the New York Times described him as "one of the great country blues singers and perhaps the greatest single influence on rock guitar players." [7]

His Gibson J-160e "hollowbox" is on display at the Rock Hall of Fame in Cleveland, and his Guild Starfire at the National Museum of African American History and Culture in DC, both on loan from the Joe Kessler collection.

Much of Hopkins's music follows the standard 12-bar blues template, but his phrasing was free and loose. Many of his songs were in the talking blues style, but he was a powerful and confident singer.[ citation needed ] Lyrically, his songs expressed the problems of life in the segregated South, bad luck in love and other subjects common in the blues idiom. He dealt with these subjects with humor and good nature. Many of his songs are filled with double entendres, and he was known for his humorous introductions to songs.[ citation needed ]

Some of his songs were of warning and sour prediction, such as "Fast Life Woman":

You may see a fast life woman sittin' round a whiskey joint, Yes, you know, she'll be sittin' there smilin', 'Cause she knows some man gonna buy her half a pint, Take it easy, fast life woman, 'cause you ain't gon' live always... [3]

A statue of Hopkins sits in Crockett, Texas. [8]

Hopkins is mentioned in Erykah Badu's 2010 "Window Seat": "I don't want to time-travel no more, I want to be here. On this porch I'm rockin', back and forth like Lightnin' Hopkins."

R.E.M. included the song "Lightnin' Hopkins" on their 1987 album Document .

Walter Brown "Brownie" McGhee was an American folk music and Piedmont blues singer and guitarist, best known for his collaboration with the harmonica player Sonny Terry. 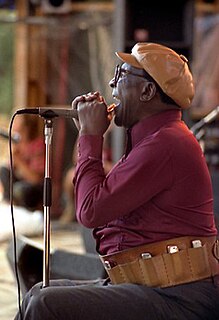 Saunders Teddell, or Saunders Terrell, known as Sonny Terry, was an American Piedmont blues and folk musician, who was known for his energetic blues harmonica style, which frequently included vocal whoops and hollers and occasionally imitations of trains and fox hunts.

Arhoolie Records is an American small independent record label run by Chris Strachwitz and is based in El Cerrito, California, United States The label was founded by Strachwitz in 1960 as a way for him to record and produce music by previously obscure "down-home blues" artists such as Lightnin' Hopkins, Snooks Eaglin, and Bill Gaither. Arhoolie still publishes blues and folk music, Tejano music including Lydia Mendoza, Los Alegres de Terán, Flaco Jiménez, regional Mexican music, cajun, zydeco, and bluegrass.

Chris Strachwitz is a German-born American record label executive and record producer. He is the founder and president of Arhoolie Records, which he established in 1960 and which became one of the leading labels recording and issuing blues, Cajun, norteño and other forms of roots music from the US and elsewhere in the world.

Samuel Barclay Charters IV was an American music historian, writer, record producer, musician, and poet. He was a widely published author on the subjects of blues and jazz. He also wrote fiction. 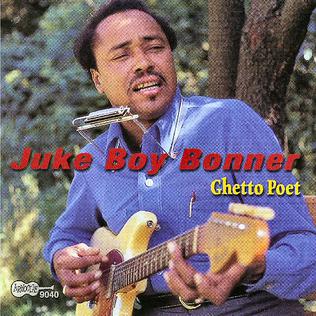 Weldon H. Philip Bonner, better known as Juke Boy Bonner was an American blues singer, harmonica player, and guitarist. He was influenced by Lightnin' Hopkins, Jimmy Reed, and Slim Harpo. He accompanied himself on guitar, harmonica, and drums in songs such as "Going Back to the Country", "Life Is a Nightmare", and "Struggle Here in Houston".

Harrison Demotra Nelson, Jr., known as Peppermint Harris, was an American rhythm and blues and jump blues singer and guitarist.

Buster Pickens was an American blues pianist. Pickens is best known for his work accompanying Alger "Texas" Alexander and Lightnin' Hopkins. He also recorded a solo album in 1960.

Luke "Long Gone" Miles was an American Texas blues and electric blues singer and songwriter. He was a protégé of Lightnin' Hopkins and variously recorded or performed with Hopkins, Sonny Terry, Brownie McGhee and Willie Chambers. Miles is best known for his 1964 album Country Born, issued by World Pacific Records.

Lightnin' is an album by blues musician Lightnin' Hopkins recorded in 1960 and released on the Bluesville label the following year.

Last Night Blues is an album by blues musician Lightnin' Hopkins with Sonny Terry recorded in 1960 and released on the Bluesville label the following year.

Lightnin' and Co. is an album by blues musician Lightnin' Hopkins recorded in Texas in 1962 and released on the Bluesville label. The album was reissued as a double LP compilation with additional tracks from the sessions as How Many More Years I Got in 1981 on Fantasy Records.

Lightnin' Sam Hopkins is an album by blues musician Lightnin' Hopkins recorded in California in late 1961 and Texas in early 1962 and released on the Arhoolie label.

Walkin' This Road by Myself is an album by blues musician Lightnin' Hopkins recorded in Texas and released on the Bluesville label.

Lightnin'! is an album by blues musician Lightnin' Hopkins recorded in California in 1969, and originally released on the Poppy label as a double LP. 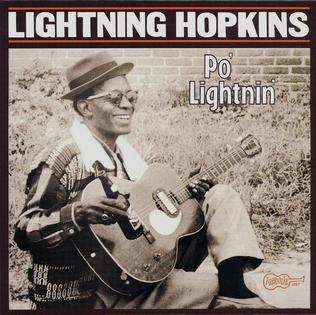 Po' Lightnin' is an album by blues musician Lightnin' Hopkins recorded in California in 1969 and originally released on the Arhoolie label in 1983.

Early Recordings Vol. 2 is an album by blues musician Lightnin' Hopkins featuring tracks recorded at Gold Star Recording Studios between 1946 and 1950, thirteen of which were originally released as 10-inch 78rpm records on the Gold Star and Dart labels, along with three others that were previously unissued. Arhoolie reissued The Gold Star Sessions on two CDs through Smithsonian Folkways in 1990.