Lin lost his mom and dad at the ages of 8 and 10 respectively. Due to the Sino-Japanese War, his childhood was spent in the forest fleeing the Japanese army. [2] He began his theological education at Alliance Bible Institute (now Alliance Bible Seminary in Hong Kong) at Wuzhou, Guangxi in 1945. [3] Two years later, he was enrolled to Leung Kwong Baptist Seminary (now the Hong Kong Baptist Theological Seminary) and, at the age of 23, he started studying church music at China Baptist Theological Seminary, Shanghai (Chinese :上海中華浸會神學院), supervised under Ma Geshun (Chinese :馬革順; 1914–2015), a professor at the Shanghai Conservatory of Music and one of the most significant choral conductors in twentieth-century China. [4] He then studied theology and sacred music at Nanjing Theological Seminary in 1952 for two years.

He was a pastor of Jingling Church, Shanghai (Chinese :上海景靈堂; formerly known as Jinglin Church [Chinese :景林堂]) from 1980 until his retirement in 2002. [2]

As one of the four editors of the Chinese New Hymnal, [1] some of his works were compiled to this hymnal, which is still widely used in the Three-Self churches in China. One of his most famous hymns, Winter is Past (Chinese: 與主同去歌), was co-written with the Chinese theologian Wang Weifan. [3]

The China Christian Council was founded in 1980 as an umbrella organization for all Protestant churches in the People's Republic of China with Bishop K. H. Ting as its president. It works to provide theological education and the publication of Bibles, hymnals, and other religious literature. It encourages the exchange of information among local churches in evangelism, pastoral work and administration. It has formulated a church order for local churches, and seeks to continue to develop friendly relations with churches overseas.

The Today's Chinese Version (TCV) is a recent translation of the Bible into modern Chinese by the United Bible Societies. The New Testament was first published in 1975, and the entire Bible was published in 1979. The Bible uses simple, easy to read Chinese. 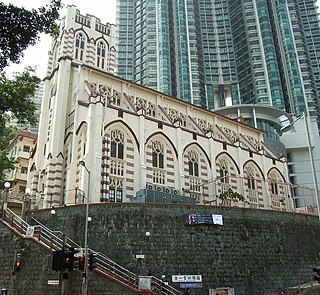 The Lutheran Church—Hong Kong Synod is a confessional Lutheran (信義宗) church body in Hong Kong. The LCHKS has nearly 40 congregations. The LCHKS grew from the China mission of The Lutheran Church–Missouri Synod (LCMS), which was established in the early 1900s. Many of the LCHKS parishes and schools are listed below.

The Baptist Convention of Hong Kong is a Baptist Christian denomination in Hong Kong. It is affiliated with the Baptist World Alliance. The headquarters is in Mong Kok.

The Chinese Baptist Convention is a Baptist Christian denomination in Taiwan and the territories administered by the Republic of China. 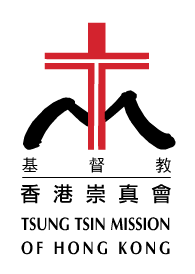 The Tsung Tsin Mission of Hong Kong or TTMHK is one of the eight Lutheran bodies in Hong Kong. It currently has approximately 10,600 members.

The Beizhengjie Christ Church is a 20th-century typical gothic church. It is located in the Huangxing North Road of Changsha, Hunan province, China.

Lin Tzay-peir is a Taiwanese actor and television presenter. He won Best Actor at the 1985 Golden Bell Awards.

Lai Enjue (Chinese:赖恩爵, 1795-1848), also known as Jian Ting (简廷) was a late Qing military general. He was from Dapeng Fortress, Xin'an County, Guangdong, and has ancestry from Zhijin, Guangdong. Lai fought the British in the Battle of Kowloon during the First Opium War in 1839 and was given the title of Baturu and an equivalent rank of Lieutenant General. On 25 December 1843, he was appointed as the Admiral (水师提督) of the Guangdong Navy. He served in this post until 1848 when he died of illness.

Hong Kong-Mainland China relations refer to the relationship between Mainland China and Hong Kong. According to the 1997 Sino-British Joint Declaration, the United Kingdom handed control of Hong Kong over to the People's Republic of China, making it a special administrative region. In principle, Hong Kong became an autonomous administrative division based on the Hong Kong Basic Law.