Last updated November 09, 2020
In this Chinese name, the family name is Lin .

Lin Tie (Chinese : 林 铁 ; November 1904 – August 17, 1989) was a Communist revolutionary leader and politician of the People's Republic of China (PRC). He served as the first Communist Party Chief and the second Governor of Hebei province of the PRC, but was purged in 1966 at the beginning of the Cultural Revolution. [1]

In Spring 1928 Lin was dispatched by the CPC to Paris, France, where he enrolled at the University of Paris. He continued to participate in revolutionary and union activities, and was soon deported by the French government. He left for Belgium but was again deported by that country. In January 1932 he was sent to the Soviet Union to study at the International Lenin School and later the Communist University of the Toilers of the East, two Communist cadre training schools in Moscow. He returned to China in late 1935. [1]

During the Second Sino-Japanese War Lin Tie stayed in the Beijing-Tianjin area and helped establish the Hebei Communist Party Committee in 1937. During the subsequent Chinese Civil War Lin was the Party Chief of Central Hebei and the Political Commissar of the Central Hebei Military Region. [1]

After the Communists defeated the Kuomintang in the Pingjin Campaign, the Hebei Provincial Committee of the Communist Party was established on 12 July 1949, and Lin Tie was appointed the provincial party chief. [2] The People's Republic of China was soon established on 1 October. Lin later also assumed the post of Governor, the number two post in the government hierarchy, [1] but Liu Zihou took over that position in April 1958. [3] Liu was a proponent of class struggle and was praised by Chairman Mao Zedong. [4] Lin Tie, on the other hand, was a proponent of modernization. In 1958, Lin successfully lobbied the central government to approve moving the Hebei provincial capital from the more agrarian Baoding to metropolitan Tianjin (now a direct-controlled municipality separate from Hebei). Lin wanted to utilize Tianjin's industry and educational resources to help modernize the rural areas, but his plans were derailed by Mao Zedong's disastrous Great Leap Forward. [3]

In May 1966, Mao Zedong purged Politburo member, Beijing party chief Peng Zhen and started the decade-long Cultural Revolution. [5] As Lin Tie was associated with the political network of Peng Zhen, [6] Governor Liu Zihou took the opportunity to make a bid for the top office of Hebei. Liu courted Li Xuefeng, party chief of North China which includes Hebei province, and denounced Lin Tie. Lin was stripped of all his positions and imprisoned in a military compound. Liu subsequently persecuted many war heroes including his own former associates, resulting in at least 33 deaths. [5]

By January 1967, the capital of Hebei had been moved back to Baoding from Tianjin. When Liu Zihou arrived in Baoding, he was attacked and detained by rebel Red Guards, which included supporters of Lin Tie. On January 29, the red guards of the August First faction paraded Liu on a truck for five hours, which was witnessed by a million people. On February 11, the 69th Army of the PLA commanded by General Xie Zhenhua jailed 1000 members of the August First red guards, and restored Liu Zihou to power. [7]

After the end of the Cultural Revolution in 1976 and the rise to power of reformer Deng Xiaoping, Lin Tie was rehabilitated. In 1982 he was elected a member of the Central Advisory Commission. On 17 September 1989 Lin Tie died in Beijing, aged 84. [1]

Lin was a member of the eighth Central Committee of the Communist Party of China. [1] 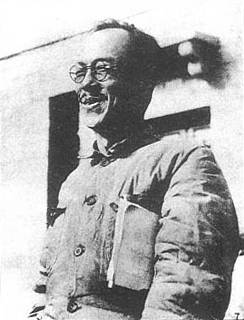 Kang Sheng was a Communist Party of China (CPC) official best known for having overseen the work of the CPC's internal security and intelligence apparatus during the early 1940s and again at the height of the Cultural Revolution in the late 1960s and early 1970s. A member of the CPC from the early 1920s, he spent time in Moscow during the early 1930s, where he learned the methods of the NKVD and became a supporter of Wang Ming for leadership of the CPC. After returning to China in the late 1930s, Kang Sheng switched his allegiance to Mao Zedong and became a close associate of Mao during the Anti-Japanese War, the Chinese Civil War and after. He remained at or near the pinnacle of power in the People's Republic of China from its establishment in 1949 until his death in 1975. After the death of Chairman Mao and the subsequent arrest of the Gang of Four, Kang Sheng was accused of sharing responsibility with the Gang for the excesses of the Cultural Revolution and in 1980 he was expelled posthumously from the CPC.

Chen Boda, was a Chinese Communist journalist, professor and political theorist who rose to power as the chief interpreter of Maoism in the first 20 years of the People's Republic of China. Chen became a close associate of Mao Zedong in Yan'an, during the late 1930s, drafting speeches and theoretical essays and directing propaganda.

Luo Ruiqing, formerly romanized as Lo Jui-ch'ing, was a Chinese army officer and politician, general of the People's Liberation Army. He created the People's Republic of China's security and police apparatus after the Communist victory in the civil war in his capacity as the first Minister of Public Security from 1949 to 1959, and then served as Chief of Joint Staff from 1959 to 1965, achieving military victory in the Sino-Indian War.

The 7th Central Committee of the Communist Party of China was in session from 1945 to 1956. It was a product of the convening of the 7th National Congress of the Communist Party of China. It held six plenary sessions in this 11 year period. It began in June 1945, before the end of the Second Sino-Japanese War, and the resumption of the Chinese Civil War. This committee would be succeeded by the 8th Central Committee.

The politics of Hebei Province in the People's Republic of China is structured in a dual party-government system like all other governing institutions in mainland China.

Wu De, born Li Chunhua (李春华), was a Chinese Communist revolutionary and politician of the People's Republic of China. He served in provincial-level leadership positions in Pingyuan Province, Tianjin municipality, Jilin Province, and Beijing municipality, and was a member of the Politburo of the Communist Party of China from 1973 to 1980. After the Cultural Revolution, Wu was a key supporter of Hua Guofeng and was forced out of politics after Deng Xiaoping ousted Hua from his leadership position.

Lin Boqu was a Chinese politician and poet. An early supporter of Sun Yat-sen and member of the Tongmenghui, as well as a later participant in the Nanchang Uprising and the Long March, Lin came to be seen as one of the elder statesmen of the Communist Party of China. 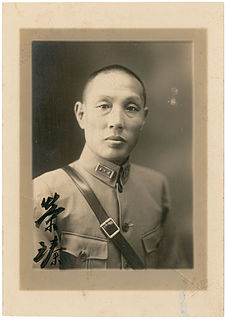 Rong Zhen (1891–1960) was a military commander in the Republic of China. He belonged to the Fengtian clique, but eventually participated in the Wang Jingwei regime. He was born in Zaoqiang, Zhili (Hebei).

Li Xuefeng was a Chinese Communist politician. He occupied several prominent regional offices prior to the founding of the People's Republic in 1949. In 1960 he became the first political commissar of the Beijing Military Region. He took over the Beijing party organization as its First Secretary after the purge of Peng Zhen in May 1966, and was sent to take the reins of Hebei's Revolutionary Committee between 1968 and 1971. However, his support for Chen Boda during the 1971 Lushan Conference led him to be branded as a supporter of Lin Biao; he was purged and sent into internal exile in Anhui province for eight years. He was politically rehabilitated in 1982, and went on to serve in several advisory positions in the party.

Liu Zihou was a Communist revolutionary leader and politician of the People's Republic of China. He served as Governor of Hubei and Hebei provinces, and as the top leader of Hebei during the Cultural Revolution, but was ousted from his positions after he opposed the reforms of Deng Xiaoping. He was a protégé of Li Xiannian, one of China's top leaders. 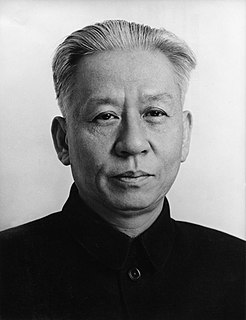 Liu Shaoqi was a Chinese revolutionary, politician, and theorist. He was Chairman of the NPC Standing Committee from 1954 to 1959, First Vice Chairman of the Communist Party of China from 1956 to 1966 and Chairman (President) of the People's Republic of China, China's de jure head of state, from 1959 to 1968, during which he implemented policies of economic reconstruction in China.

Lin Qiang is a Chinese politician who spent most of his career in Northeast China's Liaoning province. In September 2014, he was put under investigation by the Communist Party's anti-corruption agency; at the time of the investigation, he was serving as the Mayor of Tieling.

Liu Geping was a Chinese communist revolutionary and politician of Hui Muslim heritage. He is best known as the founding Chairman of the Ningxia Hui Autonomous Region and later for seizing power in Shanxi during the Cultural Revolution, where he made himself the top leader of the province.

Chen Bojun (陈伯钧 or 陈国懋; pinyin:Chén Bójūn or Chén Guómào; November 26, 1910 – February 6, 1974), was a general of the People's Liberation Army from the Sichuan Province, Dachuan District.

He Jian was a Chinese Nationalist (KMT) general and politician in the Republic of China. He was governor of Hunan province between 1929 and 1937, and Interior Minister from 1937 to 1939. He was best known for fighting the Communists, and he once ordered his subordinates to execute Yang Kaihui and Wu Ruolan.

Huang Jing, born Yu Qiwei, was a Chinese Communist revolutionary and politician who served as Mayor and Communist Party Chief of Tianjin municipality, Minister of the First Ministry of Machine Building, and Chairman of the National Technological Commission. He was an ex-husband of Jiang Qing, who later married Mao Zedong, and the father of Yu Qiangsheng, a top Chinese intelligence officer who defected to the United States in 1985, and Yu Zhengsheng, the fourth-ranked member of the 18th Politburo Standing Committee.

Paul G. Pickowicz. is an American historian of modern China and Distinguished Professor of History and Chinese Studies at University of California at San Diego. He specialises in the history of China in the 20th century.