Dropping out of school at the age of 15 to join the pop-rock music band Lambretta, she experienced much success at a young age. After releasing three albums with Lambretta, she decided in Autumn 2005 to go solo. [1]

Her first solo single, "Oh Father", was released in September 2006 and her debut album, Oh My God!, a couple of months later. "Oh Father" was nominated for a Grammis award. [2] Musicwise it remained silent around Sundblad until the second part of 2009 when the new single "2 All My Girls" was released and a second album announced [3] for 24 March 2010.

She is also featured on the Reflections album by Apocalyptica, for which she sings the vocals to "Faraway Vol.2". Sundblad works currently with House music artist Rasmus Faber; she sang for him on the single "Everything Is Alright", [4] which was released on 22 November 2008 and on his second single "Always", which was released on 6 April 2009. Sundblad also features on Rasmus Faber's debut album Where We Belong. [5]

Linda Sundblad participated in Melodifestivalen 2011, the Swedish selection for the Eurovision Song Contest 2011. She competed in the third semi-final on 19 February 2011 in Cloetta Center, Linköping with the song "Lucky You" which finished 6th and did not qualify for the final.

Sundblad has worked since 2005 as a model, presenting L'Oréal and Munthe plus Simonsen. [6]

Since 8 November 2006 Sunblad has worked as a radio announcer at Sveriges Radio [7] where she moderated the programme P3 Star.

Susanne Elisabeth "Susie" Päivärinta is a Swedish singer and artist of Finnish ancestry. She scored a number of hits in the 1980s and early 1990s with the duo Lili & Susie, with her sister Lili Päivärinta. Their most famous was their 1987 song "Oh Mama" which spent six weeks in the top five of the Swedish singles chart. They also competed at Melodifestivalen 1989 and in the Eurovision Song Contest with "Okey okey". In 1990, their song What's the Colour of Love also hit the top 5. The duo reunited in 2008 and competed at Melodifestivalen 2009 with the song Show Me Heaven, which peaked at number 6 in the Swedish singles chart. Päivärinta wrote C'est la vie! It's Alright!, performed by Lucia Perez, and Diamonds, performed by Melissa, which were both featured at Eurovision Song Contest 2011. Päivärinta helped write Baby Doll by the bad Top Cats, which was selected for Melodifestivalen 2012 and reached 20 on the Swedish national radio chart.

Lidköping is a locality and the seat of Lidköping Municipality in Västra Götaland County, Sweden. It had 25,644 inhabitants in 2010. 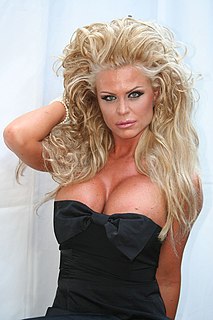 Linda Maria Elisabeth Thelenius is a Swedish glamour model and singer. Thelenius became known in Sweden when she was a housemate on Big Brother 2003; she has since released a book, been a party leader for the Unique Party and participated in several other reality shows. She has been married to Basic Element singer Peter Thelenius since 2010.

Lillasyster is a Swedish Rock band formed in Gothenburg in 2006. They released their debut album, Hjärndöd musik för en hjärndöd generation in May 2007.

Petra Maria Mede is a Swedish comedian, dancer, actress and television presenter. She was born in Stockholm, and grew up in Gothenburg. Mede is known for her several roles in comic shows and as a television presenter. She is best known outside of Sweden for hosting the Eurovision Song Contest in 2013, co-hosting the Eurovision Song Contest's Greatest Hits in 2015, as well as the 2016 edition.

Anna Anka, is a Swedish-American model, actress, and author. She was married to Canadian singer Paul Anka. Anka is featured in the Swedish reality show Svenska Hollywoodfruar. 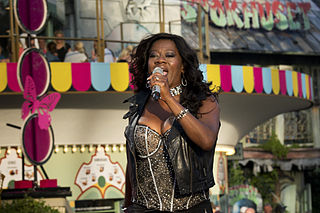 Hans Oskar "Kihlen" Linnros is a Swedish musician. He was part of the alternative hip hop band Snook alongside Daniel Adams-Ray, before going solo and releasing his solo studio debut album Vilja bli that reached number 2 on the Swedish Albums Chart. The track "Från och med Du" from the album reached the top of Sverigetopplistan, the official Swedish Singles Chart.

Sebastian Carlsén is a Swedish professional footballer who plays as a midfielder for Danish 2nd Division club Hellerup IK.

Hulda Maria Charlotte Kulle is a Swedish actress. The daughter of Jarl Kulle and Louise Hermelin earlier was married to Lars-Erik Berenett.

Manifest is a 2010 Linda Sundblad album.