Lindsey McKeon is an American actress. She is known for her roles as Marah Lewis on Guiding Light and Taylor James on One Tree Hill . She previously starred on Saved by the Bell: The New Class as Katie Peterson from 1996–2000.

In the late 1990s, McKeon was involved with Scott Ashley Sterling (son of Donald Sterling [1] ). The day she broke up with Sterling, a fight ensued between him and his friend Philip Scheid, who Sterling thought was trying to steal Mckeon from him, resulting in Scheid being shot by Sterling with a shotgun. [2]

She is married to longtime boyfriend Brant Hively, with the couple having wed in a small intimate outdoor ceremony. [3]

McKeon starred on Saved by the Bell: The New Class , playing Katie Peterson, debuting with the series' fourth season in 1996 and continuing until the series ended in 2000. She joined the CBS daytime soap opera Guiding Light in November 2001, playing the character of Marah Lewis until 2004. [4] In a June 2002 Victoria Advocate article, McKeon said of her character, Marah, "She could definitely make some smarter choices where men are concerned, but couldn't we all?" and "I just hope she's learned as much as I have after going through all of this." [5]

McKeon has appeared as a series regular in Fox's The Opposite Sex and had a recurring role on Boy Meets World . [6] Additional television credits include the lead in Class Warfare , a USA Network movie-of-the-week, and episodes of It's Always Sunny in Philadelphia , Grounded for Life , Maybe It's Me , Special Unit 2 , 3rd Rock from the Sun , House , and Odd Man Out .

Most recently, she has made guest appearances on the shows Supernatural and Veronica Mars , and on One Tree Hill as Taylor James, the sister of Haley James Scott played by fellow Guiding Light alumnus Bethany Joy Galeotti. Her film credits include Shredder and Class Warfare .

Guiding Light is an American radio and television soap opera. It is listed in Guinness World Records as the second longest-running drama in television in American history. Guiding Light aired on CBS for 57 years between June 30, 1952, and September 18, 2009, overlapping a 19-year broadcast on radio between January 25, 1937, and June 29, 1956. With 72 years of radio and television runs, Guiding Light is the longest running soap opera, ahead of General Hospital, and is the fifth-longest running program in all of broadcast history; only the American country music radio program Grand Ole Opry, the BBC religious program The Daily Service (1928), the CBS religious program Music and the Spoken Word (1929), and the Norwegian children's radio program Lørdagsbarnetimen (1924–2010) have been on the air longer.

James E. Reilly was an American soap opera writer. He was the head writer of NBC's Days of Our Lives and creator/head writer of Passions. Reilly won a Daytime Emmy Award for Outstanding Drama Series Writing as co-head writer for Guiding Light in 1993.

Beverlee McKinsey was an American actress. She is best known for her roles on daytime serials, including Iris Cory Carrington on Another World and the spin-off series Texas from 1972 to 1981 and Alexandra Spaulding on Guiding Light from 1984 to 1992.

Lauralee Kristen Bell is an American soap opera actress. She was born in Chicago, Illinois, and attended The Latin School of Chicago.

Nancy Justine McKeon is an American actress. She is known for her roles as Jo Polniaczek on the NBC sitcom The Facts of Life and Jinny Exstead on The Division.

The 30th Daytime Emmy Awards ceremony, commemorating excellence in American daytime programming from 2002, was held on May 16, 2003 at Radio City Music Hall in New York City. Hosted by Wayne Brady, it was televised in the United States by ABC.

The 29th Daytime Emmy Awards ceremony, commemorating excellence in American daytime programming from 2001, was held on May 17, 2002 at the theater at Madison Square Garden in New York City. Hosted by Bob Barker, it was televised in the United States by CBS. It was also the first time the ceremonies were simulcast in Spanish.

Kimberly Jean Brown is an American actress, best known to audiences for her portrayal of the teen witch Marnie Piper in the Halloweentown films, in which she starred alongside Debbie Reynolds. Before being cast as Marnie, Brown found notoriety for her role as Marah Lewis on Guiding Light, the third actress to take on the role, and as Annie Wheaton in the Rose Red miniseries, an original miniseries written by Stephen King. She also starred in the acclamed movie Tumbleweeds.

Reva Shayne is a fictional character from Guiding Light, played by four-time Daytime Emmy Award winner Kim Zimmer from November 28, 1983, to July 23, 1990, and April 14, 1995, until the show's final episode on September 18, 2009. Zimmer has become such a celebrated performer that she is often considered to be an "icon" in the daytime drama industry.

Ashley Peldon is an American actress, starting as a child actress, transitioning to adult roles, then primarily voice acting after 2008. She has many credits for screams provided for sound effects.

Daniel Thomas Cosgrove is an American actor. He is known for his roles as Scott Chandler on All My Children, Matt Durning on Beverly Hills, 90210, Bill Lewis on Guiding Light, Christopher Hughes II on As the World Turns and Aiden Jennings on Days of Our Lives.

Saved by the Bell: The New Class is an American teen sitcom television series, and spinoff from Saved by the Bell. The New Class premiered on September 11, 1993. The series ran for seven seasons on NBC as a part of the network's TNBC Saturday morning line-up, airing its final episode on January 8, 2000. It was the fourth and, at seven seasons, the longest-running incarnation of the franchise. 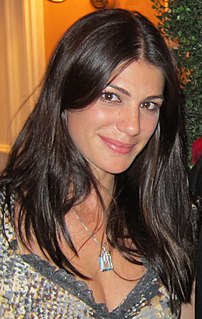 Genevieve Nicole Padalecki is an American actress. She appeared in the television series Wildfire as Kris Furillo and had a recurring role in Supernatural as the demon Ruby. 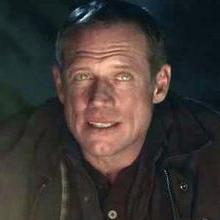 Azazel is a villain on The CW Television Network's drama and horror television series Supernatural. He serves as the main antagonist during the first two seasons. A demon, he feeds his blood to infants so that they will grow up to develop demonic abilities. His goal of using one such child to release Lucifer is not revealed until much later in the series. Azazel is referred to by nicknames such as "The Yellow-Eyed Demon," or "Yellow Eyes" throughout the first two seasons, his true name not being revealed until the third season. Due to the character's demonic nature of taking different hosts, Azazel has been played by numerous actors but Fredric Lehne is the main default portrayer. All the incarnations have maintained his sadistic sense of humor and irony. Azazel's popularity and importance towards the franchise even led him to be the main antagonist and the analogue to Lucifer in the anime adaptation, as the "Yellow-Eyed Demon," in reference to the nickname he had in the original first two seasons. 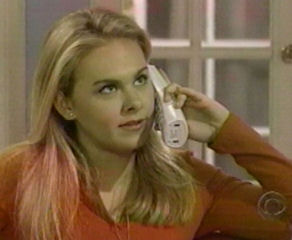 Marah Lewis is a fictional character on the CBS daytime soap opera, Guiding Light. The character is the daughter of the popular supercouple, Josh Lewis and Reva Shayne. Marah was born on-screen in June 1987, but this was subsequently revised to 1985 and 1983 when she turned three years old in 1988 and sixteen years old in 1999 respectively.

Ruby is a demon on The CW Television Network's Supernatural portrayed mainly by actresses Katie Cassidy and Genevieve Cortese. Created by the writers to expand on the characterization of demons within the series, she first appears in the third season, wherein she assists series protagonists Sam and Dean Winchester in fighting her fellow demons. By the fourth season, she has won Sam's trust and begins training him to kill demons with his psychic powers, though Dean remains fearful of ulterior motives. The character is killed at the end of the fourth season. In the fifteenth season, Ruby returns through flashbacks and a visit to the Empty, the angels' and demons' afterlife.

The YoungStar Awards, presented by The Hollywood Reporter, honored young American actors and actresses from ages 6–18 in their work in film, television, stage and music. Winners were chosen via a poll of 3,500 entertainment industry insiders who read The Hollywood Reporter. The awards ceremony was held from 1995 until 2000; there was no ceremony in 1996.

Jordan Lane Price is an American actress, singer and model. She is best known for her portrayal of Celia Fitzgerald in The Online Network reboot of soap opera drama series All My Children.