Line 3 of the Guangzhou Metro is a 65.43-kilometer (40.66 mi) rapid transit line connecting Panyu Square to Tianhe Coach Terminal. The entire line, including all track and stations, is located in tunnels. [5] Its 57.93 km (36.00 mi) main branch, excluding the 7.5 km (4.7 mi) branch between Tianhe Coach Terminal and Tiyu Xilu, is the longest continuous subway tunnel in the world, and the longest rail tunnel of any kind (surpassing the Gotthard Base Tunnel in Switzerland).

Line 3 is split into two sections, Shiqiao line (main line, from Panyu Square to Tianhe Coach Terminal) and Airport line (northern branch, Tiyu Xilu to Airport North), and are branded with the colour orange. The line is extremely congested, with numerous sections officially operating over 100% capacity. [6]

Line 3 was built in four main stages, opened over a five-year period: [7]

There are 4 types of train services offered on the metro line 3:

A further extension east of Haibang Station to Hai'ou Island and eventually across the Pearl River to Dongguan was proposed in 2007. In 2017, the Guangzhou Municipal Land Planning Commission approved the planning for Line 3 to be extended to Hai'ou Island. [18] However, the extension eastward beyond Panyu Square station was approved by National Development and Reform Commission to only reach Haibang station as part of Guangzhou's (2015-2025) subway expansion plan in March 2018. [19] It was revealed that the extension to Hai'ou Island is reserved for future planning. [20] The extension is 9.58km long as will add four new stations and connect Line 3 to Line 4. [21] Guangzhou Metro will order 10 more six car trains to serve the extension. Construction of this extension started November 19, 2018. [22] 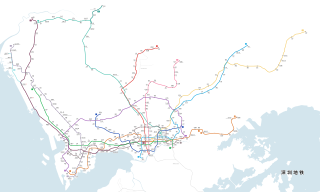 The Shenzhen Metro is the rapid transit system for the city of Shenzhen in Guangdong province, China. Extensions opened on 28 October 2020 put the network at 411 kilometres of trackage, operating on 11 lines with 283 stations. Shenzhen Metro is the 4th longest metro system in China and 4th longest in the world as of that date despite having only opened on 28 December 2004. By 2030 the network is planned to comprise 8 express and 24 non-express lines totaling 1142 kilometers of trackage. 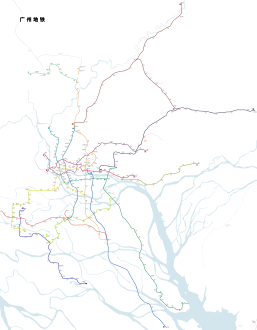 Urban rail transit in the People's Republic of China encompasses a broad range of urban and suburban electric passenger rail mass transit systems including subway, light rail, tram and maglev. Some classifications also include non-rail bus rapid transport. China has the world's longest urban rail transit system that was more than 7,500 km long, as of 2020. 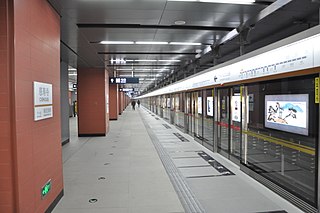 Line 6 of the Beijing Subway is a rapid transit rail line in Beijing. The line runs from Jin'anqiao in Shijingshan District to Lucheng in Tongzhou District. It serves important residential areas such as Changying, Chaoqing, and Dingfuzhuang, in addition to important commercial and business areas such as Financial Street, Beijing CBD and the sub-administrative center in Tongzhou District. Like Line 7, Line 6 provides relief to the parallel Line 1, which is the second most used subway line in Beijing, after Line 10. Line 6 is the second longest subway line in Beijing. A complete journey from end to end takes about an hour and 25 minutes on a local train and express trains reducing end to end travel time by 7 minutes. 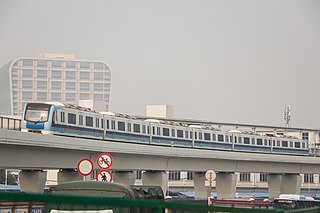 Line 5 of the Guangzhou Metro runs from Liwan District to Huangpu District. It starts at Jiaokou running 31.9 km (19.8 mi) in a wide "∩" shape and ends at Wenchong. Like line 4 and 6 it's equipped with linear induction motor technology. Line 5's color is red. Huangpu Line began operation on 28 December 2009, from Jiaokou to Wenchong. As of May 2017, Line 5 carries an average of 1.05 million passengers per day and is extremely congested throughout the day, operating at over 100% capacity during rush hours. The opening of Phase I of Line 13 further increased traffic demand on the west end of Line 5 and pushing congestion to over 130% capacity. Prompting the Guangzhou Metro to limit passenger traffic at a number of subway stations on Line 5. In the future Line 13 Phase II will provide relief for Line 5. 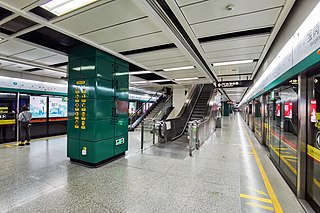 Line 6 of the Guangzhou Metro runs from Liwan District to Huangpu District. It starts at Xunfenggang and ends at Xiangxue, interchanging with Line 5 at Tanwei and Ouzhuang; Line 1 at Huangsha and Dongshankou; Line 8 at Cultural Park; Line 2 at Haizhu Square; Line 21 at Suyuan; Line 3 at Yantang and Tianhe Coach Terminal. The total length is 41.9 km (26.0 mi) with 32 stations. Line 6 serves densely populated areas including residential communities in Jinshazhou, the pedestrian street in Beijing Lu and wholesale markets in Shahe. Nevertheless, Line 6, which runs four-car trains, has long had a questionable train capacity. The phase one section between Xunfenggang and Changban began to provide service from 28 December 2013 with the exception of Yide Lu and Shahe stations. Yide Lu opened over a year later on 28 January 2015. The second phase of Line 6 from Changban to Xiangxue has been in operation since 28 December 2016. Like Lines 4 and 5, Line 6 is equipped with linear induction motor technology. Line 6's color is maroon 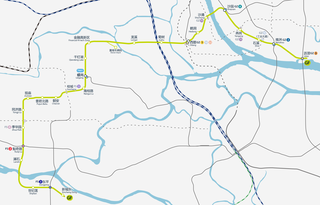 The Foshan Metro is the rapid transit system of the city of Foshan in Guangdong Province of China. It is operated by the state-owned Foshan Railway Investment Construction Group and partly by Guangzhou Metro Corporation and is the tenth metro system to be built in mainland China. Construction began in 2002 and the first line opened on 3 November 2010. The metro system has two new lines and one extension under construction.

Line 7 of the Guangzhou Metro runs across Panyu District. Line 7's color is light green. Line 7 is envisioned as tangential line that runs across southeast Guangzhou and Foshan, allowing for orbital traffic between the suburbs of Shunde, Panyu and Huangpu to avoid the crowded city center stations. The first phase opened on December 28, 2016 and starts at Guangzhou South Railway Station and ends at Higher Education Mega Center South. It has interchanges with Line 2 at Guangzhou South Railway Station and Shibi, Line 3 at Hanxi Changlong, and Line 4 at Higher Education Mega Center South and a total length is 18.6 km (11.6 mi) with 10 stations. The plan for west extension of the first phase from Guangzhou South Railway Station to Meidi Dadao in Shunde District, Foshan was approved in October, 2015. The construction of the west extension to Shunde began in June 2016. The west extension is expected to be operational in 2021. The Northern extension to Shuxi will start construction in 2018. The extension will add 22 km (14 mi) of line with 11 additional stations and will open in 2022.

Shenzhen Metro Line 9 opened on 28 October 2016. The line runs East–West from Qianwan to Wenjin. It has 32 stations, including 10 transfer stations and is 36.18 km (22.48 mi) long, running through the city’s districts of Nanshan, Futian and Luohu. Line 9's color is grey.

Line 21 of the Guangzhou Metro is a rapid transit rail line in Guangzhou. 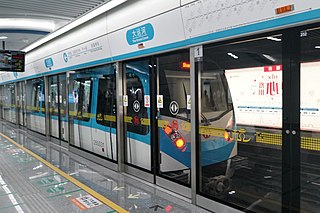 Line 5 of the Hangzhou Metro is a subway line in Hangzhou. The line is colored cyan on system maps.

Line 22 of Guangzhou Metro is a rapid transit express line under construction in Guangzhou. It will run in a south-north direction, connecting Wanqingsha in Nansha, Panyu Square and Guangzhou South in Panyu, Xilang and Bai'etan in Liwan. 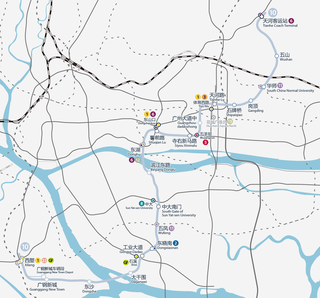