Linghu Defen (Chinese :令狐德棻; pinyin :Línghú Défēn) (582–666), formally Duke Xian of Pengyang (彭陽憲公), was Chinese historian and politician. He was an official of the Chinese dynasties Sui Dynasty and Tang Dynasty. During Tang, he was a major proponent for the compilation of the histories of Sui and its predecessor Northern Zhou and was eventually put in charge of compiling Northern Zhou's official history Book of Zhou , which was completed in 636.

Linghu Defen was born in 582, during the reign of Emperor Wen of Sui. His ancestors had been from an aristocratic clan of Dunhuang, the Linghu clan of Dunhuang, but had later relocated to Yi Province (宜州, roughly modern Tongchuan, Shaanxi). His father Linghu Xi (令狐熙) served as an official during Emperor Wen's reign but died in anger after being imprisoned due to false accusations of corruption. Late in the reign of Emperor Wen's son Emperor Yang, Linghu Defen was made the magistrate of Yaocheng County (藥城, in modern Bozhou, Anhui), but as by that time the Sui realm was had been thrown into a state of confusion due to agrarian rebellions, Linghu never took office. In 617, after the general Li Yuan the Duke of Tang rose in rebellion against Emperor Yang's rule, Li Yuan's cousin Li Shentong (李神通) rose as well and made Linghu a member of his staff. In late 617, after Li Yuan captured the capital Chang'an and declared Emperor Yang's grandson Yang You the Prince of Dai emperor (as Emperor Gong), retaining power as regent, he invited Linghu to serve as a secretary on his staff.

In 618, after Li Yuan received news that Emperor Yang had been killed in a coup at Jiangdu (江都, in modern Yangzhou, Jiangsu), he had Yang You yield the throne to him, establishing Tang Dynasty as its Emperor Gaozu. He made Linghu Defen an imperial attendant. In 622, Emperor Gaozu made Linghu Mishu Cheng (秘書丞), the secretary general of the Palace Library, and had him participate on the compilation of the Yiwen Leiju , with the chancellor Chen Shuda.

In 632, Linghu was made the deputy minister of rites (禮部侍郎), but continued to serve as an imperial historian. He was also created the Baron of Pengyang.

In 636, the Book of Zhou was completed, and Linghu was awarded silk.

In 637, another work by Linghu, the New Rites (新禮), was completed, and his title was promoted to Viscount of Pengyang. Also that year, another project that Linghu participated in, the Records of Clans (氏族志), was completed as well, and he was awarded silk again.

In 644, Linghu was recalled to civil service and made the prefect of Ya Prefecture (雅州, roughly modern Ya'an, Sichuan), but was later removed from office due to his acts there. Soon, however, when Fang was put in charge of compiling the history of Jin Dynasty (266–420) ( Book of Jin ), Linghu was made the lead editor on the project, which involved 118 editors, and the other editors largely followed Linghu's lead. After the work was completed in 648, Linghu was made Mishu Jian (秘書監), the head of the archival bureau.

Emperor Taizong died in 639 and was succeeded by his son Li Zhi the Crown Prince (as Emperor Gaozong). In 640, Emperor Gaozong put Linghu Defen in charge of editing the laws, and made him the deputy minister of rites again, as well as an imperial scholar at Hongwen Pavilion (弘文館). He was soon made the minister of worship (太常卿, Taichang Qing) and continued to serve as imperial scholar as well.

In 643, Linghu was made Guozi Jijiu (國子祭酒), the principal of the imperial university. As Linghu had compiled the records of Emperor Taizong's reign after 639, he was awarded silk and made an imperial scholar at Chongxian Pavilion (崇賢館). He was later put in charge of compiling the records of Emperor Gaozong's reign as well, and his title was promoted to Duke of Pengyang. In 662, he requested retirement and was allowed to retire with the honorific title of Jinzi Guanglu Daifu (金紫光祿大夫). He died in 666. It was said that in his late years he was particularly diligent in writing, and whenever there were major compilation projects, he would participate.

Emperor Gaozu of Tang, born Li Yuan, courtesy name Shude, was the founder of the Tang dynasty of China, and the first emperor of this dynasty from 618 to 626. Under the Sui dynasty, Li Yuan was the governor in the area of modern-day Shanxi, and was based in Taiyuan.

Li Jing, courtesy name Yaoshi, posthumously known as Duke Jingwu of Wei, was a Chinese general who lived in the early Tang dynasty and was most active during the reign of Emperor Taizong. In 630, Li Jing defeated the Göktürks, led by Jiali Khan, with just 3,000 cavalry soldiers in a surprise attack, allowing the Tang Empire to subjugate the Göktürks and reduce them to the status of a vassal under the Tang Empire. Li Jing and Li Shiji are considered the two most prominent early Tang generals.

Wei Zheng (580–643), courtesy name Xuancheng, posthumously known as Duke Wenzhen of Zheng, was a Chinese politician and historian. He served as a chancellor of the Tang dynasty for about 13 years during the reign of Emperor Taizong. He was also the lead editor of the official history of the Sui dynasty, the Book of Sui, which was composed in 636.

Feng Lun (568–627), courtesy name Deyi, better known as Feng Deyi, formally Duke Miao of Mi, was an official of the Sui and Tang dynasties who served as a chancellor during the reigns of Emperor Gaozu of Tang and Emperor Taizong of Tang. He was praised for his quick thinking but criticized by historians for his being overly attentive to the emperors' desires.

The Book of Zhou records the official history of the Chinese/Xianbei ruled Western Wei and Northern Zhou dynasties, and ranks among the official Twenty-Four Histories of imperial China. Compiled by the Tang Dynasty historian Linghu Defen, the work was completed in 636 CE and consists of 50 chapters, some of which have been lost and replaced from other sources.

The Book of Chen or Chen Shu was the official history of the Chen dynasty, one of the Southern Dynasties of China. The Book of Chen is part of the official Twenty-Four Histories of imperial China. It was compiled by the Tang dynasty historian Yao Silian and completed in 636 AD. The Chen Shu is a biographical history book with thirty-six volumes, recording the historical facts of 33 years from the accession of Chen Baxian to the last emperor Chen Shubao.

Pei Ju (547-627), birth name Pei Shiju, courtesy name Hongda, formally Duke Jing of Anyi, was a Chinese cartographer, diplomat, politician, and writer who lived in the Sui and Tang dynasties, briefly serving as a chancellor during the reign of Emperor Gaozu of Tang. He was praised by traditional Chinese historians for his ability and lack of corruption, but blamed for flattering Emperor Yang of Sui and practically directly contributing to Sui's downfall by encouraging many external military campaigns that drained Sui's resources. Modern historians have questioned these assessments: Arthur F. Wright labelled the latter judgement in the Zizhi tongjian a "particularly blatant piece of editorializing" and "absurd ... beyond doubt". 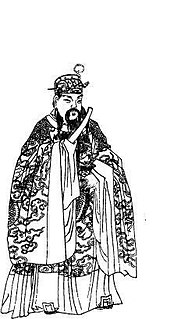 Xiao Yu (574–647), courtesy name Shiwen, posthumously known as Duke Zhenbian of Song, was an imperial prince of the Western Liang dynasty who later became an official under the Sui and Tang dynasties. He served as a chancellor during the reigns of the emperors Gaozu and Taizong in the early Tang dynasty.

Li Daozong (603?-656?), courtesy name Chengfan (承範), was an imperial prince of the Chinese dynasty Tang Dynasty. He was a cousin of Emperor Taizong, and in Emperor Taizong's reign commanded forces in campaigns against Eastern Tujue, Tuyuhun, Goguryeo, and Xueyantuo. In 653, during the reign of Emperor Taizong's son Emperor Gaozong, Li Daozong offended Emperor Gaozong's uncle, the powerful chancellor Zhangsun Wuji, and Zhangsun exiled him to Xiang Prefecture, on accusation that he associated with the treasonous Fang Yi'ai (房遺愛). Li Daozong died on the way to exile.

Fang Qiao, courtesy name Xuanling, better known as Fang Xuanling, posthumously known as Duke Wenzhao of Liang, was a Chinese statesman and writer who served as a chancellor under Emperor Taizong in the early Tang dynasty. He was the lead editor of the historical record Book of Jin and one of the most celebrated Tang dynasty chancellors. He and his colleague, Du Ruhui, were often described as role models for chancellors in imperial China.

Wen Dalin (575–637), courtesy name Yanbo, better known as Wen Yanbo, posthumously known as Duke Gong of Yu, was a Chinese official who lived in the early Tang dynasty. He was a key advisor to the Tang dynasty's founding emperor, Emperor Gaozu, and served as a chancellor during the reign of Gaozu's successor, Emperor Taizong. He was captured by the Göktürks and lived among them for years. After he was freed, he drew on his experiences to provide advice to Emperor Taizong on the Tang Empire's policies towards the Göktürks.

Gao Jian, courtesy name Shilian, better known as Gao Shilian, formally Duke Wenxian of Shen (申文獻公), was a chancellor of the Tang dynasty. He was the uncle of Empress Zhangsun, Emperor Taizong's wife, and a trusted advisor to Emperor Taizong.

Cen Wenben, courtesy name Jingren, posthumously known as Viscount Xian of Jiangling, was a Chinese official who served as a chancellor during the reign of Emperor Taizong in the Tang dynasty. He was an assistant editor of the Book of Zhou, the official history of the Northern Zhou dynasty.

Wang Gui (571–639), courtesy name Shujie, posthumously known as Duke Yi of Yongning, was a Chinese official who served as a chancellor during the reign of Emperor Taizong in the Tang dynasty. He had previously served Li Shimin's elder brother, Li Jiancheng, with whom Li Shimin was locked in an intense rivalry during the reign of their father, Emperor Gaozu, but after Li Shimin killed Li Jiancheng and then took the throne, he knew that Wang was faithful to Li Jiancheng and was capable, and therefore retained him, eventually making him chancellor. Wang was known for his honest and blunt criticism of the emperor, and for that was honored by Taizong, who appreciated such criticism.

Xu Jingzong, courtesy name Yanzu, posthumously known as Duke Gong of Gaoyang, was a Chinese cartographer, historian, and politician who served as a chancellor in the Tang dynasty. Allied with Emperor Gaozong's wife, Empress Wu, Xu Jingzong was exceedingly powerful and effective throughout most of Gaozong's reign, by order of Empress Wu, he played a major role in the eliminations of the opposition chancellors her, between years 657 to 659 and 665.

Dou Dexuan, formally Baron Gong of Julu (鉅鹿恭男), was an official of the Chinese Tang dynasty, serving as chancellor during the reign of Emperor Gaozong of Tang.

Yao Silian, courtesy name Jianzhi (簡之), formally Baron Kang of Fengcheng (豐成康男), was an official of the Chinese dynasties Sui Dynasty and Tang Dynasty and was the lead author of the Book of Liang and Book of Chen, official histories of Liang Dynasty and Chen Dynasty, which his father Yao Cha (姚察), a Chen official, had begun but did not finish.

In Chinese history, a Taishang Huang or Taishang Huangdi is an honorific and institution of retired emperorship. The former emperor had, at least in name, abdicated in favor of someone else. Although technically no longer the reigning sovereign, there are instances where the retired emperor continued to exert considerable power, if not more than the reigning emperor.