Linköping (Swedish:  [ˈlɪ̂nːˌɕøːpɪŋ] ( listen )) is a city in southern Sweden, with 161,499 inhabitants as of 2019. [2] It is the 5th largest city in Sweden. It is the seat of Linköping Municipality and the capital of Östergötland County. Linköping is also the episcopal see of the Diocese of Linköping (Church of Sweden) and is well known for its cathedral. Linköping is the center of an old cultural region and celebrated its 700th anniversary in 1987. Dominating the city's skyline from afar is the steeple of the cathedral, Domkyrka.

Nowadays, Linköping is known for its university and its high-technology industry. Linköping wants to create a sustainable development of the city and therefore plans to become a carbon-neutral community by 2025. Located on the Östergötland Plain, Linköping is closely linked to Norrköping, roughly 40 kilometres (25 mi) to the east, near the sea.

The city is possibly named after the Lionga ting assembly which according to Medieval Scandinavian laws was the most important thing in Östergötland. Exact location of the Lionga ting is not known, but it was along the Eriksgata. The term "-köping" means there was a market there.

Historically, Linköping is famed for being an early diocese, second in Sweden (within its pre-1658 boundaries) only to Skara. The diocese is first mentioned in 1104 in the so-called "List of Florence" (Lionga. Kaupinga). The monastery of Vreta Kloster near Roxen north of Linköping was established in 1128, and the oldest parts of the cathedral are also from the 12th century (although it has been changed many times since then, the eye-catching tower with copper roofing being a 19th-century product). On several occasions attempts to achieve a separate Swedish archdiocese were based in Linköping, although, when they finally were successful in 1164, Uppsala was chosen instead.

Religious centers tend to become educational centers, and Linköping was no exception. A cathedral school can be traced from 1266. In 1627 the current Linköping cathedral school was established, making it the third oldest gymnasium in Sweden.

Also, Linköping was the site for the final settlement of the dispute between king Sigismund III Vasa and his uncle Duke Charles, the latter prevailing in the battle of Stångebro (today a sports field near central Linköping) on 25 September 1598. This ultimately led to the rise to the throne of Charles (de facto at the 1600 Riksdag of the Estates meeting in Linköping and formally four years later) and the end of the short-lived Swedish-Polish personal union, as well as the execution of five of Charles's political opponents on the main square of Linköping on 20 March 1600.

Linköping was a small town until 1937, when the Saab aircraft industry was formed, starting a period of rapid expansion. Linköping University was established in the 1960s. Today the city is a center of high-technology and software industry.

Linköping has a humid continental climate (Dfb), though with maritime influences, retaining the large differences between seasons but being comparatively mild when measured against other areas of the world on similar latitudes. Linköping tends to be slightly cooler in summer than nearby areas in the Mälar valley, but still is the weather station in Sweden among the officially listed for monthly statistics, that has come the closest to a subtropical month, with July 1914 having a mean temperature of 21.8 °C (71.2 °F), with the subtropical border being at 22 °C (72 °F) for the warmest month. [3] Normally summer highs average in the low 20s and winter temperatures commonly hover just above the freezing point during the day, then falls below it at night.

Linköping offers a wealth of leisure activities to people of all ages. Residents and visitors are able to enjoy art, theatre, history, concerts, markets, festivals and sporting events.

Special sights of interests are: the locks of Berg on the Göta Canal, the locks of the Kinda Canal, Gamla Linköping, Valla skogen and Valla fritidsområde (Old Linköping, Valla Wood, and the Valla recreational area), Flygvapen museum (the Air Force Museum), Linköping's domkyrka (the Cathedral), Slotts- och domkyrkomuseet (the Castle and Cathedral Museum) and Östergötlands Länsmuseum (the Östergötland County Museum). Konsthallen Passagen is an art gallery located in the main square.

Tornby, to the north of the city centre, is a vast shopping area with huge retail outlets and immense parking lots.

The city and its environs offer all sorts of green landscapes to see and experience. Two examples are a park named after the group responsible for it, Trädgårdsföreningen (The Garden Society), and the Tinnerö area with its oak woodland. Local bodies of water include the lakes Roxen, Rängen and Järnlunden, the River Stångån/Kinda Canal and the Göta Canal with the Berg locks. These areas can be accessed by foot, bicycle, or boat.

The area around the main square was re-planned in the 1960s, and many old houses were destroyed. Some, however, were moved to Gamla Linköping (Old Linköping), in the city's western part, neighbouring the university's main campus. It is a living museum environment and a popular site with both residents and tourists.

NärCon, the largest anime and gaming convention in the Nordic countries, is held in Linköping.

A panorama view of Linköping, with Domkyrka church as the highest building of the whole city

Teams from Linköping are prominent in floorball, volleyball (Linköpings VC) and ice hockey (Linköpings HC (see above), or "Cluben" as some fans refer to it). The hockey team allied itself with Linköping's women's football team and created Linköpings FC, which plays in the highest division. The team won the Swedish Cup in 2006 and 2014. The world's largest floorball club Linköping Innebandy resides in the indoor sports arena in the city centre. The city continues to lack a first-class men's team in football with several teams competing in the lower leagues.

Other sports clubs include:

General elections were held in Sweden on 14 September 2014 to elect the Riksdag, all 21 county councils and 290 municipal assemblies.

The Swedish Air Force Museum is located near the town.

One of the biggest employers in Linköping is Saab which among other products manufactures the SAAB Gripen fighter jet and where the SAAB 340 twin-engine commuter turboprop was produced. [ citation needed ] The city also has a strong presence in information technology with the headquarters of IFS AB, Sectra AB and Cambio Healthcare Systems AB, as well as the presence of Motorola, Ericsson, Infor, and many others. Toyota Industries Sweden AB has a presence in Linköping, as one of its subsidiaries, BT Industries, is located in nearby Mjölby.

The city is situated south of lake Roxen (which is part of the historically important water paths Motala ström and the Göta Canal) where the E4, Sweden's highway backbone, crosses the river Stångån (and Kinda kanal). It is situated on the main southern railway line connecting Stockholm with Malmö and Danish capital Copenhagen. Linköping/Saab Airport offers daily connections to Amsterdam.

In 2019, the city started experimenting with two autonomous buses that run along a 2 km route around the university campus. [10]

Roxen is a medium-sized lake in south-central Sweden, east of Lake Vättern, part of the waterpath Motala ström and the Göta Canal. South of Lake Roxen is the city Linköping.

Uppsala is the county seat of Uppsala County and the fourth-largest city in Sweden, after Stockholm, Gothenburg, and Malmö. It had 168,096 inhabitants in 2017.

Kinda Municipality is a municipality in Östergötland County, southeast Sweden. The municipal seat is located in the town Kisa, with some 4,000 inhabitants.

The Institute of Technology at Linköping University, or Tekniska högskolan vid Linköpings universitet, is the faculty of science and engineering of Linköping University, located in Linköping and Norrköping in Sweden. Since its start in 1969 LiTH has had close ties with the Swedish transport and electronics industry in general and with Ericsson and SAAB in particular. The faculty has 1,400 staff members out of whom 125 are professors and 470 are lecturers with a PhD. The total number of students exceeds 12,000, with more than half being in post graduate programs. 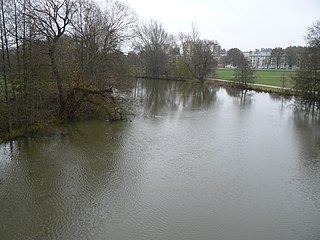 Stångån is a small river in southern Sweden, 185 km long and with a drainage basin of 2440 km2. It flows from the highlands of eastern Småland in the south to lake Roxen in the north. At the outlet near Linköping, the average discharge is 15 m3 per second. 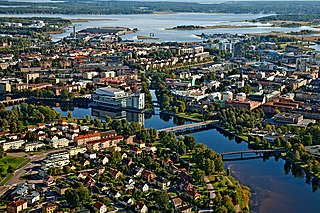 Trollhättan is a city and the seat of Trollhättan Municipality, Västra Götaland County, Sweden, with 59,058 inhabitants in 2019. It is located 75 km north of Sweden's second-largest city, Gothenburg.

Söderköping is a locality and the seat of Söderköping Municipality, Östergötland County, Sweden with 6,992 inhabitants in 2010. Söderköping is, despite its small population, for historical reasons normally still referred to as a city. Statistics Sweden, however, only counts localities with more than 10,000 inhabitants as cities. Söderköping is about 15 km southeast of the city of Norrköping. 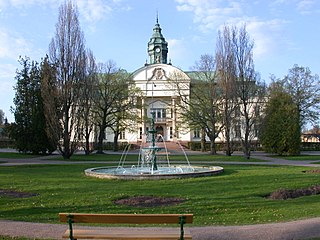 Linköping Cathedral is a church in the Swedish city of Linköping, the episcopal seat of the Diocese of Linköping in the Church of Sweden. It is situated opposite Linköping Castle.

Borensberg is a locality situated in Motala Municipality, Östergötland County, Sweden with 2,886 inhabitants in 2010. It is located 15 km east of Motala next to the Göta kanal and lake Boren, and has some factories including the plastic sheet manufacturer Arla Plast.

Magnus Vasa, prince of Sweden, Duke of Östergötland from 1555. Magnus was the third son of King Gustav Vasa. His mother was queen Margareta Leijonhufvud.

Valla Wood is a nature reserve in the municipality of Linköping, in the county of Östergötland, Sweden. It is the forested area nearest the city centre. Because the main campus of the University of Linköping lies on the other side of it, many students and workers cycle back and forth daily on the small road through it. Smaller paths and woodland trails are used by people jogging, walking, birdwatching, and orienteering.

Hackefors is a district in southeastern Linköping in Östergötland. It is located east of Stångån in Landeryd parish. Hackefors consists largely of residential buildings. There are also jogging tracks in Hackefors, Åbysäcken, of 2 km, 2.9 km, 5 km and 6.4 km. The Hackefors area was originally a place separate from Linköping, where over the years many renowned companies have been located, such as Malte Månson, Data-Saab and Ericsson. Hackefors had around 300 inhabitants in 1965. Since 1970 Hackefors has grown together with Linköping. 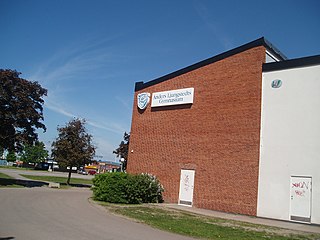 Kallerstad is a district in Linköping, Sweden, with mostly industrial, commercial and office areas. The district includes Kallerstad, Mörtlösa and Torvinge industrial areas. In 2009, fewer than a hundred people lived in the area. The district is east of Tornby, on the north side of the rail line, and crossed by Kallerstad trail, which is part of the city's outer ring road. About 60 companies have offices in the area. These include Tekniska Verken, Schenker, Urban Partners, Veolia Transport AB and CLM Environmental Engineering.

Tannefors is a district in Linköping, Sweden. It lies just east of the city center, opposite Stångån. The district's eastern parts are dominated by Saab AB, surrounding industries and Linköping Airport. In Tannefors there is a hold point for trains on the Tjust line and Stångådal line. There is a local football team called Tannefors IF. The schools Kungsbergsskolan and Tanneforsskolan are located here.