listen )) is a district located in the South Central Portugal, the district capital is the city of Lisbon, also the national capital. From its creation until 1926, it included the area of the current Setúbal District. [1]

The district is composed of 16 municipalities: 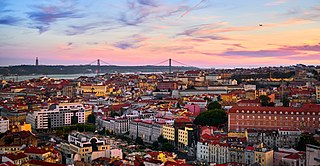 Lisbon is the capital and the largest city of Portugal, with an estimated population of 505,526 within its administrative limits in an area of 100.05 km2. Lisbon's urban area extends beyond the city's administrative limits with a population of around 2.8 million people, being the 10th-most populous urban area in the European Union. About 3 million people live in the Lisbon metropolitan area, which represents approximately 27% of the country's population. It is mainland Europe's westernmost capital city and the only one along the Atlantic coast. Lisbon lies in the western Iberian Peninsula on the Atlantic Ocean and the River Tagus. The westernmost portions of its metro area, the Portuguese Riviera, form the westernmost point of Continental Europe, culminating at Cabo da Roca. 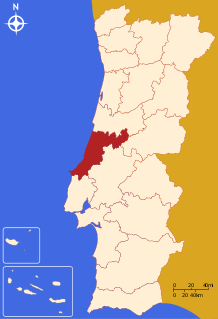 The Siege of Lisbon, from 1 July to 25 October 1147, was the military action that brought the city of Lisbon under definitive Portuguese control and expelled its Moorish overlords. The Siege of Lisbon was one of the few Christian victories of the Second Crusade—it was "the only success of the universal operation undertaken by the pilgrim army", i.e., the Second Crusade, according to the near contemporary historian Helmold, though others have questioned whether it was really part of that crusade. It is seen as a pivotal battle of the wider Reconquista.

NOVA University Lisbon, NOVA, is a Portuguese university whose rectorate is located in Campolide, Lisbon. Founded in 1973, it is the newest of the public universities in the Portuguese capital city, earning its name as the "New" (NOVA) University of Lisbon. 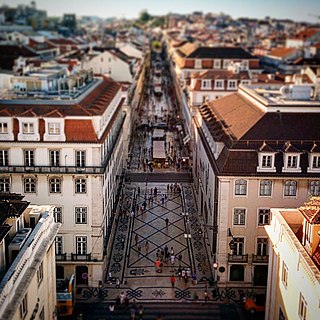 The Baixa(Downtown), also known as the Baixa Pombalina is a neighborhood in the historic center of Lisbon, Portugal. It consists of the grid of streets north of the Praça do Comércio, roughly between the Cais do Sodré and the Alfama district beneath the Lisbon Castle, and extends northwards towards the Rossio and Figueira squares and the Avenida da Liberdade (Lisbon), a tree-lined boulevard noted for its tailoring shops and cafes.

São Jorge Castle is a historic castle in the Portuguese capital of Lisbon, located in the freguesia of Santa Maria Maior. Human occupation of the castle hill dates to at least the 8th century BC while the first fortifications built date from the 1st century BC. The hill on which São Jorge Castle stands has played an important part in the history of Lisbon, having served as the location of fortifications occupied successively by Phoenicians, Carthaginians, Romans, and Moors, before its conquest by the Portuguese in the 1147 Siege of Lisbon. Since the 12th century, the castle has variously served as a royal palace, a military barracks, home of the Torre do Tombo National Archive, and now as a national monument and museum. 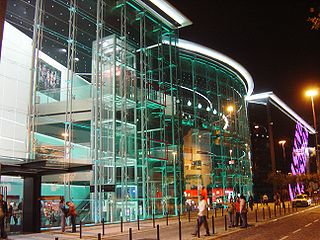 Casino Lisboa is a casino located at Parque das Nações in the city of Lisbon, Portugal. It was inaugurated and opened to the public on April 19, 2006. 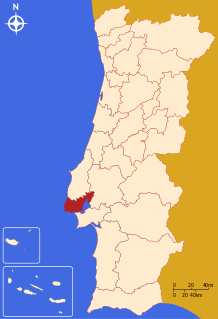 Grande Lisboa is a former Portuguese NUTS III subregion integrated in the Lisboa Region. It was abolished at the January 2015 NUTS 3 revision. It is part of the historical Estremadura Province. It includes the capital and prime city of Portugal, Lisbon. It is the main economical subregion of the country. It covers 1,376 km2 and it is the most populous and most densely populated Portuguese subregion. 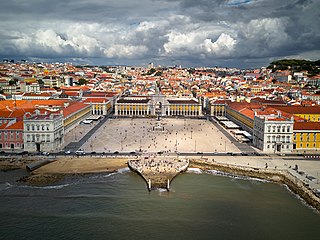 The Praça do Comércio is a large, harbour-facing square in Portugal's capital, Lisbon.

The Chiado is a neighborhood in the historic center of Lisbon, the capital of Portugal. Chiado is an important cultural and commercial district, known for its luxury shopping, historic landmarks, and its numerous theatres and museums. In 1988, the Chiado area was severely affected by a fire. Following an extensive rehabilitation project by Pritzker-winning architect Álvaro Siza Vieira, the Chiado has recovered and become one of the most valuable real estate markets in Portugal. 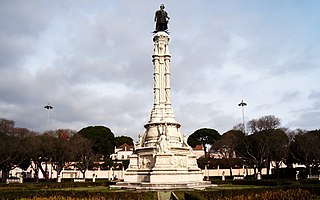 Afonso de Albuquerque Square is a public square in the Belém district of the city of Lisbon, Portugal.

The Navy Museum is a maritime museum in Lisbon, dedicated to all aspects of the history of navigation in Portugal. The museum is administered by the Portuguese Navy and is located in the tourist district of Belém. It occupies a part of the neo-Manueline Western wing of the Jerónimos Monastery with the National Museum of Archaeology, as well as a modern annex built to the North of the monastery. 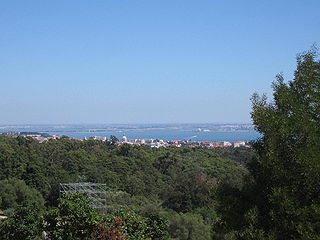 Monsanto Forest Park is a municipal protected forest in Lisbon, Portugal, the largest green patch in the city, with almost 1000 ha (10 km2). It offers a well diversified tree-covered area to the Portuguese capital.

Lisboa, until 2009 named Estremadura, is a Portuguese wine region covering the same areas as the Estremadura region, and taking its name from the country's capital. The region is classified as a Vinho Regional (VR), a designation similar to a French vin de pays region. While the Beiras and Alentejo VRs are largest geographically, the Lisboa region is Portugal's largest producer of wine by volume. The region stretches from Lisbon along the Atlantic coast to the Bairrada DOC.

Praça de Espanha is a square in Lisbon, from which vehicles can proceed to the South bank of the river Tejo.

Igreja de São Domingos is a church in Lisbon, Portugal. It is classified as a National Monument. 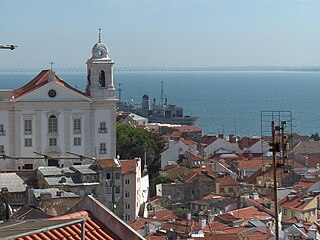 Saint Stephen Church is a church in Alfama district of Lisbon, Portugal. It is classified as a National Monument.

Burnay Palace is a Portuguese palace located in the Alcântara parish in Lisbon, Portugal. 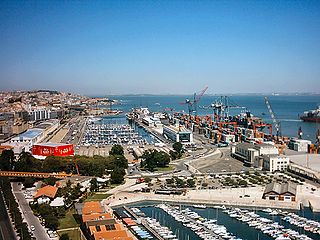 The Port of Lisbon is the third-largest port in Portugal, mainly on the north sides of the Tagus's large natural harbour that opens west, through a short strait, onto the Atlantic Ocean. Each part lies against central parts of the Portuguese capital Lisbon. Due to its strategic site between Europe, Africa, and the Atlantic, it is one of the most accessed and used in Europe. For container ships it begins with a 1080-metre mooring, with cranes, south of a thin, rectangular, pleasure boat marina. It is north-east of the centre of the strait-spanning suspension bridge, the Ponte 25 de Abril. Continuations are to the north-east. These are a bank-side cruise ship terminal next to the old Alfama district, followed by multi-use harbour-side terminals at Xabregas, Grilo, Beato ) and Braço do Prata, Marvila (Lisbon).