In orbital mechanics, a Lissajous orbit (pronounced  [li.sa.ʒu] ), named after Jules Antoine Lissajous, is a quasi-periodic orbital trajectory that an object can follow around a Lagrangian point of a three-body system without requiring any propulsion. Lyapunov orbits around a Lagrangian point are curved paths that lie entirely in the plane of the two primary bodies. In contrast, Lissajous orbits include components in this plane and perpendicular to it, and follow a Lissajous curve. Halo orbits also include components perpendicular to the plane, but they are periodic, while Lissajous orbits are usually not.

In practice, any orbits around Lagrangian points L1, L2, or L3 are dynamically unstable, meaning small departures from equilibrium grow over time. [1] As a result, spacecraft in these Lagrangian point orbits must use their propulsion systems to perform orbital station-keeping. Although they are not perfectly stable, a modest effort of station keeping keeps a spacecraft in a desired Lissajous orbit for a long time.

In the absence of other influences, orbits about Lagrangian points L4 and L5 are dynamically stable so long as the ratio of the masses of the two main objects is greater than about 25. [2] The natural dynamics keep the spacecraft (or natural celestial body) in the vicinity of the Lagrangian point without use of a propulsion system, even when slightly perturbed from equilibrium. [3] These orbits can however be destabilized by other nearby massive objects. For example, orbits around the L4 and L5 points in the Earth–Moon system can last only a few million years instead of billions because of perturbations by the planets. [4]

In the 2005 science fiction novel Sunstorm by Arthur C. Clarke and Stephen Baxter, a huge shield is constructed in space to protect the Earth from a deadly solar storm. The shield is described to have been in a Lissajous orbit at L1. In the story a group of wealthy and powerful people shelter opposite the shield at L2 so as to be protected from the solar storm by the shield, the Earth and the Moon. 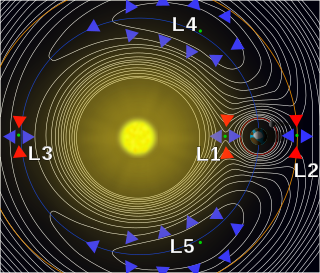 A spacecraft is a vehicle or machine designed to fly in outer space. A type of artificial satellite, spacecraft are used for a variety of purposes, including communications, Earth observation, meteorology, navigation, space colonization, planetary exploration, and transportation of humans and cargo. All spacecraft except single-stage-to-orbit vehicles cannot get into space on their own, and require a launch vehicle. 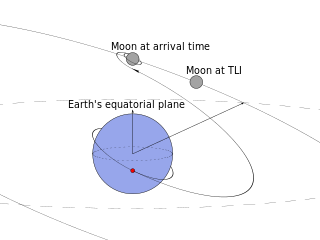 SMART-1 was a Swedish-designed European Space Agency satellite that orbited around the Moon. It was launched on 27 September 2003 at 23:14 UTC from the Guiana Space Centre in Kourou, French Guiana. "SMART-1" stands for Small Missions for Advanced Research in Technology-1. On 3 September 2006, SMART-1 was deliberately crashed into the Moon's surface, ending its mission. 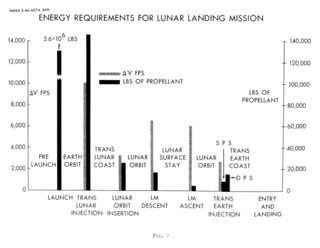 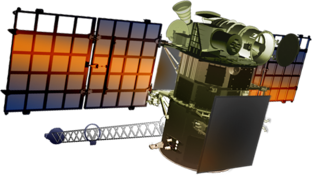 Deep Space Climate Observatory is a National Oceanic and Atmospheric Administration (NOAA) space weather, space climate, and Earth observation satellite. It was launched by SpaceX on a Falcon 9 v1.1 launch vehicle on 11 February 2015, from Cape Canaveral. This is NOAA's first operational deep space satellite and became its primary system of warning Earth in the event of solar magnetic storms.

Time History of Events and Macroscale Interactions during Substorms (THEMIS) mission began in February 2007 as a constellation of five NASA satellites to study energy releases from Earth's magnetosphere known as substorms, magnetic phenomena that intensify auroras near Earth's poles. The name of the mission is an acronym alluding to the Titan Themis.

A low-energy transfer, or low-energy trajectory, is a route in space that allows spacecraft to change orbits using very little fuel. These routes work in the Earth–Moon system and also in other systems, such as between the moons of Jupiter. The drawback of such trajectories is that they take longer to complete than higher-energy (more-fuel) transfers, such as Hohmann transfer orbits.

A space probe, or simply probe, is a robotic spacecraft that doesn't orbit the Earth, but instead explores farther into outer space. A space probe may approach the Moon; travel through interplanetary space; flyby, orbit, or land or fly on other planetary bodies; or enter interstellar space.

A halo orbit is a periodic, three-dimensional orbit near one of the L1, L2 or L3 Lagrange points in the three-body problem of orbital mechanics. Although a Lagrange point is just a point in empty space, its peculiar characteristic is that it can be orbited by a Lissajous orbit or a halo orbit. These can be thought of as resulting from an interaction between the gravitational pull of the two planetary bodies and the Coriolis and centrifugal force on a spacecraft. Halo orbits exist in any three-body system, e.g., a Sun–Earth–orbiting satellite system or an Earth–Moon–orbiting satellite system. Continuous "families" of both northern and southern halo orbits exist at each Lagrange point. Because halo orbits tend to be unstable, stationkeeping may be required to keep a satellite on the orbit.

A distant retrograde orbit (DRO), as most commonly conceived, is a spacecraft orbit around a moon that is highly stable because of its interactions with two Lagrange points (L1 and L2) of the planet-moon system.

A near-rectilinear halo orbit (NRHO) is a type of halo orbit that has slightly curved, so near straight sides, between close passes with an orbiting body. A use of such an orbit is currently planned in cislunar space but, as of early-2021, has not been used on any spacecraft. This planned Moon-centric orbit will serve as a staging area for future lunar missions. However, an NRHO need not involve the Earth-Moon system, and the orbit could be used in a variety of other contexts around other bodies in the Solar System and beyond.