This article is about the list of ADESBA players. AD Bairro is a Cape Verdean football (soccer) club based in the neighborhood of Craveiro Lopes in Praia, Cape Verde and plays at Estádio da Várzea. The club was founded in 1975.

One of the most notable players of ADESBA was Zé Piguita who played from 1999 to 2002.

Boavista Futebol Clube is a football club that had played in the Premier division and plays in the Santiago Island South Zone League in Cape Verde. It is based in the city of Praia in the island of Santiago. The team has only reached a few of these games before and after independence. Its current president is Luis Manuel Semedo who once coached Boa Vista's Académica Operária. and its manager is Nelito Antunes.

José Barros Silva, known as Zé Piguita, is a Cape Verdean retired footballer who played as a defender.

Clube Desportivo Scorpions Vermelho de Santa Cruz is a football (soccer) club that plays in the Santiago Island League North Zone of the Grupo Centro Sul in Cape Verde. The team is based in the town of Santa Cruz in the southeastern part of the island of Santiago and plays at Estádio Municipal 25 de Julho west of town. Since the implementation of the two tier regional system in 2015, Scorpion Vermelho are one of ten unrelegated clubs of northern Santiago.

The 2008 Cape Verdean Football Championships season was the 29th of the competition of the first-tier football in Cape Verde. Its started on 10 May and finished on 16 August, later than the last season. The tournament was organized by the Cape Verdean Football Federation. Sporting would win their 7th title and third straight after defeating Académica do Mindelo in penalty kicks. Sporting gained entry into the 2009 CAF Champions League, it is the last club to enter to date. No second place club would participate in the 2009 CAF Confederation Cup. 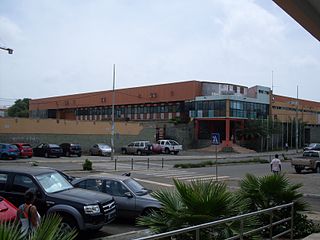 The Cape Verdean Basketball Federation is the basketball association in Cape Verde. It is located in the capital city of Praia at Gimnodesportivo Vava Duarte in the neighborhood of Chã das Areias, also the volleyball and the athletics federation are house there. Its current president is Kitana Cabral.

Associação Desportiva do Bairro Craveiro Lopes is a basketball club based in the neighborhood of Craveiro Lopes just west of the center of Praia on the island of Santiago, Cape Verde. The team is a member of the Santiago South Regional Basketball Association. It is one of four sporting departments of ADESBA. The club won three national championship titles. Its current president is Carlos Sena Teixeira. Its nickname is canarinha which is Portuguese for the little canary.

In the 2007–08 season of competitive football (soccer) in Cape Verde The 2nd Cape Verdean Cup was to took place that year but it was can celled due to that n ineligible player were fielded from Académica Fogo and later Sal Rei.

Wuilito Paulo Tavares Fernandes, also known as Totti, is a Cape Verdean football player who plays as a midfielder or forward.

The 2012 Cape Verdean Cup season was the 5th competition of the regional football cup in Cape Verde. The season started on 11 August and finished with the cup final on 24 August. The cup competition was organized by the Cape Verdean Football Federation. Maio's Onze Unidos won their only title.