The number shown after each Act's title is its chapter number. Acts are cited using this number, preceded by the year(s) of the reign during which the relevant parliamentary session was held; thus the Union with Ireland Act 1800 is cited as "39 & 40 Geo. 3 c. 67", meaning the 67th Act passed during the session that started in the 39th year of the reign of George III and which finished in the 40th year of that reign. Note that the modern convention is to use Arabic numerals in citations (thus "41 Geo. 3" rather than "41 Geo. III"). Acts of the last session of the Parliament of Great Britain and the first session of the Parliament of the United Kingdom are both cited as "41 Geo. 3". Acts passed by the Parliament of Great Britain did not have a short title; however, some of these Acts have subsequently been given a short title by Acts of the Parliament of the United Kingdom (such as the Short Titles Act 1896).

Before the Acts of Parliament (Commencement) Act 1793 came into force on 8 April 1793, Acts passed by the Parliament of Great Britain were deemed to have come into effect on the first day of the session in which they were passed. Because of this, the years given in the list below may in fact be the year before a particular Act was passed.

The Statutes at Large 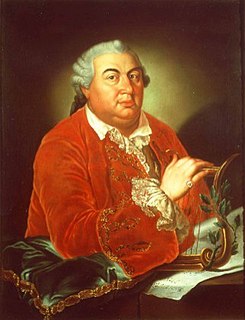 Prince Dmitry Vasilyevich Ukhtomsky, Дмитрий Васильевич Ухтомский (1719–1774) was the chief architect of Moscow, Russia during the reign of Empress Elizabeth.

Antonio Palomba (20 December 1705 - 1769) was an Italian opera librettist, poet, harpsichordist, and music educator. He also worked as a notary. Born in Naples, he became a teacher of the harpsichord at the Teatro della Pace in 1749. Most of his more than 50 opera libretti were comedic works written for composers of the Neapolitan school. He also wrote some works for performance in Florence, Bologna and abroad. He died in Naples in 1769; one of the victims of a fever epidemic in the city. Many of his libretti were set more than once to music, and composers continued to use his libretti up into the 1830s.