The monarchs of Bulgaria ruled the country during three periods of its history as an independent country: from the establishment of the First Bulgarian Empire in 681 to the Byzantine conquest of Bulgaria in 1018; from the Uprising of Asen and Peter that established the Second Bulgarian Empire in 1185 to the annexation of the rump Bulgarian principality into the Ottoman Empire in 1396; and from the re-establishment of an independent Bulgaria in 1878 to the abolition of monarchy in a [1] referendum held on 15 September 1946.

Early Bulgarian rulers possibly used the title Kanasubigi (Khan), later knyaz (prince) for a brief period, and subsequently tsar (emperor). The title tsar, the Bulgarian form of the Latin Caesar , was first adopted and used in Bulgaria by Simeon I, following a decisive victory over the Byzantine Empire in 913. It was also used by all of Simeon I's successors until the fall of Bulgaria under Ottoman rule in 1396. After Bulgaria's liberation from the Ottomans in 1878, its first monarch Alexander I adopted the title knyaz, or prince. However, when de jure independence was proclaimed under his successor Ferdinand in 1908, the title was elevated to the customary tsar once more. The use of tsar continued under Ferdinand and later under his heirs Boris III and Simeon II until the abolition of monarchy in 1946.

In the few surviving medieval Bulgarian royal charters, the monarchs of Bulgaria styled themselves as "In Christ the Lord Faithful Emperor and Autocrat of all Bulgarians" or similar variations, sometimes including “... and Romans, Greeks, or Vlachs".

This list does not include the mythical Bulgar rulers and the rulers of Old Great Bulgaria listed in the Nominalia of the Bulgarian khans as well as unsuccessful claimants to the throne who are not generally listed among the Bulgarian monarchs.

There is one living former Bulgarian Tsar: Simeon Sakskoburggotski.

A documentary named "The Boy Who Was a King", about his remarkable life, was displayed at the 2011 edition of the IDFA.

^  a: In the Nominalia of the Bulgarian khans the title of Asparukh is the Slavic Knyaz (Prince). The title Khan is not used in the manuscript. [65]
^  b: There are sources which suggest that Krum descended from those Bulgars who settled in Pannonia and lived under the rule the Avars. Some historians assume that Krum was from the Dulo dynasty and that with his ascension the old ruling dynasty was restored. [66] [67] According to Zlatarski, Krum was the founder of a new dynasty. [68]
^  c: In the Ballshi Inscription, the title of Boris I is Archon of Bulgaria. The Byzantine title archon is usually translated with ruler. Contemporary Bulgarian sources used the title Knyaz, while during the Second Bulgarian Empire he was referred to as Tsar. [69]
^  d: When Boris I was baptised he received the Christian name Michael, after his godfather, the Byzantine emperor Michael III. He is often called by the historians Boris-Michael. [70] For this reason there is no explicit Michael I, while there are both Boris II and Michael II.
^  e: During the negotiations with Pope Innocent III, Kaloyan insisted that the Pope should recognize him as Imperator, the title equal to Tsar and based his claims on the imperial recognition of the monarchs of the First Bulgarian Empire. He was only crowned as Rex (King) but in his later correspondence with Innocent III, Kaloyan sent him his gratitude for his recognition as Imperator and used that title. [71]

Tsar SimeonI the Great ruled over Bulgaria from 893 to 927, during the First Bulgarian Empire. Simeon's successful campaigns against the Byzantines, Magyars and Serbs led Bulgaria to its greatest territorial expansion ever, making it the most powerful state in contemporary Eastern and Southeast Europe. His reign was also a period of unmatched cultural prosperity and enlightenment later deemed the Golden Age of Bulgarian culture. 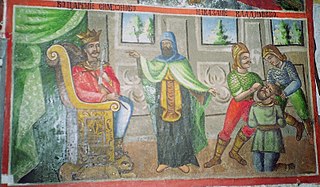 Vladimir-Rasate was the ruler of the First Bulgarian Empire from 889 to 893.

The First Bulgarian Empire was a medieval Bulgarian state that existed in Southeastern Europe between the 7th and 11th centuries AD. It was founded in 681 when Bulgar tribes led by Asparuh moved to the northeastern Balkans. There they secured Byzantine recognition of their right to settle south of the Danube by defeating – possibly with the help of local South Slavic tribes – the Byzantine army led by Constantine IV. At the height of its power, Bulgaria spread from the Danube Bend to the Black Sea and from the Dnieper River to the Adriatic Sea.

The Battle of Marcellae took place in 792 at Marcellae (Markeli), near the modern town of Karnobat in south eastern Bulgaria, the same site as an earlier battle in 756. The battle was between the forces of the Byzantine Empire, led by Constantine VI, and those of Bulgaria under Kardam. The Byzantines were routed and forced to retreat to Constantinople.

The Battle of Southern Buh occurred near the banks of the eponymous river, in modern Ukraine. The result was a great Bulgarian victory which forced the Magyars of the Etelköz realm to abandon the steppes of southern Ukraine, as well as their aspirations of subduing Danube Bulgaria, retreating to the newly occupied lands beyond the Carpathian Mountains, centering on Pannonia, from where they will stage their next war, against Moravians this time, defeating them and establishing a new Hungary, after the Etelköz state in modern Ukraine, which succeeded an earlier stage of statehood for the Magyars, the legendary although short-lived Levedia, and even one before that, in the actual country of origin for the Magyars, Yugra, beyond river Ob.

The Battle of Pegae was fought between 11 and 18 March 921 in the outskirts of Constantinople between the forces of the Bulgarian Empire and the Byzantine Empire during the Byzantine–Bulgarian war of 913–927. The battle took place in a locality called Pegae, named after the nearby Church of St. Mary of the Spring. The Byzantine lines collapsed at the very first Bulgarian attack and their commanders fled the battlefield. In the subsequent rout most Byzantine soldiers were killed by the sword, drowned or were captured. 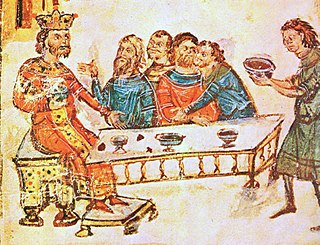 The medieval Bulgarian army was the primary military body of the First and the Second Bulgarian Empires. During the first decades after the foundation of the country, the army consisted of a Bulgar cavalry and a Slavic infantry. The core of the Bulgarian army was the heavy cavalry, which consisted of 12,000–30,000 heavily armed riders. At its height in the 9th and 10th centuries, it was one of the most formidable military forces in Europe and was feared by its enemies. There are several documented cases of Byzantine commanders abandoning an invasion because of a reluctance to confront the Bulgarian army on its home territory.

From ca. 970 until 1018, a series of conflicts between the Bulgarian Empire and the Byzantine Empire led to the gradual reconquest of Bulgaria by the Byzantines, who thus re-established their control over the entire Balkan peninsula for the first time since the 7th-century Slavic invasions. The struggle began with the incorporation of eastern Bulgaria after the Russo–Byzantine War (970–971). Bulgarian resistance was led by the Cometopuli brothers, who based in the unconquered western regions of the Bulgarian Empire led it until its fall under Byzantine rule in 1018.

The Treaty of 815 was a 30-year peace agreement signed in Constantinople between the Bulgarian Khan Omurtag and the Byzantine Emperor Leo V the Armenian.

Sviatoslav's invasion of Bulgaria refers to a conflict beginning in 967/968 and ending in 971, carried out in the eastern Balkans, and involving the Kievan Rus', Bulgaria, and the Byzantine Empire. The Byzantines encouraged the Rus' ruler Sviatoslav to attack Bulgaria, leading to the defeat of the Bulgarian forces and the occupation of the northern and north-eastern part of the country by the Rus' for the following two years. The allies then turned against each other, and the ensuing military confrontation ended with a Byzantine victory. The Rus' withdrew and eastern Bulgaria was incorporated into the Byzantine Empire.

Kutmichevitsa was an administrative region of the Bulgarian Empire as well as Byzantine Empire during much of the Middle Ages, corresponding roughly with the northwestern part of the region of Macedonia and the southern part of Albania, broadly taken to be the area included in the triangle Saloniki-Skopje-Vlora. It had an important impact on the formation, endorsement and development of the Old Church Slavonic and culture. The Debar–Velich diocese of the Bulgarian Orthodox Church was created in Kutmichevitsa whose first bishop between 886 and 893 was Clement of Ohrid, appointed by Knyaz Boris I.

Peter was a Bulgarian noble and relative of knyaz (khan) Boris I who was in charge of diplomatic missions during the Christianization of Bulgaria. His position in the Bulgarian administrative hierarchy is unknown but it has been suggested that he had the title kavhan, i. e. the second person in the state after the monarch.

The People's Council of Preslav took place in 893. It was among the most important events in the history of the First Bulgarian Empire and was a cornerstone of the Christianization of Bulgaria under prince Boris I.

The Bulgarian–Serbian wars of 917–924 were a series of conflicts fought between the Bulgarian Empire and the Principality of Serbia as a part of the greater Byzantine–Bulgarian war of 913–927. After the Byzantine army was annihilated by the Bulgarians in the battle of Achelous, the Byzantine diplomacy incited the Principality of Serbia to attack Bulgaria from the west. The Bulgarians dealt with that threat and replaced the Serbian prince with a protégé of their own. In the following years the two empires competed for control over Serbia. In 924 the Serbs rose again, ambushed and defeated a small Bulgarian army. That turn of events provoked a major retaliatory campaign that ended with the annexation of Serbia in the end of the same year.

The Byzantine–Bulgarian war of 913–927 was fought between the Bulgarian Empire and the Byzantine Empire for more than a decade. Although the war was provoked by the Byzantine emperor Alexander's decision to discontinue paying an annual tribute to Bulgaria, the military and ideological initiative was held by Simeon I of Bulgaria, who demanded to be recognized as Tsar and made it clear that he aimed to conquer not only Constantinople but the rest of the Byzantine Empire, as well.

Krum's dynasty refers to the royal and later imperial family founded by the Khan of Bulgaria Krum, producing the monarchs of First Bulgarian Empire between 803 and 991. During this period Bulgaria adopted Christianity, reached its greatest territorial extend and triggered a golden age of culture and literature. Under the patronage of these monarchs Bulgaria became the birthplace of the Cyrillic alphabet; Old Bulgarian became the lingua franca of much of Eastern Europe and it came to be known as Old Church Slavonic. As a result of the victory in the Byzantine–Bulgarian war of 913–927 the Byzantine Empire recognized the imperial title of the Bulgarian rulers and the Bulgarian Orthodox Church as an independent Patriarchate.