Category 4 hurricanes have maximum sustained winds of 113–136  knots (130–156 mph, 209–251 km/h). [1] "Sustained winds" refers to the average wind speed observed over one minute at a height of 10  meters (33 ft) above ground. Gust can be 30% higher than the sustained winds. [2] Mobile homes and other buildings without fixed structures can be completely destroyed, and the lower floors of sturdier structures usually sustain major damage. In addition to the winds, the cyclones generally produce a storm surge of 13–18 feet (4–5.5 m) above normal, potentially causing major beach erosion. Heavy, irreparable damage and/or near complete destruction of gas station canopies and other wide span overhang type structures are also very common, and mobile and manufactured homes are often completely destroyed. Low-level terrain may be flooded well inland, as well. [3] In addition, Category 4 hurricanes are very often Cape Verde type hurricanes. Cape Verde hurricanes are usually the strongest, and their track sometimes points them towards the United States, or other land. [4]

The number of Category 4 and 5 hurricanes appears to have nearly doubled in occurrence in from 1970 to 2004. [5] It is likely that the increase in Atlantic tropical storm and hurricane frequency is primarily due to improved monitoring. [6] [7] [8] [9] [10]

Due to growing population in major coastal cities, many areas have become more vulnerable to strong hurricanes, especially categories 4 and 5. [11]

All of the storms listed in this analysis are listed in chronological order, but they also list the minimum central pressure and maximum sustained winds. Each of these meteorological readings are taken using a specific meteorological instrument. For modern storms, the minimum pressure measurements are taken by Reconnaissance Aircraft using dropsondes, or by determining it from satellite imagery using the Dvorak technique. For older storms, pressures are often incomplete, typically being provided by ship-reports or land-observations. None of these methods can provide constant pressure measurements; thus it is possible the only measurement occurred when the cyclone was at a lesser strength. [12] Sustained winds are taken using an Anemometer at 10 meters (33 ft) above the ground. [13]

A total of 94 hurricanes in the Atlantic Ocean Basin, including the Gulf of Mexico and the Caribbean, have reached Category 4 status as their peak intensity. (Note that Category 4 storms that intensified later to Category 5 status are not included in this analysis.)

Some pressure readings are unavailable due to scarce information.

In the years between 1851 and 1900, thirteen Category 4 storms are known to have occurred in the Atlantic Ocean. These numbers are limited by the observation techniques used prior to the use of satellite imagery in the 1960s.

In the years between 2001 and the present time, 24 Category 4 hurricanes formed within the confines of the Atlantic Ocean. A dagger () denotes that the storm temporarily weakened below Category 4 intensity during the specified period of time.

The following hurricanes made landfall at some location at any strength. Due to inaccuracies in data, tropical depression landfalls are not included. Category 5 hurricanes are also not included in the table below. Several of these storms weakened slightly after attaining Category 4 status as they approached land; this is usually a result of dry air, shallower water due to shelving, cooler waters, or interaction with land. 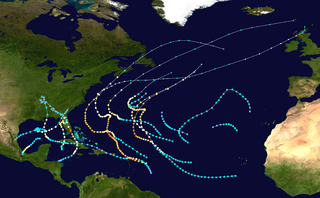 The 1950 Atlantic hurricane season was the first year in the Atlantic hurricane database (HURDAT) that storms were given names in the Atlantic basin. Names were taken from the Joint Army/Navy Phonetic Alphabet, with the first named storm being designated "Able", the second "Baker", and so on. It was an active season with sixteen tropical storms, with eleven of them developing into hurricanes. Six of these hurricanes were intense enough to be classified as major hurricanes—a denomination reserved for storms that attained sustained winds equivalent to a Category 3 or greater on the present-day Saffir–Simpson scale. One storm, the twelfth of the season, was unnamed and was originally excluded from the yearly summary, and three additional storms were discovered in re-analysis. The large quantity of strong storms during the year yielded, prior to modern reanalysis, what was the highest seasonal accumulated cyclone energy (ACE) of the 20th century in the Atlantic basin; 1950 held the seasonal ACE record until broken by the 1995 Atlantic hurricane season. However, later examination by researchers determined that several storms in the 1950 season were weaker than thought, leading to a lower ACE than assessed originally. 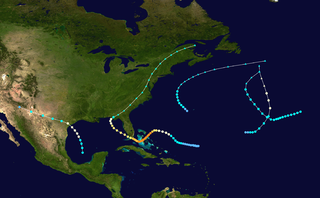 The 1929 Atlantic hurricane season was among the least active hurricane seasons in the Atlantic on record – featuring only five tropical cyclones. Of these five tropical systems, three of them intensified into a hurricane, with one strengthening further into a major hurricane. The first tropical cyclone of the season developed in the Gulf of Mexico on June 27. Becoming a hurricane on June 28, the storm struck Texas, bringing strong winds to a large area. Three fatalities were reported, while damage was conservatively estimated at $675,000 (1929 USD). 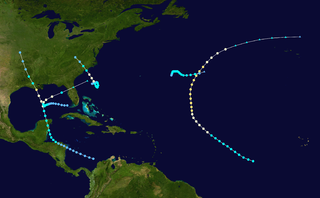 The 1920 Atlantic hurricane season featured tropical storms and hurricanes only in the month of September. Although no "hurricane season" was defined at the time, the present-day delineation of such is June 1 to November 30. The first system, a hurricane, developed on September 7 while the last, a tropical depression, transitioned into an extratropical cyclone on October 27. Of note, four of the six cyclones co-existed with another tropical cyclone during the season.

The 1919 Atlantic hurricane season was among the least active hurricane seasons in the Atlantic on record, featuring only five tropical storms. Of those five tropical cyclones, two of them intensified into a hurricane, with one strengthening into a major hurricane Two tropical depressions developed in the month of June, both of which caused negligible damage. A tropical storm in July brought minor damage to Pensacola, Florida, but devastated a fleet of ships. Another two tropical depressions formed in August, the first of which brought rainfall to the Lesser Antilles. 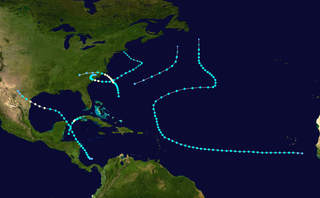 The 1913 Atlantic hurricane season was the third consecutive year with a tropical cyclone developing before June. Although no "hurricane season" was defined at the time, the present-day delineation of such is June 1 to November 30. The first system, a tropical depression, developed on May 5 while the last transitioned into an extratropical cyclone on October 30. Of note, the seventh and eighth cyclones existed simultaneously from August 30 to September 4.

The 1919 Florida Keys hurricane was a massive and damaging tropical cyclone that swept across areas of the northern Caribbean Sea and the United States Gulf Coast in September 1919. Remaining an intense Atlantic hurricane throughout much of its existence, the storm's slow-movement and sheer size prolonged and enlarged the scope of the hurricane's effects, making it one of the deadliest hurricanes in United States history. Impacts were largely concentrated around the Florida Keys and South Texas areas, though lesser but nonetheless significant effects were felt in Cuba and other areas of the United States Gulf Coast. The hurricanes peak strength in Dry Tortugas in the lower Florida keys, also made it one of the most powerful Atlantic hurricanes to make landfall in the United States.

The 1853 Atlantic hurricane season featured eight known tropical cyclones, none of which made landfall. Operationally, a ninth tropical storm was believed to have existed over the Dominican Republic on November 26, but HURDAT – the official Atlantic hurricane database – now excludes this system. The first system, Tropical Storm One, was initially observed on August 5. The final storm, Hurricane Eight, was last observed on October 22. These dates fall within the period with the most tropical cyclone activity in the Atlantic. At two points during the season, pairs of tropical cyclones existed simultaneously. Four of the cyclones only have a single known point in their tracks due to a sparsity of data, so storm summaries for those systems are unavailable.

The 1875 Atlantic hurricane season featured three landfalling tropical cyclones. However, in the absence of modern satellite and other remote-sensing technologies, only storms that affected populated land areas or encountered ships at sea were recorded, so the actual total could be higher. An undercount bias of zero to six tropical cyclones per year between 1851 and 1885 has been estimated. There were five recorded hurricanes and one major hurricane – Category 3 or higher on the modern-day Saffir–Simpson scale.

The 1869 Atlantic hurricane season was the earliest season in the Atlantic hurricane database in which there were at least ten tropical cyclones. Initially there were only three known storms in the year, but additional research uncovered the additional storms. Meteorologist Christopher Landsea estimates up to six storms may remain missing from the official database for each season in this era, due to small tropical cyclone size, sparse ship reports, and relatively unpopulated coastlines. All activity occurred in a three-month period between the middle of August and early October. 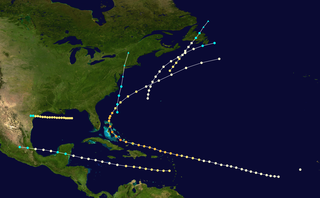 The 1866 Atlantic hurricane season was originally one of only four Atlantic hurricane seasons in which every known tropical cyclone attained hurricane status, along with 1852, 1858, and 1884. Initially, there were three known storms during the season, but a re-analysis confirmed the increased activity. There were also two other systems that were included as tropical cyclones at one time, although both were considered to have been other storms already in the database. All tropical activity occurred between the middle of July and the end of October. There may have been additional unconfirmed tropical cyclones during the season. Meteorologist Christopher Landsea estimates that up to six storms were missed from the official database, due to small tropical cyclone size, sparse ship reports, and relatively unpopulated coastlines.