This is a list of Kogi State administrators and governors. Kogi State was created on 27 August,1991 out of Benue State and Kwara State.

Kogi, is a state in the central region (Middle-Belt) of Nigeria. It is popularly called the Confluence State because of the confluence of River Niger and River Benue at its capital, Lokoja, which is the first administrative capital of modern-day Nigeria.

Nasarawa is a state in north central zone of Nigeria. Its capital is Lafia.

Ibrahim Idris is a Nigeria businessman who was elected Governor of Kogi State in Nigeria in April 2003, and reelected in April 2007. He is a member of the ruling People's Democratic Party (PDP). Ibrahim Idris was replaced as governor by his brother-in-law Captain Idris Wada, who won an election in December 2011 and took office in January 2012.

Prince Abubakar Audu was twice the Governor of Nigeria's Kogi State. His first tenure was from January 1992 until November 1993 and the second from 29 May 1999 to 29 May 2003. He died due to a bleeding ulcer shortly after the announcement of the election results on 22 November 2015, while seeking to be re-elected as governor on the platform of Nigeria's ruling party, All Progressives Congress (APC).

Jonathan Tunde Ogbeha is a retired general from Kogi State, Nigeria, who was administrator of Akwa Ibom State and then of Bendel State during the military rule of General Ibrahim Babangida (1985–1993). After the return to democracy in 1999 he was the elected senator for the Kogi West constituency of Kogi State from May 1999 to May 2007. He is an influential figure in Kogi State politics. A biography on Ogbeha titled "Jonathan Tunde Ogbeha: A Noble Path" was written by Innocent Nzeke Waniko, a journalist, and presented publicly on 1 September 2017. The book chronicles the early life and comprehensively captures the life and career of Ogbeha.

Ahmed Tijani Ahmed was a Nigerian politician who was Senator for the Kogi Central constituency in Kogi State from 1999 to 2003 as a member of the People's Democratic Party (PDP).

David Medayese Jemibewon is a retired Nigerian Army major general who served as military governor of the now defunct Western State during the military regime of General Murtala Muhammed, governor of Oyo State after it had been created from part of the old Western State during the military regime of General Olusegun Obasanjo, and later as Minister of Police Affairs in the cabinet of President Olusegun Obasanjo after the return to democracy. He was a contender for the Kogi West Senatorial office in Kogi State.

General (retired) Augustine Aniebo, was the Military Administrator of Borno State, Nigeria during the military regime of General Sani Abacha.He then became Administrator of Kogi State, Nigeria from August 1998 to 29 May 1999 during the transitional regime of General Abdulsalami Abubakar, handing over to the elected civilian governor Abubakar Audu on May 29, 1999 at the start of the Nigerian Fourth Republic.

Brigadier General (retired) Danladi Mohammed Zakari was the first Military Administrator of Kogi State, Nigeria after it was created in August 1991 from parts of Benue and Kwara states. He held office from August 1991 until January 1992 during the military regime of General Ibrahim Babangida, handing over to the elected governor Abubakar Audu at the start of the Nigerian Third Republic.

Clarence Olafemi was appointed acting Governor of Kogi State, Nigeria in February 2008 after the election of governor Ibrahim Idris was annulled. He handed back to Ibrahim Idris on 29 March 2008 after Idris had won a fresh election.

General Ibrahim Babangida became head of state after a coup on 27 August 1987, replacing General Muhammadu Buhari. In September 1987 Babangida created Akwa Ibom State from part of Cross River State and Katsina State from part of Kaduna State. In August 1991 he created eleven more states. He arranged for elections for states governors in 1991, with the military governors handing over to elected civilian governors in January 1992 at the start of the Nigerian Third Republic.

The Nigerian state governors 2011–2015 term formally begins in May 2011 for the 26 state Governors in Nigeria elected in April 2011. In the 10 other states, elections were delayed until the current incumbent had served their full term. Governors are normally elected for a four-year term during the national elections in which the President and members of the upper and lower house are also elected, as are the state legislators. In some cases, the first officeholder may be replaced by another, for example through death, impeachment or if an election is annulled. 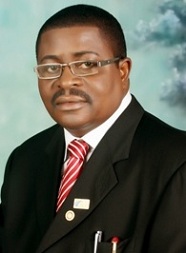 Emmanuel Dangana Ocheja is a Nigerian Senator who represented Kogi East senatorial district in the National Assembly, and a member of the All Progressives Congress.

Yahya Adoza Bello is a Nigerian politician, businessman and the current Governor of Kogi State. Bello was declared winner of the 2015 Kogi gubernatorial election after he was chosen on the platform of the All Progressives Congress as the replacement for the late Abubakar Audu who originally won the election but died before the result was declared.

Yakubu Oseni is a Nigerian politician and a Senator of the Federal Republic of Nigeria for Kogi Central Senatorial District of Kogi State Nigeria. He was elected in the February 2019 Nigerian general elections under the platform of the All Progressives Congress (APC).