The Interstate Highways in Colorado are the segments of the national Dwight D. Eisenhower System of Interstate and Defense Highways that are owned and maintained by the state of Colorado, totaling about 956 miles (1,539 km) of interstate highway. [1] Colorado has 3 main highways (two-digit routes), and 2 auxiliary highways (three-digit routes), totaling 5 interstates, all are located within the Denver Metropolitan Area. The longest interstate in Colorado is Interstate 70, which is 449.58 miles (723.53 km) [2] There are also 17 active business routes and 7 former business routes, most of them are from I-70. The last segment of interstate highway to open up to date was Interstate 76, which was between Pecos Street and I-25 northwest of Denver. [1] 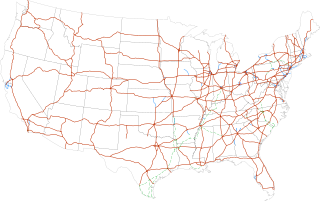 The Dwight D. Eisenhower National System of Interstate and Defense Highways, commonly known as the Interstate Highway System, is a network of controlled-access highways that forms part of the National Highway System in the United States. Construction of the system was authorized by the Federal Aid Highway Act of 1956. The system extends throughout the contiguous United States and has routes in Hawaii, Alaska, and Puerto Rico.

Interstate 70 (I-70) is a major east–west Interstate Highway in the United States that runs from I-15 near Cove Fort, Utah, to a Park and Ride lot just east of I-695 in Baltimore, Maryland. I-70 approximately traces the path of U.S. Route 40 east of the Rocky Mountains. West of the Rockies, the route of I-70 was derived from multiple sources. The Interstate runs through or near many major cities, including Denver, Topeka, Kansas City, St. Louis, Indianapolis, Columbus, Pittsburgh, and Baltimore. The sections of the interstate in Missouri and Kansas have laid claim to be the first interstate in the United States. The Federal Highway Administration has claimed the section of I-70 through Glenwood Canyon, Colorado, completed in 1992, to be the last piece of the Interstate Highway system, as originally planned, to open to traffic. The construction of I-70 in Colorado and Utah is considered an engineering marvel, as the route passes through the Eisenhower Tunnel, Glenwood Canyon, and the San Rafael Swell. The Eisenhower Tunnel is the highest point along the Interstate Highway system, with an elevation of 11,158 ft (3,401 m).

Interstate 24 (I-24) is an Interstate Highway in the Midwestern and Southeastern United States. It runs diagonally from I-57, 10 miles (16 km) south of Marion, Illinois, to Chattanooga, Tennessee, at I-75. It travels through Illinois, Kentucky, Tennessee, and Georgia. As an even-numbered Interstate, it is signed as an east–west route, though the route follows a more southeast–northwest routing, passing through Nashville, Tennessee. The numbering deviates from the standard Interstate Highway System grid, lying further north than its number would indicate west of Nashville. I-24 constitutes the majority of a high-traffic corridor between St. Louis and Atlanta, a corridor which also includes I-64 and I-57 northwest of I-24, and I-75 southeast of I-24.

Interstate 39 (I-39) is a highway in the Midwestern United States. I-39 runs from Normal, Illinois at I-55 to Wisconsin Highway 29 (WIS 29) in the town of Rib Mountain, Wisconsin, which is approximately six miles (9.7 km) south of Wausau. I-39 was designed to replace U.S. Route 51 (US 51), which in the early 1980s was one of the busiest two-lane highways in the United States. I-39 was built in the 1980s and 1990s. In Illinois, the route has a total length of 140.82 miles (226.63 km). In Wisconsin, I-39 has a distance of 182 miles (293 km). With the exception of an eight-mile (13 km) segment around Portage, the Interstate shares a route with at least one other route number in I-39's entirety. From Rockford to Portage, I-39 is concurrent with I-90. I-94 joins the pair in Madison until Portage. At 29 miles (47 km) in length, this concurrency of three Interstates is the longest in the country. From Portage northward, US 51 is co-signed with the Interstate and has exit numbers based on its mileage.

The Eisenhower Tunnel, officially the Eisenhower–Edwin C. Johnson Memorial Tunnel, is a dual-bore, four-lane vehicular tunnel in the western United States, approximately 60 miles (97 km) west of Denver, Colorado. The tunnel carries Interstate 70 (I-70) under the Continental Divide in the Rocky Mountains. With a maximum elevation of 11,158 feet (3,401 m) above sea level, it is one of the highest vehicular tunnels in the world. The tunnel is the longest mountain tunnel and highest point on the Interstate Highway System. With the completion of the second bore in 1979, it was one of the last major segments of the Interstate system to be completed. Opened in 1973, the westbound bore is named after Dwight D. Eisenhower, the U.S. President for whom the Interstate system is also named. The eastbound bore was completed in 1979 and is named for Edwin C. Johnson, a governor and U.S. Senator who lobbied for an Interstate Highway to be built across Colorado.

U.S. Route 6 (US 6), also called the Grand Army of the Republic Highway, honoring the American Civil War veterans association, is a main route of the U.S. Highway system. While it currently runs east-northeast from Bishop, California, to Provincetown, Massachusetts, the route has been modified several times. The highway's longest-lasting routing, from 1936 to 1964, had its western terminus at Long Beach, California. During this time, US 6 was the longest highway in the country.

U.S. Route 85 (US 85) is a 1,479-mile-long (2,380 km) north–south United States Highway that travels in the Mountain and Northern Plains states of the United States. The southern terminus of the highway is at the Mexican border in El Paso, Texas, connecting with Mexican Federal Highway 45. The northern terminus is at the Canadian border in Fortuna, North Dakota, where the route continues north as Saskatchewan Highway 35. The highway route is part of the CanAm Highway. Sections of US 85 are designated as the Theodore Roosevelt Expressway.

Interstate 76 (I-76) is an Interstate Highway in the Western United States that runs from Interstate 70 in Arvada, Colorado to an intersection with Interstate 80 near Big Springs, Nebraska. It is one of the two interstates that carries the "76" designation but it has no connection with the eastern route. Spanning 187.29 miles (301.41 km), all but approximately three miles of the highway is in Colorado. Along the route, the highway runs concurrent with US 6, US 85 in the Denver Metro Area, and US 34 from Wiggins to Fort Morgan. It currently has no auxiliary interstates but it has two business routes that are located in northeastern Colorado.

Interstate 225 (I-225) is a 11.959 mile (19.246 km) connector spur route of Interstate 25 in Colorado. It is the only auxiliary route of Interstate 25, and one of two auxiliary Interstate highways in the state of Colorado. I-225 traverses Aurora and small portions of Denver and Greenwood Village. It runs north from Interstate 25 in the Denver Tech Center to Interstate 70 north of Aurora. It interchanges with state highway 83, state highway 30 and Interstate 70 Business/U.S. Highway 40/U.S. Highway 287, known locally as Colfax Avenue. Construction on the freeway began in 1964 at the I-70 interchange and continued progressively through many years proceeding south through Aurora until final completion in 1976 with the final link between Yosemite Street and I-25.

Interstate 840 (I-840) is an Interstate Highway in the U.S. state of North Carolina. It is currently in two sections traversing 16.6 miles (26.7 km) total in Guilford County; when completed, it will form the northern half of the Greensboro Urban Loop.

E-470 is a 47-mile-long (76 km) controlled-access toll road traversing the eastern portion of the Denver-Aurora Metropolitan Area in the US state of Colorado. The toll road is not a state highway, but is instead owned and maintained by the E-470 Public Highway Authority, which is controlled by a governing board of eight elected officials of eight local governments. Construction and operation involves no state or federal funding or taxes, with the exception of a $10 fee originally charged on vehicle registrations for residents of Arapahoe, Adams and Douglas counties. As of 2016, 85% of the road's revenues came from tolls.

Interstate 40 (I-40) is a major east–west Interstate Highway in the United States, stretching from Barstow, California, to Wilmington, North Carolina. The segment of I-40 in California is sometimes called the Needles Freeway. It goes east from its western terminus at Interstate 15 in Barstow across the Mojave Desert in San Bernardino County past the Clipper Mountains to Needles, before it crosses over the Colorado River into Arizona east of Needles. All 155 miles (249 km) of I-40 in California are in San Bernardino County.

Interstate 69 (I-69) is an Interstate Highway in the U.S. state of Texas that is planned to pass through the eastern part of the state and along the Gulf Coast to Victoria, where it will split into multiple segments with I-69E terminating in Brownsville, I-69C terminating in Pharr, and I-69W terminating in Laredo. The first segment of I-69 in Texas was opened in 2011 near Corpus Christi. The American Association of State Highway and Transportation Officials (AASHTO) approved an additional 53 miles (85 km) of US 77 from Brownsville to Raymondville for designation as I-69, which was to be signed as I-69E upon concurrence from the Federal Highway Administration (FHWA). FHWA approval for this segment was announced on May 29, 2013. By March 2015, a 74.9 mile section of US-59 had been completed and designated as I-69 through the Houston Metropolitan Area.

All of the business loops within Texas are maintained by the Texas Department of Transportation (TxDOT). Interstate 20 has fifteen business loops in the state, all located in western Texas. Along I-20, TxDOT identifies each business route as Business Interstate 20 followed by an alphabetic suffix. Along Texas Interstates, the alphabetic suffixes on business route names ascend eastward and northward. There are gaps in the alphabetic values to allow for future system expansion. The alphabetic naming suffixes are included as small letters on the bottom of route shields.