This is an alphabetical list of painters who are known for painting in the Nihonga style. It has to be noted that some artists also painted in the western Yōga style, and that the division between the two groups could be blurred at points.

Artists are listed by the native order of Japanese names, family name followed by given name, to ensure consistency even though some artists may be known outside Japan by their western-ordered name.

The list is broken down into the period during which the artist was first active: Meiji, Taishō, Shōwa and Heisei era.

The Rōjū (老中), usually translated as Elder, was one of the highest-ranking government posts under the Tokugawa shogunate of Edo period Japan. The term refers either to individual Elders, or to the Council of Elders as a whole; under the first two shōguns, there were only two Rōjū. The number was then increased to five, and later reduced to four. The Rōjū were appointed from the ranks of the fudai daimyōs with domains of between 25,000 and 50,000 koku.

Hideo (ひでお) is a masculine Japanese given name. Notable people with the name include: 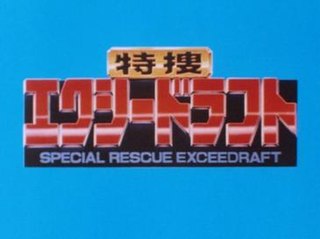 Special Rescue Exceedraft is the last part of the Rescue Police Series trilogy in Toei Company's Metal Hero Series franchise of superhero TV series. It was aired in Japan from February 2, 1992 to January 24, 1993. The series was initially conceived as taking place in a new continuity, leading to weaker ties to Solbrain and Winspector, but have since been contradicted by these shows produced in that year as Metal Heroes Series was ended in 1999.

PLATİCA Inc., based in Tokyo, Japan, is a talent agency whose CEO is Hiroshi Fujita (藤田博士).

The Japanese Film Festival is a film festival held in Singapore and dedicated to Japanese cinema. It was held annually from 1999 to 2016, and curated with Singapore audiences in mind, led by local programmers with a wide ranging programme of film classics, Japanese independents and commercial releases. There was no festival in 2017. Under new direction from 2018 from the Japan Foundation in Tokyo, it has shifted its focus to screening mainly commercial releases from Japan.

Hiroaki is a masculine Japanese given name. Notable people with the name include:

Shōhei, Shohei or Shouhei is a masculine Japanese given name. Notable people with the name include: