U.S. Route 491 (US 491) is a north–south U.S. Highway serving the Four Corners region of the United States. One of the newest designations in the U.S. Highway System, it was created in 2003 as a renumbering of U.S. Route 666 (US 666). With the 666 designation, this road was nicknamed the "Devil's Highway" because of the significance of the number 666 to many Christian denominations, which is the Number of the Beast. This Satanic connotation, combined with a high fatality rate along the New Mexico portion, convinced some people the highway was cursed. The problem was compounded by persistent sign theft. These factors led to two efforts to renumber the highway, first by officials in Arizona, later in New Mexico. There have been safety improvement projects in recent years, and fatality rates have subsequently decreased.

Interstate 225 (I-225) is a 11.959 mile (19.246 km) connector spur route of Interstate 25 in Colorado. It is the only auxiliary route of Interstate 25, and one of two auxiliary Interstate highways in the state of Colorado. I-225 traverses Aurora and small portions of Denver and Greenwood Village. It runs north from Interstate 25 to Interstate 70. It intersects with state highway 83, state highway 30 and Interstate 70 Business/U.S. Highway 40/U.S. Highway 287, known locally as Colfax Avenue. Construction on the freeway began in 1964 at the I-70 interchange and continued progressively through many years proceeding south through Aurora until final completion in 1976 with the final link between Yosemite Street and I-25.

U.S. Route 6 (US 6) is a part of the U.S. Highway System that travels from Bishop, California, to Provincetown, Massachusetts. In the U.S. state of Colorado, US 6 is an east–west highway stretching from Utah to Nebraska. Much of the route overlaps other highways in Colorado, and as a result, much of US 6 is unsigned.

The Colorado Department of Transportation is the principal department of the Colorado state government that administers state government transportation responsibilities in the state. CDOT is responsible for maintaining 9,144 mile highway system, including 3,429 bridges with over 28 billion vehicle miles of travel per year. CDOT's Mission is "To provide the best multi-modal transportation system for Colorado that most effectively moves people, goods, and information." 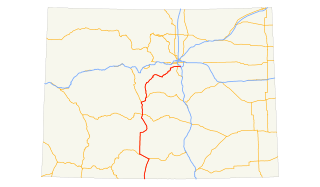 U.S. Route 285 is the section north-south highway in Colorado that starts at the New Mexico state line and ends at I-25, US 87, and SH 30 in Denver.