A Venus-crosser is an asteroid whose orbit crosses that of Venus. There are 2,809 [1] Venus-crosser and 98 outer-grazers known. [2] Mercury-crossers or grazers are marked ‡.

Venus also has a quasi-satellite, (524522) 2002 VE68. This asteroid is also a Mercury- and Earth-crosser; it seems to have been a "companion" to Venus for the last 7,000 years or so only, and is destined to be ejected from this orbital arrangement about 500 years from now. [3] 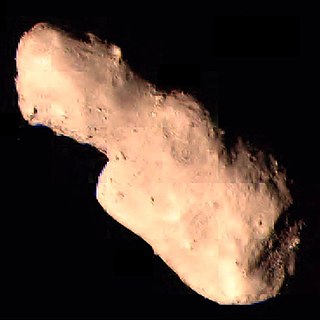 4179 Toutatis, provisional designation 1989 AC, is an elongated, stony asteroid and slow rotator, classified as near-Earth object and potentially hazardous asteroid of the Apollo and Alinda group, approximately 2.5 kilometers in diameter. Discovered by French astronomer Christian Pollas at Caussols in 1989, the asteroid was named after Toutatis from Celtic mythology.

Francesco Manca is an Italian amateur astronomer and discoverer of minor planets at the Sormano Astronomical Observatory in northern Italy. 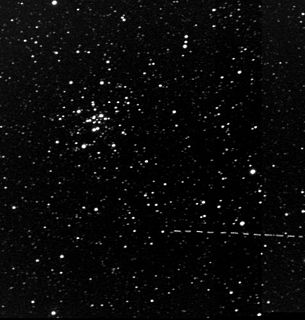 (33342) 1998 WT24 is a bright, sub-kilometer asteroid, classified as near-Earth object and potentially hazardous asteroid (PHA) of the Aten group, located in Venus's zone of influence that has frequent close encounters with Mercury, Venus, and Earth. It made a close approach to Earth on 11 December 2015, passing at a distance of about 4.2 million kilometers (2.6 million miles, 11 lunar distances) and reaching about apparent magnitude 11.

The Cybele asteroids are a dynamical group of asteroids, named after the asteroid 65 Cybele. Considered by some as the last outpost of an extended asteroid belt, the group consists of nearly 2000 members and a few collisional families. The Cybeles are in a 7:4 orbital resonance with Jupiter. Their orbit is defined by an osculating semi-major axis of 3.28 to 3.70 AU, with an eccentricity of less than 0.3, and an inclination less than 25°. 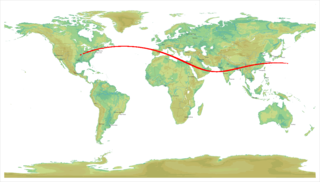 Sentry is a highly automated impact prediction system operated by the JPL Center for NEO Studies (CNEOS) since 2002. It continually monitors the most up-to-date asteroid catalog for possibilities of future impact with Earth over the next 100+ years. Whenever a potential impact is detected it will be analyzed and the results immediately published by the Center for Near-Earth Object Studies. However, several weeks of optical data are not enough to conclusively identify an impact years in the future. By contrast, eliminating an entry on the risk page is a negative prediction; a prediction of where it will not be.

(524522) 2002 VE68, provisional designation 2002 VE68, is a sub-kilometer sized asteroid and temporary quasi-satellite of Venus. It was the first such object to be discovered around a major planet in the Solar System. In a frame of reference rotating with Venus, it appears to travel around it during one Venerean year but it actually orbits the Sun, not Venus. 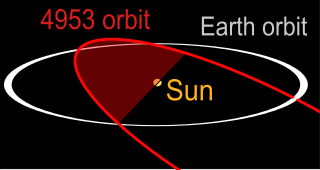 Minimum orbit intersection distance (MOID) is a measure used in astronomy to assess potential close approaches and collision risks between astronomical objects. It is defined as the distance between the closest points of the osculating orbits of two bodies. Of greatest interest is the risk of a collision with Earth. Earth MOID is often listed on comet and asteroid databases such as the JPL Small-Body Database. MOID values are also defined with respect to other bodies as well: Jupiter MOID, Venus MOID and so on.

(322756) 2001 CK32 is a sub-kilometer asteroid and near-Earth object of the Aten group. It is also a transient Venus co-orbital, and a Mercury grazer as well as an Earth crosser. It was once designated as a potentially hazardous asteroid.

(445473) 2010 VZ98, provisional designation 2010 VZ98, is a trans-Neptunian object of the scattered disc, orbiting the Sun in the outermost region of the Solar System. It has a diameter of approximately 400 kilometers.

2012 XE133 is an asteroid, classified as near-Earth object of the Aten group that is a temporary co-orbital of Venus.