As of 2020, the National Committee of Macroprudential Oversight of Romania has identified 9 banks as systematically important and thus have to meet more stringent requirements: [7]

Since 1989, modern skyscrapers and glass-fronted hotels have altered the skyline of Cluj-Napoca, a city in the Transylvanian region of Romania.

Banca Transilvania S.A. is a banking institution with headquarters in Cluj-Napoca, Romania. The bank was founded in 1993 in Cluj-Napoca by a local business people group, with a capital of 2 billion RON, of which 79% was Romanian and 21% foreign. In 2014, Banca Transilvania celebrates 20 years since it became operational, with the opening of Cluj branch.

Constantin Mugur Isărescu is the Governor of the National Bank of Romania, a position he held since September 1990, with the exception of an eleven months period, during which he served as Prime Minister of Romania. He is a member of the Romanian Academy. 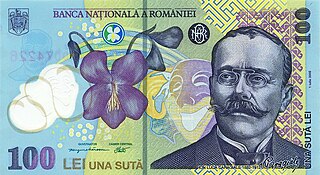 First Bank is a Romanian bank, owned and managed by U.S. investment firm J.C. Flowers & Co.. The bank was established in 1995 as Pater Bank, after which it was acquired and renamed by Piraeus Bank in 2000.

The National Bank of Romania is the central bank of Romania and was established in April 1880. Its headquarters are located in the capital city of Bucharest.

Banca Comercială Română (BCR), a member of Erste Group, is the most important financial group in Romania, including operations of universal bank, as well as specialized companies on the leasing market, assets management, private pensions, housing banks and banking services through mobile phone. BCR is No. 1 bank in Romania on the assets value, No. 1 Bank by number of clients and No. 1 bank by savings and financing segments. BRD – Groupe Société Générale is a Romanian bank which is based in Bucharest, Romania. It was founded in 1923 and is currently the third largest bank by assets in Romania. 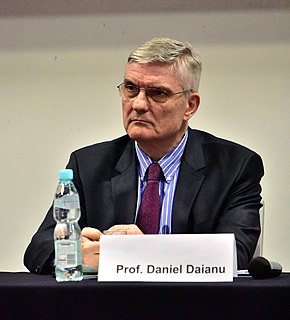 Daniel Dăianu is a Romanian economist, professor, and politician.

BCR Chișinău is a subsidiary of Banca Comercială Română (BCR) in the Republic of Moldova, member of Erste Group. BCR Chișinău is one of the first foreign capital owned banks in Moldova, which is a member of an international financial group.

ProCredit Bank is a commercial bank based in Bucharest, Romania. It was founded in 2002 as Banca de Microfinantare MIRO and was renamed in December 2004.

Aneta Bogdan is a Romanian branding, corporate identity and marketing consultant. She is co-founder and managing partner of brand and design company Brandient, which operates from Bucharest and Singapore. She is considered a pioneer in the branding discipline in Romania and was included in the top 100 "Most Powerful Business Women in Romania" in 2012, as well as in other relevant business publications, such as "Who’s Who in Business Romania 2018", made by Ziarul Financiar.

Emilian Necula, known also as Emil Necula is a Romanian former rugby union player. He played as Number 8. He is nicknamed Ene.

Dacia Felix Bank was the second private bank established in Romania after the Romanian Revolution. It was founded in Cluj-Napoca in March 1991.