The United States military has numerous types of watercraft, operated by the Navy, including Naval Special Warfare Command and Military Sealift Command, as well as the Coast Guard, Army and Air Force

(sub-variant of the expeditionary transfer dock)

The USCG seagoing buoy tender is a type of United States Coast Guard cutter used to service aids to navigation throughout the waters of the United States and wherever American shipping interests require. The U.S. Coast Guard has maintained a fleet of seagoing buoy tenders dating back to its origins in the U.S. Light House Service (USLHS). These ships originally were designated with the hull classification symbol WAGL, but in 1965 the designation was changed to WLB, which is still used today.

United States Coast Guard Cutter is the term used by the U.S. Coast Guard for its commissioned vessels. They are 65 feet (19.8 m) or greater in length and have a permanently assigned crew with accommodations aboard. They carry the ship prefix USCGC.

USCGC Juniper (WLB-201) is the lead ship of the U.S. Coast Guard's current class of seagoing buoy tenders. She is outfitted with some of the most advanced technological and navigational capabilities currently available.

USCGC Fir (WLB-213) is a Juniper-class cutter of the United States Coast Guard. USCGC Fir is under the Operational Control (OPCON) of the Commander of the Thirteenth Coast Guard District and is homeported in Astoria, Oregon. Fir's primary area of responsibility is the coastal waters, river bars and high seas of the Washingtonian and Oregonian coasts. USCGC Fir conducts heavy lift aids to navigation operations, law enforcement and other missions as directed. 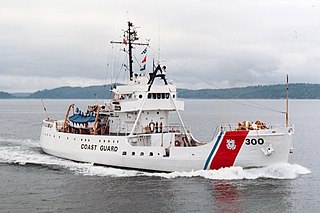 USCGC Cahoone (WPC/WSC/WMEC-131) was an Active-class patrol boat of the United States Coast Guard. Launched in 1927, she served until 1968.

The Active-class patrol boat was one of the most useful and long-lasting classes of United States Coast Guard cutters. Of the 35 built in the 1920s, 16 were still in service during the 1960s. The last to be decommissioned from active service was the Morris in 1970; the last in actual service was the Cuyahoga, which sank after an accidental collision in 1978.

USCGC Cypress (WLB-210) is a United States Coast Guard cutter and the tenth Juniper-class seagoing buoy tender. She is outfitted with advanced technological and navigational capabilities that allow her to be positioned correctly for exact placement of buoys through the use of controllable-pitch propellers and stern and bow thrusters. 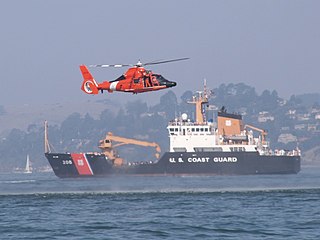 USCGC Aspen (WLB-208) is the eighth cutter in the Juniper-class 225 ft (69 m) of seagoing buoy tenders. She is under the operational control of the Commander of the Eleventh U.S. Coast Guard District and is home-ported at Yerba Buena Island in San Francisco, California. Her primary area of responsibility is the coastal waters, river bars and high seas from the California–Oregon border to San Diego, California. Aspen conducts heavy lift aids-to-navigation operations, and law enforcement, homeland security, environmental pollution response, and search and rescue as directed.

USCGC Kukui (WLB-203) is the third cutter in the Juniper-class 225 ft (69 m) of seagoing buoy tenders and is the third ship to bear the name. She is under the operational control of the Commander of the Seventeenth Coast Guard District and is home-ported in Sitka, Alaska. Her primary area of responsibility is the inland and coastal waters of southeastern Alaska. Kukui conducts heavy lift aids-to-navigation operations, and law enforcement, homeland security, environmental pollution response, and search and rescue as directed.