The emperor was the supreme head of government. [7] He appointed all of the highest-ranking officials in central, provincial, commandery, and county administrations. [8] He also functioned as a lawgiver, the highest court judge, commander-in-chief of the armed forces, and high priest of the state-sponsored religious cults. [9]

In ancient China, the rulers of the Shang (c. 1600 – c. 1050 BC) and Zhou (c. 1050 – 256 BC) dynasties were referred to as kings (王 wang). [11] By the time of the Zhou dynasty, they were also referred to as Sons of Heaven (天子 Tianzi). [11] By 221 BC, the King of Qin, Ying Zheng, conquered and united all the Warring States of ancient China. To elevate himself above the Shang and Zhou kings of old, he accepted the new title of emperor (皇帝 huangdi) and is known to posterity as the First Emperor of Qin (Qin Shi Huang). The new title of emperor was created by combining the titles for the Three Sovereigns (Sanhuang) and Five Emperors (Wudi) from Chinese mythology. [12] This title was used by each successive ruler of China until the fall of the Qing dynasty in 1911. [13]

Since six was considered a lucky number, Han Emperors Jing and Wu changed the year count of their reigns back to the beginning every six years. [15] Since every six-year period was successively marked as yuannian (元年), eryuan (二元), sanyuan (三元), and so forth, this system was considered too cumbersome by the time it reached the fifth cycle wuyuan sannian (五元三年) in 114 BC. [15] In that year a government official suggested that the Han court retrospectively rename every "beginning" with new characters, a reform Emperor Wu accepted in 110 BC. [16] Since Emperor Wu had just performed the religious feng (封) sacrifice at Mount Taishan, he named the new era yuanfeng (元封). This event is regarded as the formal establishment of era names in Chinese history. [16] Emperor Wu changed the era name once more when he established the 'Great Beginning' (太初 Taichu) calendar in 104 BC. [17] From this point until the end of Western Han, the court established a new era name every four years of an emperor's reign. By Eastern Han there was no set interval for establishing new era names, which were often introduced for political reasons and celebrating auspicious events. [17]

At times, especially when an infant emperor was placed on the throne, a regent, often the empress dowager or one of her male relatives, would assume the duties of the emperor until he reached his majority. Sometimes the empress dowager's faction—the consort clan—was overthrown in a coup d'état. For example, Empress Lü Zhi (d. 180 BC) was the de facto ruler of the court during the reigns of the child emperors Qianshao (r. 188–184 BC) and Houshao (r. 184–180 BC). [18] Her faction was overthrown during the Lü Clan Disturbance of 180 BC and Liu Heng was named emperor (posthumously known as Emperor Wen). [19] Before Emperor Wu died in 87 BC, he had invested Huo Guang (d. 68 BC), Jin Midi (d. 86 BC), and Shangguan Jie (上官桀)(d. 80 BC) with the power to govern as regents over his successor Emperor Zhao of Han (r. 87–74 BC). Huo Guang and Shangguan Jie were both grandfathers to Empress Shangguan (d. 37 BC), wife of Emperor Zhao, while the ethnically-Xiongnu Jin Midi was a former slave who had worked in an imperial stable. After Jin died and Shangguan was executed for treason, Huo Guang was the sole ruling regent. Following his death, the Huo-family faction was overthrown by Emperor Xuan of Han (r. 74–49 BC), in revenge for Huo Guang poisoning his wife Empress Xu Pingjun (d. 71 BC) so that he could marry Huo's daughter Empress Huo Chengjun (d. 54 BC). [20]

Since regents and empress dowagers were not officially counted as emperors of the Han dynasty, they are excluded from the list of emperors below.

Below is a complete list of emperors of the Han dynasty, including their personal, posthumous, and era names. Excluded from the list are de facto rulers such as regents and empress dowagers.

Year 106 (CVI) was a common year starting on Thursday of the Julian calendar. At the time, it was known as the Year of the Consulship of Commodus and Civica. The denomination 106 for this year has been used since the early medieval period, when the Anno Domini calendar era became the prevalent method in Europe for naming years.

The Three Kingdoms from 220 to 280 AD was the tripartite division of China among the states of Wei, Shu, and Wu. The Three Kingdoms period started with the end of the Han dynasty and was followed by the Jin dynasty. The short-lived Yan kingdom on the Liaodong Peninsula, which lasted from 237 to 238, is sometimes considered as a "4th kingdom". 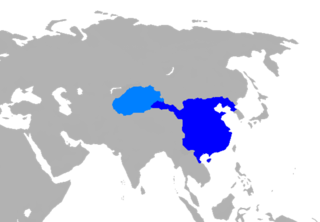 The Han dynasty was the second imperial dynasty of China, established by Liu Bang and ruled by the House of Liu. Preceded by the short-lived Qin dynasty and a warring interregnum known as the Chu–Han contention, it was briefly interrupted by the Xin dynasty established by the usurping regent Wang Mang, and was separated into two periods—the Western Han and the Eastern Han (25–220 AD)—before being succeeded by the Three Kingdoms period. Spanning over four centuries, the Han dynasty is considered a golden age in Chinese history, and influenced the identity of the Chinese civilization ever since. Modern China's majority ethnic group refers to themselves as the "Han people", the Sinitic language is known as "Han language", and the written Chinese is referred to as "Han characters". 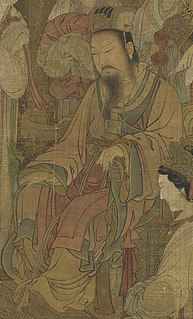 Emperor Wen of Han, born Liu Heng, was the emperor of the Western Han dynasty in China from 180 to his death in 157 BCE. The son of Emperor Gao and Consort Bo, his reign provided a much needed stability after the unstable and violent regency of Empress Lü. The prosperous reigns of Wen and his son Emperor Jing are highly regarded by historians, being referred to as the Rule of Wen and Jing. 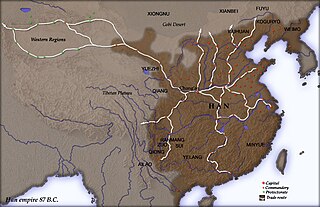 The Wuhuan were a Proto-Mongolic nomadic people who inhabited northern China, in what is now the provinces of Hebei, Liaoning, Shanxi, the municipality of Beijing and the autonomous region of Inner Mongolia.

Huan Tan was a Chinese philosopher, poet, and politician of the Western Han and its short-lived interregnum between AD 9 and 23, known as the Xin Dynasty. 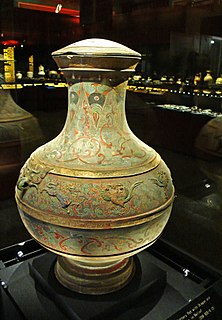 Sang Hongyang was a Chinese politician. He was a prominent official of the Han Dynasty, who served Emperor Wu of Han and his successor Emperor Zhao. He is famous for his economic policies during the reign of Emperor Wu, the best known of which include the state monopolies over iron and salt - systems which would be imitated by other dynasties throughout Chinese history. Due to political conflict, he was executed in 80 BC by Huo Guang.

The Han dynasty was the second imperial dynasty of China. It followed the Qin dynasty, which had unified the Warring States of China by conquest. It was founded by Liu Bang. The dynasty is divided into two periods: the Western Han and the Eastern Han, interrupted briefly by the Xin dynasty of Wang Mang. These appellations are derived from the locations of the capital cities Chang'an and Luoyang, respectively. The third and final capital of the dynasty was Xuchang, where the court moved in 196 CE during a period of political turmoil and civil war. 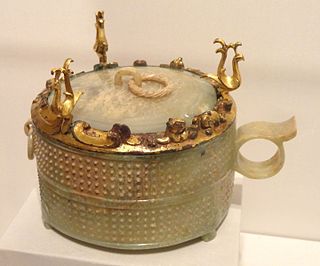 The economy of Han dynasty of ancient China experienced upward and downward movements in its economic cycle, periods of economic prosperity and decline. It is normally divided into three periods: Western Han, the Xin dynasty, and Eastern Han. The Xin regime, established by the former regent Wang Mang, formed a brief interregnum between lengthy periods of Han rule. Following the fall of Wang Mang, the Han capital was moved eastward from Chang'an to Luoyang. In consequence, historians have named the succeeding eras Western Han and Eastern Han respectively.

The Han dynasty was a period of Imperial China divided into the Western Han and Eastern Han periods, when the capital cities were located at Chang'an and Luoyang, respectively. It was founded by Emperor Gaozu of Han and briefly interrupted by the regime of Wang Mang who usurped the throne from a child Han emperor. 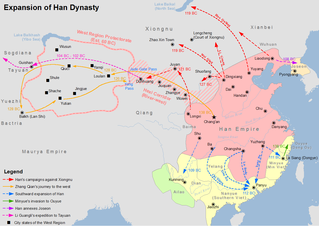 The Han conquest of Nanyue was a military conflict between the Han Empire and the Nanyue kingdom in modern Guangdong, Guangxi, and Northern Vietnam. During the reign of Emperor Wu, the Han forces launched a punitive campaign against Nanyue and conquered it in 111 BC.

The Han campaigns against Minyue were a series of three Han military campaigns dispatched against the Minyue state. The first campaign was in response to Minyue's invasion of Eastern Ou in 138 BC. In 135 BC, a second campaign was sent to intervene in a war between Minyue and Nanyue. After the campaign, Minyue was partitioned into Minyue, ruled by a Han proxy king, and Dongyue. Dongyue was defeated in a third military campaign in 111 BC and the former Minyue territory was annexed by the Han Empire.

The Han conquest of Dian was a series of military campaigns and expeditions by the Chinese Han dynasty recorded in contemporary textual sources against the Kingdom of Dian in modern Yunnan. Dian was placed under Han rule in 109 BC, after Emperor Han Wudi dispatched an army against the kingdom as the empire expanded southward.

The Ministry of Ceremonies was one of the nine ministries of the Chinese Han dynasty. The Minister of Ceremonies, also known as Grand Master of Ceremonies, was the chief official in charge of religious rites, rituals, prayers, and the maintenance of ancestral temples and altars. The role's title was changed to Upholder of Ceremonies from 195 to 144 BC before reverting to the original title. Although his main concern was to link the emperor with the supernatural world and Heaven, he was also given the task of setting educational standards for the Imperial University and the academic chairs who specialized in the Five Classics, the canon of Confucianism.

This is a timeline of the Han dynasty. 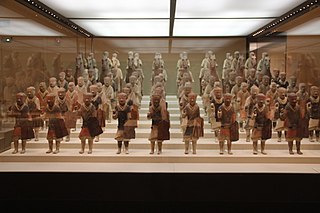 The military of the Han dynasty was the military apparatus of China from 202 BC to 220 AD, with a brief interregnum by the reign of Wang Mang and his Xin dynasty from 9 AD to 23 AD, followed by two years of civil war before the refounding of the Han.