Referred to as pre-cellular (or sometimes zero generation, that is, 0G mobile ) systems.

1G or (1-G) refers to the first generation of wireless telephone technology (mobile telecommunications). These are the analog telecommunication standards that were introduced in 1979 and the early to mid-1980s and continued until being replaced by 2G digital telecommunications. The main difference between the two mobile telephone systems (1G and 2G), is that the radio signals used by 1G network are analog, while 2G networks are digital.

2G (or 2-G) provides three primary benefits over their predecessors: phone conversations are digitally encrypted; 2G systems are significantly more efficient on the spectrum allowing for far greater mobile phone penetration levels; and 2G introduced data services for mobile, starting with SMS (Short Message Service) plain text-based messages. 2G technologies enable the various mobile phone networks to provide the services such as text messages, picture messages and MMS (Multimedia Message Service). It has 3 main services: Bearer services is one of them which is also known as data services and communication.

Second generation 2G cellular telecom networks were commercially launched on the GSM standard in Finland by Radiolinja (now part of Elisa Oyj) in 1991. [1]

The North American Standards IS-54 and IS-136 were also second-generation (2G) mobile phone systems, known as (Digital AMPS) and used TDMA with three time slots in each 30 kHz channel, supporting 3 digitally compressed calls in the same spectrum as a single analog call in the previous AMPS standard. This was later changed to 6 half rate time slots for more compressed calls. It was once prevalent throughout the Americas, particularly in the United States and Canada since the first commercial network was deployed in 1993 on AT&T and Rogers Wireless Networks.

IS-95 was the first ever CDMA-based digital cellular technology. It was developed by Qualcomm using Code Division Multiple Access and later adopted as a standard by the Telecommunications Industry Association in TIA/EIA/IS-95 release published in 1995. It was marketed as CDMAOne and deployed globally including China Unicom in 2002 and Verizon in the United States, competing directly with IS-95 services offered by AT&T.

GPRS networks evolved to EDGE networks with the introduction of 8PSK encoding.

CDMA2000 is a family of 3G mobile technology standards for sending voice, data, and signaling data between mobile phones and cell sites. It is a backwards-compatible successor to second-generation cdmaOne (IS-95) set of standards and used especially in North America and South Korea, China, Japan, Australia and New Zealand. It was standardized in the international 3GPP2 standards body, The name CDMA2000 denotes a family of standards that represent the successive, evolutionary stages of the underlying technology. These are:

3.5G is a grouping of disparate mobile telephony and data technologies designed to provide better performance than 3G systems, as an interim step towards the deployment of full 4G capability. The technology includes:

LTE (Long Term Evolution) is commonly marketed as 4G LTE, but it did not initially meet the technical criteria of a 4G wireless service, as specified in the 3GPP Release 8 and 9 document series for LTE Advanced. Given the competitive pressures of WiMax and its evolution with Advanced new releases, it has become synonymous with 4G. It was first commercially deployed in Norway and Stockholm in 2009 and in the United States by Verizon in 2011 in their newly acquired 700 MHz band.

4.5G provides better performance than 4G systems, as a process step towards deployment of full 5G capability. [2] The technology includes:

5G is a generation currently under development. It denotes the next major phase of mobile telecommunications standards beyond the current 4G/IMT-Advanced standards.

Next Generation Mobile Networks Alliance feel that 5G should be rolled out by 2020 to meet business and consumer demands. [4] In addition to simply providing faster speeds, they predict that 5G networks will also need to meet the needs of new use-cases such as the Internet of things (IoT) as well as broadcast-like services and lifeline communications in times of disaster.

Enhanced Data rates for GSM Evolution (EDGE) is a digital mobile phone technology that allows improved data transmission rates as a backward-compatible extension of GSM. EDGE is considered a pre-3G radio technology and is part of ITU's 3G definition. EDGE was deployed on GSM networks beginning in 2003 – initially by Cingular in the United States. 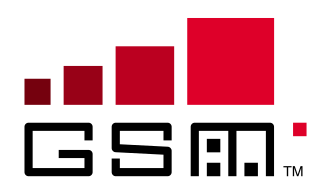 The 3rd Generation Partnership Project (3GPP) is an umbrella for a number of standards organizations which develops protocols for mobile telecommunications. Its best known work is the development and maintenance of: 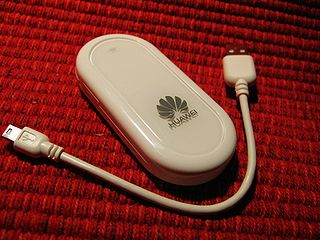 CDMA2000 is a family of 3G mobile technology standards for sending voice, data, and signaling data between mobile phones and cell sites. It is developed by 3GPP2 as a backwards-compatible successor to second-generation cdmaOne (IS-95) set of standards and used especially in North America and South Korea. 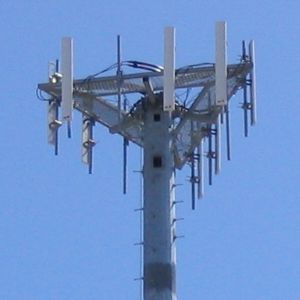 A cellular network or mobile network is a communication network where the last link is wireless. The network is distributed over land areas called "cells", each served by at least one fixed-location transceiver, but more normally, three cell sites or base transceiver stations. These base stations provide the cell with the network coverage which can be used for transmission of voice, data, and other types of content. A cell typically uses a different set of frequencies from neighbouring cells, to avoid interference and provide guaranteed service quality within each cell. 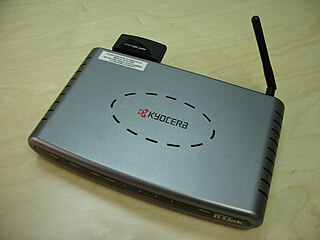 Evolution-Data Optimized is a telecommunications standard for the wireless transmission of data through radio signals, typically for broadband Internet access. EV-DO is an evolution of the CDMA2000 (IS-2000) standard which supports high data rates and can be deployed alongside a wireless carrier's voice services. It uses advanced multiplexing techniques including code division multiple access (CDMA) as well as time division multiplexing (TDM) to maximize throughput. It is a part of the CDMA2000 family of standards and has been adopted by many mobile phone service providers around the world particularly those previously employing CDMA networks. It is also used on the Globalstar satellite phone network. 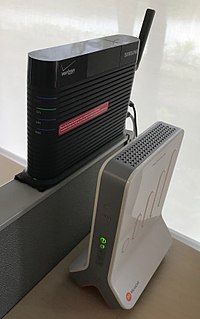 In telecommunications, a femtocell is a small, low-power cellular base station, typically designed for use in a home or small business. A broader term which is more widespread in the industry is small cell, with femtocell as a subset. It is also called femto AccessPoint (AP). It connects to the service provider's network via broadband ; current designs typically support four to eight simultaneously active mobile phones in a residential setting depending on version number and femtocell hardware, and eight to sixteen mobile phones in enterprise settings. A femtocell allows service providers to extend service coverage indoors or at the cell edge, especially where access would otherwise be limited or unavailable. Although much attention is focused on WCDMA, the concept is applicable to all standards, including GSM, CDMA2000, TD-SCDMA, WiMAX and LTE solutions. 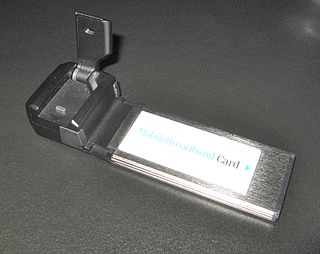 In telecommunications, Long-Term Evolution (LTE) is a standard for wireless broadband communication for mobile devices and data terminals, based on the GSM/EDGE and UMTS/HSPA technologies. It increases the capacity and speed using a different radio interface together with core network improvements. The standard is developed by the 3GPP and is specified in its Release 8 document series, with minor enhancements described in Release 9. LTE is the upgrade path for carriers with both GSM/UMTS networks and CDMA2000 networks. The different LTE frequencies and bands used in different countries mean that only multi-band phones are able to use LTE in all countries where it is supported.